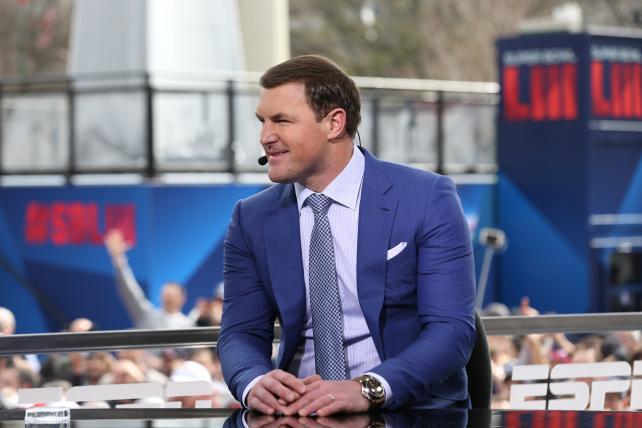 Ten months after ESPN took the wraps off its all-new "Monday Night Football" broadcast team, the network finds itself in need of another reboot. Color commentator Jason Witten on Thursday announced he'll be rejoining the Dallas Cowboys for what will be his sixteenth season with the team, leaving a tight end-sized hole in ESPN's booth.

Dallas will pay the 11-time Pro Bowler a reported $3.5 million to wear the No. 82 jersey for another season, or about $1 million less than he was making as an ESPN employee. And while 36-year-old Witten's decision to come out of retirement means he'll be subjecting his none-too-youthful body to the chamber of horrors that is the NFL schedule, in choosing to play football again, he'll be free of the constant criticism that came with his broadcasting gig.

Unlike fellow Cowboy Tony Romo, who in just two years in the CBS booth has elevated himself to some sort of omniscient demigod, Witten struggled mightily during his brief "Monday Night Football" tenure. Among his malapropisms was saying that Aaron Rodgers "pulled a rabbit out of his head."

Later in the same broadcast, Witten exclaimed, "San Francisco cannot keep kicking themselves in the foot like that!" As one might expect, Twitter was quick to roast Witten for his verbal fumbles. In what would prove to be his final act as a broadcaster, Witten managed to break the Pro Bowl trophy as he presented it to MVPs Jamal Adams and Patrick Mahomes. Adams' reaction was meme-worthy.

Despite all the criticism directed at Witten, ESPN seemed prepared to give its three-man crew another season to gel. Until today's news broke, Witten, play-by-play caller Joe Tessitore and sideline analyst Booger McFarland were set to return in the fall. The network appeared to be caught off-guard by the announcement, playing catch-up with a statement issued some 90 minutes after the Cowboys' front office welcomed Witten back into the fold.

"We thank Jason for his many contributions to 'Monday Night Football' and to ESPN over the past year and wish him continued success," the network's statement read. "We have seen many former coaches and players go into broadcasting before eventually returning to the game they love, so we understand Jason's desire to return to the Dallas Cowboys."

ESPN said it will determine its game plan for "Monday Night Football" in the coming weeks, and while a number of homegrown candidates may be considered for the plum role—Louis Riddick and Matt Hasselbeck are among the network's most qualified football analysts—the most sought-after personality is the ubiquitous pitchman and two-time Super Bowl champ Peyton Manning. But despite his ease in front of the camera, comedic chops and encyclopedic football mind, Manning hasn't seemed all that interested in pursuing a career in a blazer. NFL Network's Kurt Warner, who has called "Monday Night Football" games for Westwood Radio One, is also a viable option.

The online betting site OddsShark has booked Manning as the favorite at 2/1, while Riddick is the runner-up at 9/4. At 100/1 odds, meaning a $100 bet would win you a cool $10,000, the 82-year-old John Madden is the biggest long shot on the list. Madden retired in 2009 after having worked as a color analyst for each of the Big Four networks.

After seven seasons of stability, the "Monday Night Football" booth of late has been in an extended transitional phase. Lead analyst Mike Tirico decamped for NBC in 2016, leaving color analyst Jon Gruden to team up with college football and MLB signal caller Sean McDonough. Gruden in turn left ESPN last winter to rejoin the Oakland Raiders as head coach, whereupon McDonough went back to the college game. Witten, Tessitore and McFarland were introduced as the new "Monday Night Football" crew in May 2018.