NEW YORK (AdAge.com) -- Many media people groaned last year when ads started appearing regularly on major magazine covers, where editors put their best face forward and advertising had long been taboo. Now some new research is going to complicate any hope of turning cover ads back. 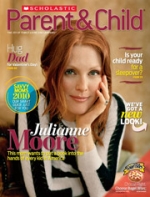 That won't eliminate the worries that readers won't like the ads and will distrust the magazines that run them. "The short-term gain is outweighed by the long-term damage to the editorial integrity of the publication, which in turn devalues the magazine as a vehicle for advertising," said Sid Holt, CEO of the American Society of Magazine Editors. Most magazines agree, continuing to refuse ads on the front cover.

But the research could make cover ads more popular among advertisers and even harder for publishers to resist.

Scholastic Parent & Child, the magazine that's most committed to the new tactic, has been running cover ads for brands including Juicy Juice, SunnyD Smoothies and PediaSure almost every month since its April 2009 issue.

The three Parent & Child front cover ads that Vista studied generated some action among 73% of readers, on average, topping the title's average scores for action taken over the last three years: 71% for ads opposite the table of contents, 66% for either the back cover or the inside front cover, and 65% for the inside back cover. "Actions" in the research include steps such as saving an ad for future reference, visiting a website or store, or buying the product or service.

Better recall than other top spots
The front cover ads, for another example, averaged a 78% total recall score, the best of any premium ad position in the magazine, according to Vista. The back cover and the page opposite the table of contents tied for second place, averaging 69% total recall.

Readers haven't complained about the ads at all, according to Ms. Crandall. "Print consumers are more open to creativity than sometimes we give them credit for," she said. "Sometimes we think they're old school. The internet's changed all that. People's acceptability of these things has changed. Especially because newspapers started taking ads on the cover, and I think of newspapers as more conventional."

Front cover ads, of course, don't always outperform other positions. Front cover ads so far have been small, typically occupying a small corner or a short strip across the bottom; ads on the inside front cover or back cover have a much fuller canvas with which to work. And it depends what each ad is trying to do and trying to promote.

All not created equal
The ad for a Thomas & Friends DVD on Scholastic Parent & Child's November front cover, for example, scored 85% for total recall -- much better than the 64% recall averaged by ads throughout that issue. But that front cover ad only produced action among 65% of readers, somewhat lower than the 69% action score averaged by ads across the issue.

The Thomas & Friends ad received a slightly lower action score because the product targets moms with children only between 2 and 5 years old, just a portion of Parent & Child's audience, Ms. Crandall said.

Other publishers have been trying ads that involve the front covers without actually running ads on the cover itself. Some titles, for example, have nested a loose ad page inside the cover with a tab instructing readers to pull the ad out. Others have run paper flaps on the cover that open to reveal ad and editorial messages. Vista research on those sorts of executions last year showed results similar to more straightforward front-cover ad placements: Many outperformed other high-profile places ads can appear in magazines, but not in every case and not by every measure.

"Front cover ads, at least the ones we've been able to measure so far, show that they can be as effective, and even more effective, than some of the traditional premium positions," said Tom Robinson, managing director at Affinity. "It does depend on the execution."