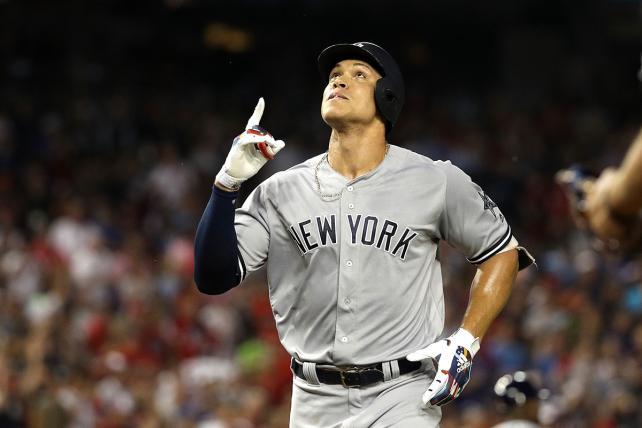 Aaron Judge of the New York Yankees and the American League celebrates after hitting a solo home run in the second inning during the 89th MLB All-Star Game.
Credit: Patrick Smith/Getty Images

According to Nielsen live-plus-same-day data, Fox's coverage of the Midsummer Classic averaged just 8.69 million viewers and a 5.2 household rating, marking a decline of 6 percent and 5 percent, respectively, compared to last year's broadcast (9.28 million viewers, 5.5 rating). Despite offering fans a highly entertaining sluggers' clinic—in a game that would be decided in extra innings, American League and National League hitters walloped a staggering 10 home runs, crushing the previous record of six—last night's impromptu dinger derby now ranks as the least-watched, lowest-rated All-Star Game in the 52 years in which Nielsen has been keeping track of that sort of thing.

Baseball's celebration of its best and brightest delivered a 2.1 rating in Fox's target demo, which worked out to 2.76 million adults 18to 49. Two-thirds of those viewers (1.83 million) were males. By way of comparison, Fox's slate of unscripted summer series like "MasterChef," "Beat Shazam" and "So You Think You Can Dance" is currently averaging a 0.7 rating among that same set of advertiser-coveted viewers, or a little north of 900,000 adults 18 to 49.

Before last night's broadcast, the low-water mark for an All-Star Game was the 8.71 million viewers/5.4 household rating/2.2 demo Fox eked out in 2016.

While baseball's July showcase has always enjoyed bragging rights as the most popular All-Star Game in sports, the most recent Nielsen data suggests that the MLB has finally dropped back with the rest of the pack. Fox's coverage of Tuesday night's game barely topped the ESPN/ABC simulcast of January's NFL Pro Bowl, which drew 8.6 million viewers, although the football expo ran away with top honors in the household ratings race (5.3) while edging Turner's telecast of the NBA All-Star Game in the demo by one-tenth of a point (3.4 versus 3.3).

In keeping with the ongoing greying of baseball's fan base and the TV audience as a whole, Fox's All-Star Game audience was once again a bit long in the tooth. The median age of the viewers who watched Tuesday night's spectacle was 56.4 years, and while that was effectively unchanged compared to last year's stats, the audience was nearly two years older than the 2016 crowd (54.6 years).

Per iSpot.tv estimates, among the most visible advertisers that bought time in Fox's presentation of the 2018 All-Star Game were official MLB sponsors MasterCard, Geico, Chevrolet and Budweiser. Other high-profile advertisers included Verizon, Exxon Mobil, Boost Mobile and Ford.