NBA playoffs ratings slide as LeBron sits out the postseason 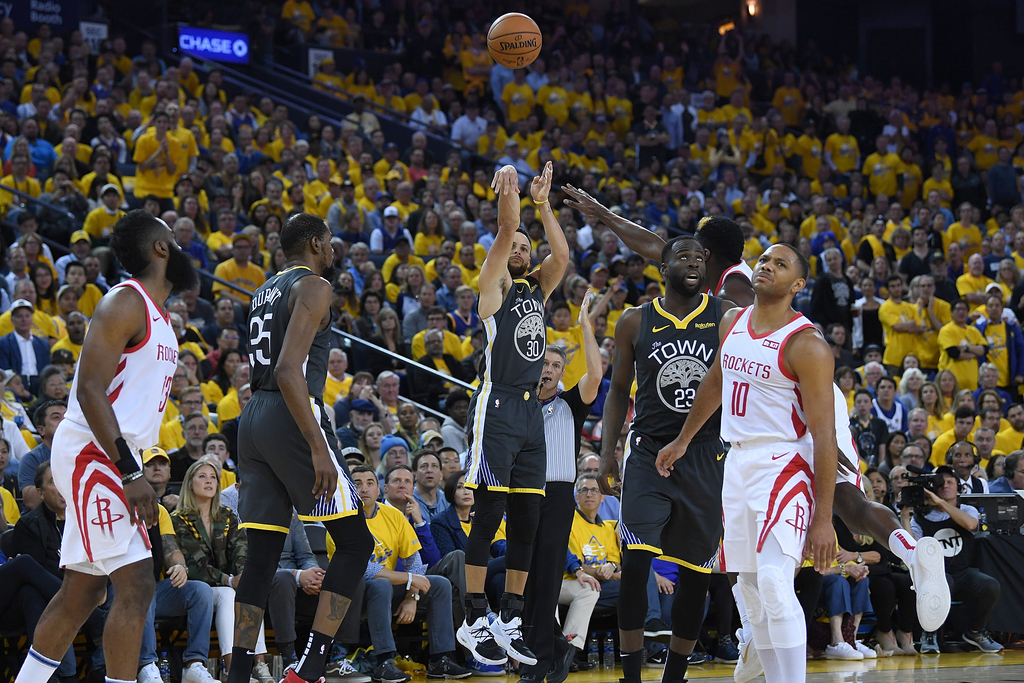 LeBron James’ tumultuous first tour of duty with the Los Angeles Lakers cast a long shadow over the NBA’s regular-season ratings results, and the absence of the league’s most singular talent appears to be having an impact on the playoff deliveries as well.

Through the first 48 games of the NBA postseason, playoff telecasts are averaging 2.92 million viewers and a 1.9 household rating, which marks a 14 percent decline compared to the year-ago draw of 3.4 million viewers and a 2.2 rating. While teams repping major media markets such as New York, L.A., Philadelphia, San Francisco and Boston have helped keep this year’s numbers relatively healthy, James’ first postseason no-show since 2005 may have discouraged more casual hoops fans from tuning in.

While the hitch in the playoff ratings was prefigured by a regular-season drop—overall NBA viewership was down 8 percent year-over-year—it’s likely that LeBron’s move to the Staples Center was responsible for at least some of the erosion. James and the Cleveland Cavaliers regularly kicked off the NBA’s national doubleheaders on TNT and ESPN, which in turn served to boost the deliveries for the late games on the West Coast. That lead-in dynamic was scuttled when James joined the Lakers, which this season appeared in a staggering 29 late doubleheader games and only seven early contests.

Also not helping matters: The Lakers stunk something fierce, and found themselves eliminated from playoff contention on March 23, or three weeks before the playoffs tipped off in Philly. As it happened, James had to sit out a fair amount of the team’s national appearances; hampered by a groin injury, James this season would play in just 55 games, logging the least amount of court time in his 16-year career.

If it’s unfair to pin the entirety of the NBA’s recent ratings skid on a single athlete, salvation may yet rest on the shoulders of five other players. The defending champion Golden State Warriors, whose four-year rivalry with James and the Cavs helped generate massive ratings and ad sales revenues, have done their part to keep fans glued to the set. While the turnout for their six-game first-round set against the Clippers was flat versus last year’s San Antonio series, the Warriors have caught fire in the conference semifinals.

Golden State’s 104-100 opener against the Houston Rockets Sunday scared up 7.26 million viewers and a 4.5 rating on ABC, making it the most-watched second-round playoff game in seven years. On Tuesday night, the two Western Conference foes racked up 6.07 million viewers and a 3.8 rating on TNT, breaking a three-year cable record. Through those first two games, ratings for the Warriors-Rockets series is up 31 percent versus both teams’ analogous second-round deliveries in 2018 (Golden State last year squared off with New Orleans in the conference semis, while Houston faced Utah.)

While there’s a lot of basketball left to be played—in the unlikely event each of the remaining playoff series goes the distance, another 41 games will have to be played before the NBA crowns a champion—the best-case scenario for the league and the Walt Disney Co. is for Golden State to earn the chance to go for a three-peat. As ABC and ESPN are carrying this year’s Western Conference Finals, the Mouse House quite naturally would welcome any chain of events that puts Golden State in position to meet Denver or Portland later this month. And the longer the series, the better. Sweeps can take an awful lot of potential ad sales revenue off the table, and the losses really start to mount as the postseason progresses.

Since the playoffs began in mid-April, the biggest spenders have included representatives of the beer, insurance, wireless, quick-service restaurants and auto categories. Per iSpot.tv data, Corona has been particularly active, especially during ABC’s broadcasts, while official NBA wireless sponsor (and TNT parent company) AT&T also has been particularly visible throughout the playoffs. Other top backers include Progressive, Geico, Kia, Burger King and American Express.

While the studios tend to heavy-up on NBA buys later in the playoffs, Universal Pictures thus far has claimed a good deal of first- and second-round inventory to promote its upcoming titles “Fast & Furious Presents: Hobbs & Shaw,” “The Secret Life of Pets 2” and “A Dog’s Journey.” Movie trailers will become a more common, in-game diversion once the summer blockbuster schedule starts heating up.

As has been the case for the last 16 seasons, ABC will broadcast the NBA Finals. There’s big money on the line; should the championship series require a sixth or, better still, a seventh game, the ad inventory can generate north of a quarter-billion-dollars in revenue. And as much as the specter of a yet another Boston title run is a shrieking nightmare for those of us who make a habit of pronouncing our terminal Rs and don’t exclusively refer to a certain coffee chain as “Dunks” or “Dunkies,” ABC couldn’t ask for a better Finals matchup than Celtics-Warriors.

Buyers say that advance units sold in the first four games of the NBA Finals are fetching as much as $500,000 for each 30-second increment. Per Kantar Media estimates, ABC booked $303 million in sales during the last championship series to go all seven games (2016), which is just about what ABC, ESPN and TNT have taken in during the first 19 days of this year’s playoffs.