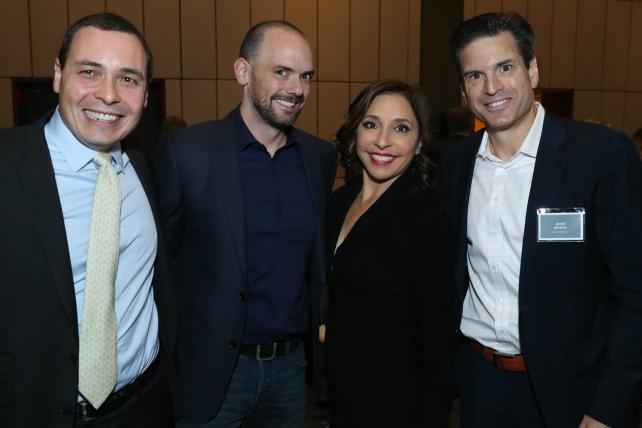 If there's been a theme in the TV industry this year, it's been unifying to face threats such as digital competitors and lost audiences. That continued Tuesday morning with an unusual meeting that opened the tent to include the same digital rivals that are giving TV so much trouble.

For three hours at the Pool restaurant in Manhattan, a space previously occupied by the Four Seasons, NBC Universal convened some of the top leaders in media, marketing and digital, including Irwin Gottlieb, chairman of WPP's powerful GroupM ad buying network; David Levy, president of Turner, which owns cable networks including TBS and CNN; and Carolyn Everson, VP of global marketing solutions at Facebook. Representatives of Google, Twitter and Snap were also on-hand, as well as executives from big TV advertisers such as McDonald's, Target and Unilever.

"We have a problem," Linda Yaccarino, chairman of advertising sales and client partnerships at NBCU said during her opening remarks. "You know it, I know it, we all know it."

"We cannot leave today without a meaningful plan for action and follow-up," she added.

But that might have been a tall ask for one morning, even if it included a call to fill out note cards with ideas and leave them behind for consideration.

The morning also included panel discussions. Brian Lesser, who recently joined AT&T to lead the new advertising and analytics unit, debated Tara Walpert Levy, VP of agency and media solutions at Google, about why marketers really buy YouTube. (He says it's for its predictability and measurement capabilities, not because it houses quality content.)

But the talks didn't provide fresh takes. Panelists kicked around the dire need to count viewers no matter where or how they watch, and to improve the TV experience as people increasingly turn to platforms that don't carry ads.

These are the same challenges that have been discussed, debated and chewed on at every industry event from Advertising Week to Cannes to the Consumer Electronics Show for the last several years. The big question remains: What now?

"Who knows, we might even reduce commercial loads across the board," she added. Exactly how the company would do that wasn't discussed. Networks already trying to trim commercial minutes have to convince marketers to pay more for the remaining time if they're going to avoid losing revenue.

Several people who attended said afterward that they don't think anything was achieved.

"People sitting on a panel doesn't exactly solve anything," one media buyer says. Others hoped to hear more about solutions and less about familiar problems.

And while it's perhaps foolish to think a solution to complex issues plaguing the industry would come out of one gathering, several executives said the next steps weren't clear.

"It's critical we try to get some momentum coming out of it," a second buyer said.

A handful of executives chose to not fill out the index cards provided, saying it wouldn't achieve anything. Some ducked out early. One TV executive said "it was a complete waste of time."

Yaccarino singled out them out in her opening remarks and said they were important to making any progess. "Together, they're excited to continue the change we start today and report back to all of us," she said. "And it will be up to them—and all of us—to hold each other accountable."