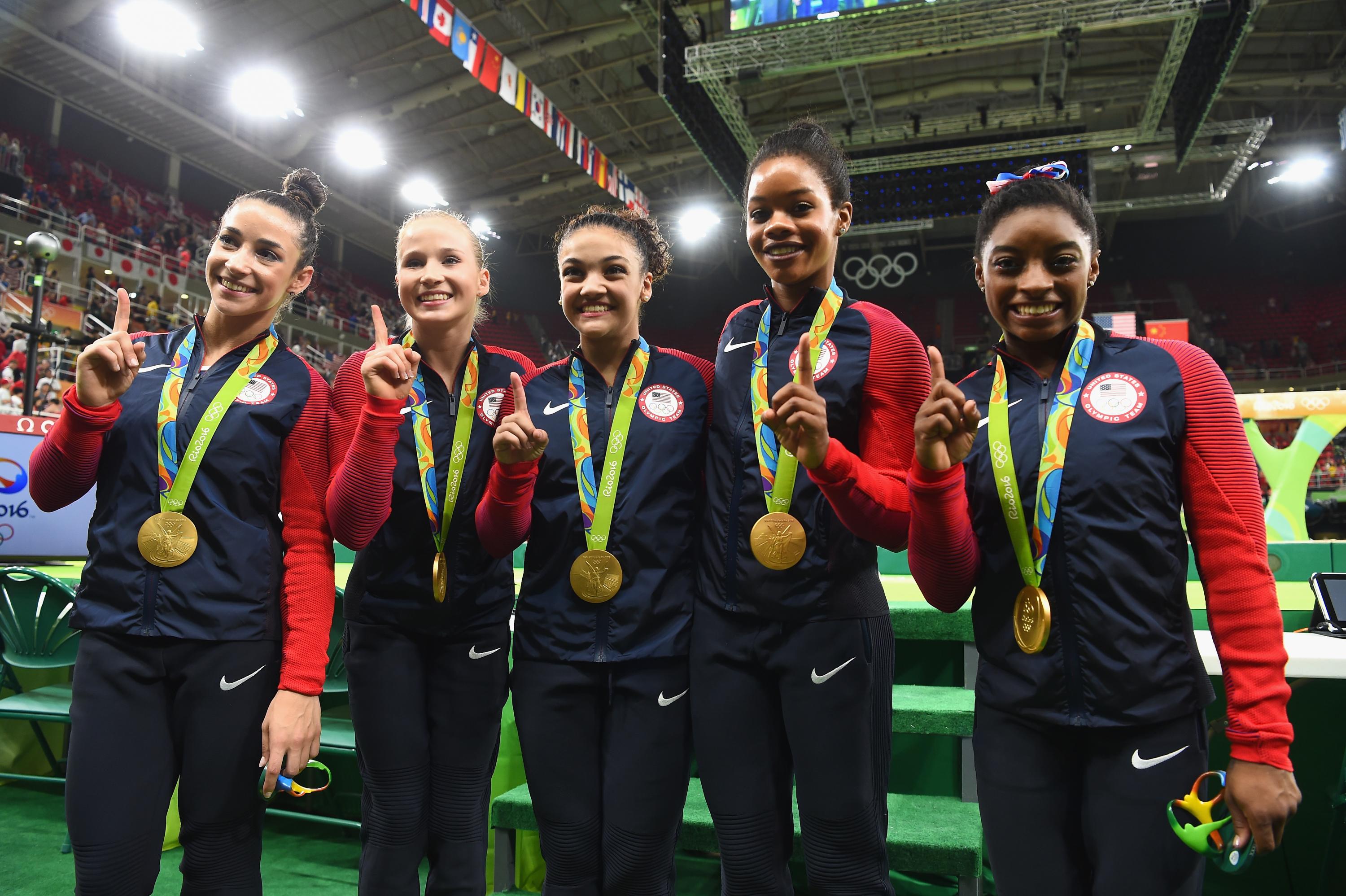 (L to R) Gold medalists Alexandra Raisman, Madison Kocian, Lauren Hernandez, Gabrielle Douglas and Simone Biles of the United States pose for photographs with their medals after the medal ceremony for the Artistic Gymnastics Women's Team on Day 4 of the Rio 2016 Olympic Games at the Rio Olympic Arena on August 9, 2016 in Rio de Janeiro, Brazil.

NBC Universal is partnering with Team USA and the host committee for the 2028 Summer Games in Los Angeles to create a one-stop-shop for any company interested in aligning itself with the Olympics.

For the first time, Team USA sponsorships and U.S. Olympics TV ads will be sold through one entity. The partnership, which runs from 2021-2028 and covers four Olympic and Paralympic games, aims to maximize the money companies pay to be associated with the global event.

Their goal: many billions of dollars. The United States Olympic Committee and LA2028 have set a target of $2.5 billion in corporate deals. NBC’s ad sales over that eight-year period will almost certainly be far higher -- the entertainment division of Comcast Corp. set a Summer Olympics record with $1.2 billion in sales for the 2016 games, then set a Winter Olympics record with $920 million in sales in 2018.

“As audiences become more disparate, it’s never been more important for marketers to have a simple and unified way to reach them,” said Casey Wasserman, founder of Wasserman Media Group and chairman of LA2028. “To be able to do that with the biggest event in the world is unprecedented.”

As part of the partnership, NBC committed to backstopping a portion of LA2028’s $2.5 billion target, according to two people familiar with the deal. That means the host committee has some downside protection if revenue comes in significantly below expectations. Conversely, NBC would see some benefit if sales surpass that goal.

NBC is joining what was already a joint venture of sorts. The International Olympic Committee requires that host committees, in this case LA2028, work with their local national committee to sell sponsorships in the run-up to their games. The idea is to keep the two sides from working against each other. That partnership, called the U.S. Olympic & Paralympic Properties, was formed last year, with Legends, the hospitality company controlled by the New York Yankees and Dallas Cowboys, as its sales agent.

NBC’s advertising inventory for TV and for digital will now be a part of the bigger group. Under the new structure, for example, companies looking to buy advertising at NBC can also negotiate use of Olympics trademarks and logos, including the interlocking rings, which are controlled by the USOC and LA2028.

NBC will take the lead in the venture, in partnership with the USOC, LA2028 and Wasserman’s marketing company. Legends will remain a part of the process.

“We’re coming together and really in an incremental and exponential way, bolstering the resources of what Casey’s company brings to the table and what NBC brings to the table,” said Linda Yaccarino, chairman of advertising and partnerships at NBC Universal.

Team USA’s current portfolio of more than 20 domestic partners -- which includes Kellogg Co. and United Airlines -- expires after the 2020 Summer Games in Tokyo. Though some retain the right to first negotiation, the timing creates a blank slate for the new venture.

That final event is the crown jewel of the set, the first summer games to be held in the U.S. since Atlanta hosted in 1996.