Analysts say the decrease in ad revenue was ‘a negative surprise,’ and the company's stock suffered its worst defeat since 2012
READ THIS NEXT
Snapchat strikes deal to sell local ads through newspaper giant Gannett 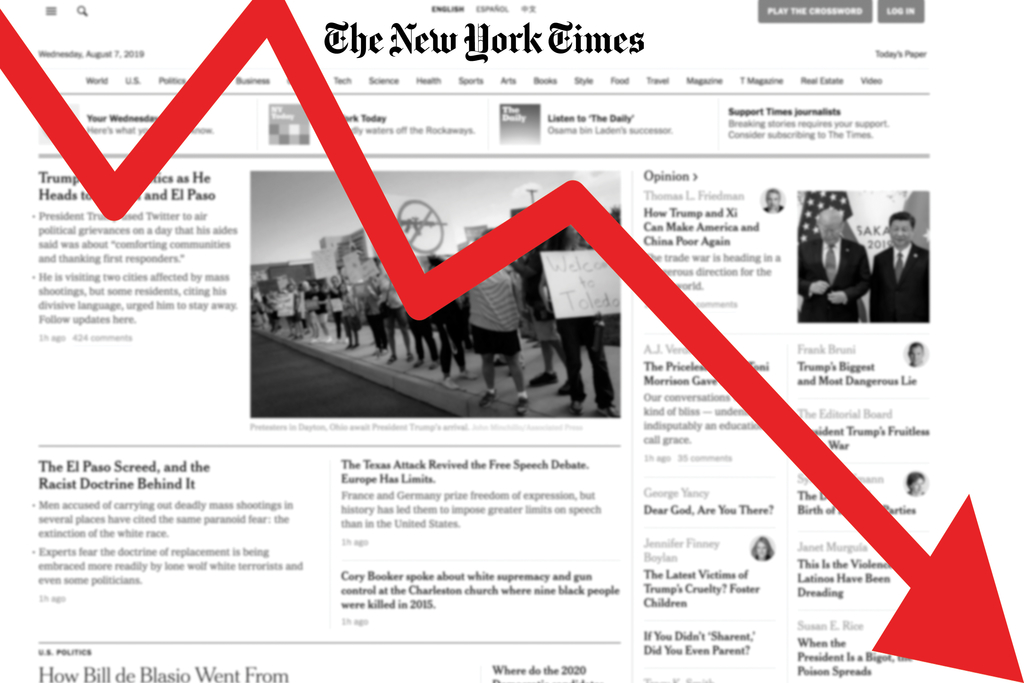 The New York Times is having a week from hell, and it’s only Wednesday.

After the publisher drew flak for a poorly worded headline earlier this week and suffered a legal setback against Sarah Palin on Tuesday, it warned that advertising revenue would decline sharply this quarter.

The outlook sent New York Times Co. shares down 20 percent Wednesday—their worst intraday plunge in almost seven years—and cast a shadow on what had been an upbeat year for the Gray Lady. The stock was up 60 percent in 2019 through Tuesday, fueled by signs that the 168-year-old publisher is successfully pivoting to the digital age.

The Times expects ad revenue to decrease by a percentage in the high-single digits in the third quarter—“a negative surprise,” according to Evercore ISI. It rattled shareholders, who otherwise might have focused on the company’s strong growth in digital subscribers.

The stock rout was another headache in a week full of them. On Monday, presidential candidate Beto O’Rourke slammed the newspaper for running the print headline “Trump Urges Unity Vs. Racism,” which he and other critics said mischaracterized the story in favor of the president. Joan Walsh, a CNN contributor and correspondent for the Nation, said she was canceling her Times subscription and helped fuel a backlash against the paper on social media.

New York Times Executive Editor Dean Baquet acknowledged to the Daily Beast that it was a “bad headline,” but noted that it was quickly changed.

Palin suit
On Tuesday, the Times learned that it must face a defamation lawsuit by Palin, the former Alaska governor, over an editorial that linked her to the shooting of Arizona lawmaker Gabrielle Giffords.

The 21-page decision, which reinstated a lawsuit dismissed by a lower-court judge, was largely procedural, with the New York-based appeals court saying Palin’s complaint “plausibly states a claim for defamation.” But it now allows her to obtain documents from the media company and question editorial page editor James Bennet.

“We are disappointed in the decision and intend to continue to defend the action vigorously,” Times spokeswoman Danielle Rhoades Ha said earlier this week.

On Wednesday, New York Times Chief Executive Officer Mark Thompson blamed the ad woes on “lumpiness”—its ad orders come in clumps, rather than a steady stream. The company also is up against tough comparisons, since ad sales were strong in the year-earlier period, he said.

But he struck an upbeat tone, noting that the company was pursuing “mult-imonth, and in some cases multiyear, partnerships with some of the world’s leading brands.”

In recent months, the company has landed “some of the largest deals in our history as a company, deals from which we will see much of the benefit in 2020,” he said. “These partnerships are distinctive and difficult to replicate and give us real pricing power. And that’s why we’re pursuing them so energetically.”