NFL Playoffs Preview: Advertisers Are Going to Miss the Cowboys and the Packers | Ad Age
Skip to main content

NFL Playoffs Preview: Advertisers Are Going to Miss the Cowboys and the Packers 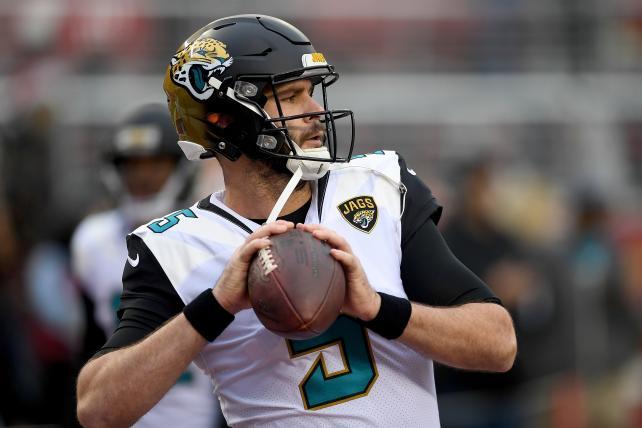 The Jaguars' Blake Bortles warms up before a game against the 49ers last month.
Credit: Thearon W. Henderson/Getty Images

Surrounded by a cast of would-be ratings detectives, the NFL this year functioned as the corpse in an English murder mystery—only in this case the body at the center of the conversation remains in rude good health and the only Brit in the mix (or at least the only one that comes to mind) is Eagles running back Jay Ajayi. Despite enduring a 9 percent seasonal drop in viewership, pro football in 2017 continues to leave pretty much every other flavor of TV programming in the dust—which goes a long way toward explaining why the NFL's network partners still managed to eke out slight year-over-year increases in revenue from in-game ads.

Unfortunately for broadcasters and the advertisers who are lining up to buy time in the NFL playoffs, the erosion that characterized the last 17 weeks may only accelerate in the postseason.

For starters, three of the top five highest-rated NFL franchises—Dallas, Green Bay and Seattle—will be watching the playoffs from home, thereby eliminating what would have been a rematch of last season's most-watched playoff broadcast. (The heart-stopping Jan. 15 Divisional Round showdown between the Packers and Cowboys on Fox last year averaged a towering 48.5 million viewers and a 26.1 household rating, making it the year's second-biggest draw, behind only the Super Bowl.)

According to Nielsen live-plus-same-day ratings, the average national delivery for the 12 teams that advanced to the playoffs was 13.6 million viewers, a 24 percent decline from 17.9 million viewers a year earlier and a 30 percent drop versus 19.4 million in 2015. Perhaps some of those year-over-year losses can be chalked up to a relative lack of star power under center. Two years ago, playoff viewers could look forward to witnessing the virtuosity of Peyton Manning and Aaron Rodgers; this time around we're looking down the barrel of a Tyrod Taylor-Blake Bortles showdown.

Also not likely to help draw a crowd is the presence of three of the league's least-exposed teams in Tennessee, Buffalo and Jacksonville. The Titans drew 10.9 million viewers and a 6.7 household rating in their two national windows, or roughly half the average turnout for the No. 1-ranked Cowboys, while the Bills in their single coast-to-coast telecast managed to out-draw only the lowly, winless Cleveland Browns. AFC broadcaster CBS can draw some solace from the odds that neither team is likely to impact a string of playoff games; Vegas bookmakers list the Titans and Bills as 100-to-1 long shots to win the Super Bowl.

In a meeting of two of the lowest-rated teams in recent memory, Buffalo and the Jacksonville Jaguars will square off in the first Sunday afternoon Wild Card window. Despite posting a laudable 10-6 record and winning the AFC South title, the Jags effectively were relegated to obscurity this season, as the NFL deemed their Sept. 24 meeting with Baltimore in London a proper national TV window and didn't give them another one. This despite the fact that the game only aired in the two clubs' home markets, which together serve some 1.8 million TV homes, or about 1.6 percent of the national viewership pool. (Verizon coughed up north of $20 million to stream the game, which kicked off at 9:30 a.m. on the East Coast and ended with the Jags piling up a 37-point advantage over the Ravens. Neither Verizon nor the NFL disclosed how many people tuned in for the stream, perhaps telling you all you need to know about how that particular experiment was received.)

For what it's worth, Vegas has laid down 20-to-1 odds on Jacksonville hoisting the Lombardi Trophy on Feb. 4. Their reward for beating the underdog Bills on Sunday afternoon: A trip to Pittsburgh to face the high-octane 13-3 Steelers, whom the Jags whupped by a 30-9 margin back in Week 5.

Of course, this season's somewhat unfamiliar playoff roster isn't exclusively populated by the unloved and underexposed. Pittsburgh and New England would seem all but fated to meet again in the Jan. 21 AFC Championship Game; discounting an unlikely blowout either way, the reprise should pay off nicely for CBS. On Sunday, Dec. 17, the Pats and Steelers delivered the season's biggest NFL audience, drawing 26.9 million viewers and a 15.2 household rating in CBS's late-national window.

Incidentally, that Pats-Steelers nail-biter was the only broadcast this season to break the 15.0 barrier. Last season, three games on Fox topped the 15.0 mark, while no fewer than 13 games surpassed that ratings milepost in 2015. While NFL games still put up disproportionately huge ratings compared to most general-entertainment programming, the deliveries simply aren't as massive as they were just a few years ago.

Despite the absence of Dallas and the ever-popular Packers, Fox has some very heavy hitters in its NFC stable. Representing the nation's No. 2 media market with a base of some 5.5 million TV households, the surprisingly resurgent Los Angeles Rams are the NFL's seventh-biggest draw, edging out two big-market franchises in playoff-bound Philadelphia and Atlanta. No. 9 New Orleans, a 5-to-1 Super Bowl favorite, represents the 50th largest DMA, but unlike other sports where smaller markets almost always ensure a limited TV turnout, the NFL plays by its own set of rules. For example, with fewer than 440,000 TV homes in the mix, Green Bay-Appleton is only the 68th-largest media market, and yet the Packers finished the season ranked third among all NFL teams in the national TV ratings. More relevant to this particular postseason, the Pittsburgh market can lay claim to just 1 percent of the country's TV homes, and yet the Steelers are such an enduring national brand that they close out nearly every season in the Nielsen top five.

For CBS, the best-case scenario for its final broadcast of the NFL season lies in another all-or-nothing battle between New England and Pittsburgh. Last season, the two teams scared up 48 million viewers and a 24.4 household rating as they battled for the right to represent the AFC in Super Bowl LI. Before that rather anticlimactic rout, the last time the two teams met in the conference championship game, back in 2005, CBS averaged 44.3 million viewers and a 25.8 rating. And while those numbers don't quite rise to the 50 million-plus viewers who regularly tuned in for the classic Peyton Manning-Tom Brady battles of a few years back, Manning hung up his cleats in 2016. Dance with the one what brung ya.

However things shake out—on paper, Fox's two Wild Card games (Falcons-Rams, Panthers-Saints) seem promising, and it's hard to overstate how freakishly entertaining it is to watch the Minnesota Vikings on both sides of the ball—the absence of Dallas and Green Bay likely will have a dilutive impact on the NFC playoff ratings. But even those fan favorites weren't immune to the vicissitudes of the NFL ratings squeeze. While the Cowboys closed out the season averaging 21.6 million viewers and an 11.9 household rating in their 12 national TV windows, that marked an 11 percent drop compared to the year-ago 24.4 million viewers and 13.4 household rating. The third-ranked Packers' ratings fell 9 percent.

While No. 5 Pittsburgh saw its national TV ratings drop 15 percent, a return to winning ways helped make the Rams and Saints far bigger draws in 2017. L.A. this season saw its national ratings jump 37 percent, while New Orleans' Nielsen performance improved 54 percent year-over-year. Those results are apparent at a glance at last season's ratings chart; after finishing 22nd overall in the 2016 national ratings race, the Rams rebounded to No. 7, while the Saints went from the NFL's seventh lowest-rated franchise to the ninth-biggest draw.

Again, even if advertisers should expect to reach fewer eyeballs during this playoff cycle, the overall ratings will still eclipse pretty much every other delivery system on the tube, short of the Super Bowl. Last season's least-watched, lowest-rated postseason game, a lopsided AFC Wild Card skirmish between Oakland and Houston, averaged 25.1 million viewers and a 14.4 household rating, making it TV's 21st-largest draw of 2017. By comparison, the year's biggest scripted series results, which were chalked up by the Season 11 premiere of CBS's "The Big Bang Theory" (17.7 million live-same-day viewers and a 10.5 household rating), were good for 58th place.