NFL ratings might take a hit as veteran quarterbacks get sidelined

The NFL: no country for old men?
READ THIS NEXT
Beyond MyPillow: the other biggest brand advertisers on Fox News revealed 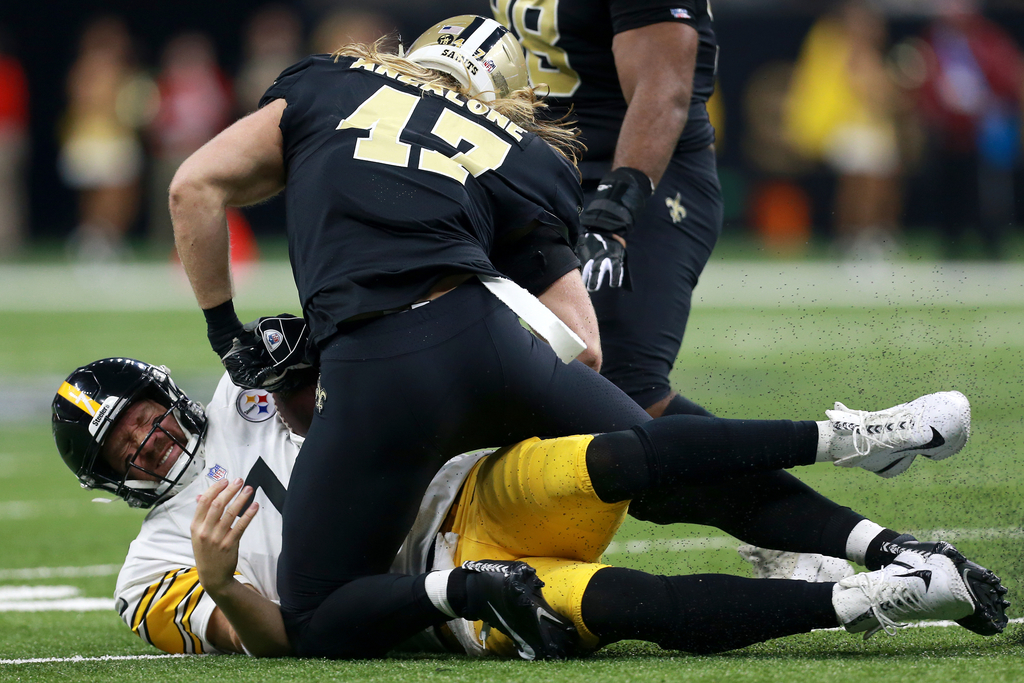 A rough weekend for three of the NFL’s most celebrated old-school quarterbacks may have long-term implications for the league’s TV partners, as the loss of Ben Roethlisberger, Drew Brees and Eli Manning could cause a shakeup in the Nielsen ratings. No team poses more of a risk than the Pittsburgh Steelers.

By virtue of the Steelers’ outsized contribution to the weekly NFL deliveries, Roethlisberger’s season-ending injury is likely to have the most meaningful impact on Fox, CBS, NBC and ESPN. Late in the second quarter in Pittsburgh’s home opener against Seattle, the 37-year-old quarterback shook out his arm in distress after firing what appeared to be a routine incomplete pass. The sight of Roethlisberger clutching his right elbow like Rodney Dangerfield trying to finesse his way out of a golf bet was the stuff of nightmares for Steelers fans and the networks that cash in on the team’s popularity.

Pittsburgh has six national TV windows remaining on its schedule, and it will have to suit up for each of them with the largely untested backup Mason Rudolph under center. A third-round draft pick in 2018, Rudolph looked effective against the Seahawks—he connected on 12 of 19 passes for 112 yards with two touchdowns and an interception—but unless he starts lighting up the scoreboard like Big Ben in his prime, the Steelers are not going to be a reliable ratings draw.

The amount of gross ratings points in play is not insignificant. Last season, Pittsburgh was the NFL’s fifth most-watched franchise, averaging 19.2 million viewers and an 11.2 household rating. That matched their 2017 ranking but marked a bit of a decline compared to the 2016 season, when they trailed only Dallas as the league’s top TV attraction.

In terms of sheer exposure, Fox and ESPN are most at risk of suffering a Steelers hangover. For Fox, the magnitude of Roethlisberger’s injury will be fully known in November, when the broadcaster will carry two Pittsburgh games in the space of six days. On Sunday, Nov. 10, the Steelers host the Los Angeles Rams in Fox’s national afternoon window before traveling to Cleveland on the 15th to face AFC North rivals the Browns on “Thursday Night Football.”

Then again, the ratings impact might not be as bad as you might expect, at least for some networks. Whatever diminishing returns Fox sees during that one week in November will be more than offset by the huge numbers it expects to serve up with the bulk of its NFL schedule. If the Oct. 6 battle between the Cowboys and Green Bay Packers wasn’t promising enough, there’s always the hotly anticipated Dallas-New England game on Nov. 24. Buyers have indicated that this rare meeting between America’s Team and the six-time Super Bowl champs is the priciest regular-season game on the calendar, one that is almost certain to scare up the year’s largest audience.

Two additional Cowboys appearances in the “America’s Game of the Week” window and a pair of games featuring the Chicago Bears leaves Fox feeling fairly confident that it will weather whatever localized squalls it experiences during its upcoming Steelers blitz. The Bears last season were the second most-watched team in the national windows, slotting in the space behind perennial No. 1 Dallas.

ESPN may find itself inoculated from any lingering effects from its own exposure to the Steelers by virtue of the fact that its two Pittsburgh games were unlikely to really move the needle in the first place. The Steelers host the hapless Cincinnati Bengals on the Sept. 30 installment of “Monday Night Football,” a skirmish that will precede a not-entirely-rife-with-potential Dolphins-Steelers clash on Oct. 28.

As is the case with Cincinnati, Miami is a fairly hapless franchise, one that the NFL regularly leaves out of the spotlight. Along with the Bengals and Dolphins, the other teams to be granted the bare minimum of a single national TV window are the Arizona Cardinals, Tennessee Titans and Buffalo Bills.

Like the Steelers, both the Bengals and Dolphins are 0-2. A loss this weekend for any of these three teams effectively ends any shot at a postseason run; since the NFL adopted the 16-game schedule back in 1978, only 3 percent of all franchises that started a season with a 0-3 record have advanced to the playoffs. (Improbably enough, the Houston Texans managed to pull it off last year, only to lose to the visiting Colts in the Wild Card round.)

Other national Steelers games include an Oct. 13 “Sunday Night Football” appearance against Roethlisberger’s fellow 2004 NFL Draft veteran Philip Rivers and the Los Angeles Chargers, and a Dec. 8 rematch with the Browns on CBS. NBC may choose to flex out the Steelers-Chargers game in favor of a more promising matchup, and while CBS is likely to protect its national Cowboys-Jets pairing, NBC would be wise to try and snap up the regional 1 p.m. ET Eagles-Vikings game from Fox. Barring that, “Sunday Night Football” could very well end up airing as scheduled, as Week 6 doesn’t present a whole bunch of palatable alternatives—unless Titans-Broncos or Skins-Dolphins is your idea of a good time.

Roethlisberger’s wrecked ulnar collateral ligament aside, the networks are also somewhat hampered by Saints quarterback Drew Brees and his thumb injury. The 40-year-old will miss at least six weeks, an interval that includes a road game in Seattle set to air this Sunday in CBS’s first national window, as well as a Sept. 29 “Sunday Night Football” showcase against Dallas. Then there's the benching of the Giants’ Eli Manning. Also a member of the vaunted Class of ’04, Manning has played the last few seasons like a man in the grips of an ether binge; New York will start rookie Daniel Jones on Sunday in Tampa.

If recent events suggest that the NFL is no country for old men (genetic freak/gym rat/weird-diet guy Tom Brady to the contrary), Brees at least should be back in time for the Saints’ big primetime Turkey Day throwdown with the Atlanta Falcons.

And as much as Giants fans of a certain sentimental bent will miss the spectacle of Eli throwing interceptions that laugh in the face of aeronautics and human understanding, Big Blue only have three upcoming national windows lined up. By virtue of the fact that all three coast-to-coast games feature ratings standouts (Cowboys, Patriots, Eagles), Manning’s departure is expected to play only a superficial role in the TV turnout. Besides, the only Giants player worth watching these days is Saquon Barkley, and he’s as healthy as a horse—knock wood.

While Sunday’s gerontological culling at the QB position may serve as an unwelcome reminder that the ravages of age are pitiless and inescapable, the rise of young superstars like Patrick Mahomes, Dak Prescott and Lamar Jackson is evidence that there’s no shortage of strong pallbearers to march us all to our eternal rest. Or, to close out on a somewhat less dismal note, the springtide of spring-loaded arms should keep the networks and their advertisers giddy throughout the season.