More Than 30 Companies Will Present This Year
READ THIS NEXT
NewFronts Now: Social platforms highlight positivity on day 4 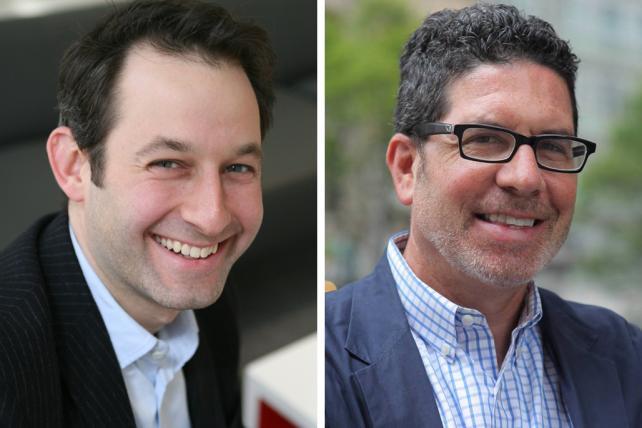 Since the then-Digitas employees John McCarus and Jordan Bitterman put on the first Digital Content NewFront event in 2007, a lot has changed about the annual media industry event, but a lot has stayed the same, too.

Ad Age spoke with Mr. McCarus, now chief strategy officer for Federated Media, and Mr. Bitterman, most recently of Mindshare, about how the NewFronts has evolved and what they expect to be top-of-mind for the companies presenting and advertisers attending this year. "Where is the content marketing piece of this?" Mr. McCarus asked. "There needs to be a content marketing tread in the NewFronts, too. I think everyone's spooked by all of the dollars being spent on big video. So if you can't play that game, to me, you should be trying to play another game."

This interview has been edited for length and clarity.

Ad Age: Are you surprised by how much the event has grown over the last eight years? Has it gotten bigger than you both expected when you started it?

Jordan Bitterman: It was a very different time in 2008. At the time, we just saw an opportunity to start a dialogue with our clients about what we thought was the coming importance of digital video, digital video content. And you know, in fact we even had to pick when in the year we even wanted to do this thing. We picked this time of year so that it would be just before the broadcast upfronts and would help create attention and purposely call attention to this area.

The largest focus of it at the beginning was really about just the creation of video content. Today, it's so different. We certainly talk about creation, but we're also talking about distribution, and we're talking about the ad opportunity that surrounds video content. But back then there was no ad opportunity around it. There was no business. It was counted in the maybe low hundreds of millions of dollars. And obviously it's become much bigger than that.

John McCarus: The thing was, for us, we were also feeling like there was a lot of really creative people that had no money, no support, no means for distribution. YouTube was just getting underway in 2007. And so I think there was a feeling that, you know what, brands have a chance to step in and really fund this new generation of content creation and distribution and viewership. And they're really needed, because there really was no established distribution-funding system.

And then the other thing is the writer's strike. And so when the writer's strike arrived, then all of these television writers and film writers flooded to the web to start to create digital content, and that kind of accelerated the conversation. Following the writer's strike, you started to get a lot of distributors also starting to emerge.

Ad Age: Have the topics and issued discussed changed much over the years, or has the core of the event remained the same?

Mr. McCarus: First of all, it's a much higher-stakes game. There's more money, there's more competition, there's more focus. And the players have shifted. So, Netflix, who doesn't even accept advertising, may be the reigning champion in digital video creation and distribution, and they're not even going to be at the event. Facebook is about to become in that top 3 perhaps. They're not at NewFronts. You've got Hulu.

I think along the way the portals, which we all had big hopes for, have had their own struggles. Getting back to the issue of audience, for me, it's understanding the importance of audience, and how at the end of the day that is what you really have as your currency. And now you have creator-distributors who are in front of and behind the camera who are building empires. Those are the people that I think we need to be betting on.

Ad Age: There has been a renewed discussion about the value of digital content and the business of digital publishing, pegged to news about BuzzFeed's financials and a pivot at Mashable. I wonder how that will factor into this year's presentations.

Mr. Bitterman: I think that actually is exactly the question. They aren't new questions. I think they're old questions that just need to be constantly reinterpreted, and they get reinterpreted based on the plumbing that exists in the industry. The plumbing is the distribution channels, measurement, who the creators are. But scale, scale is an issue we talked about way back when.

Mr. McCarus: Everyone says that there is a sea of unlimited inventory in digital, and that's always been a problem, because it made it hard to value -- because there's not been any scarcity. And that was the original complaint about the NewFronts, that, if you want to have an upfront-like marketplace, you have to have scarcity. That's what television breeds on. And that's what made the upfronts an established marketplace, is the fact that there was limited inventory, and then all you did was talk about price.

Ad Age: These days, there seem to be no shortage of events and conferences focused on the future of digital media, where as that probably wasn't the case back when the NewFronts began. There seem to be a lot of opportunities to have that discussion ...

Mr. McCarus: Yeah, but when you have advertisers with their wallets, the debates are much more tangible. "What am I going to buy?" Not, "Where do we think this is going?"

Ad Age: We seem to be seeing more collaborations across digital and broadcast companies, such as a recently announced advertising partnership between NBCUniversal and Vox Media ...

Mr. McCarus: That's been happening. To me, that in and of itself isn't a news item. However, now, what I see, like last year, for the first time, the NewFronts outgunned the upfronts in terms of share-of-voice in market. And so I really think that the question now, which we begged five years ago, was: Will the upfront process fold into the NewFronts? Because as it starts to get, as convergence really accelerates now, the NewFronts are poised to really drive the conversation.

Ad Age: So you think we're getting to the point where the two events could be merged?

Mr. McCarus: I really think it's worth asking. Because obviously the television networks are now, where they were before making distribution partnerships -- you know, ABC and Yahoo, that was four years ago -- now it's by virtue of the network saying, "Hey, we actually can't figure this out ourselves. We're going to have to actually buy something to stay in the game. We're going to put a stake in BuzzFeed. We're going to put a stake in Vox." To me that's a different statement than was being made two years ago.

Mr. Bitterman: So I don't think it will necessarily be one of these situations where the NewFronts and the upfronts merge artificially -- like, there's a merger of them -- but organically it's already starting to happen. You're buying yourself into each of these different areas, or you're allowing yourself to be bought into each area. And that starts to organically bring them together.