New TV Show Aims To Keep Chatter -- and Social Revenue -- Under Its Own Umbrella
READ THIS NEXT
Beyond MyPillow: the other biggest brand advertisers on Fox News revealed

When Ricki Lake returns to the airwaves Sept. 10 after an eight-year-absence, her TV show won't be the only thing being updated. The syndicated talk program will also try to rework the way daytime programmers keep up with viewers by launching its own social network to draw in fans, help them create "meet-ups" and solicit their videos and votes. 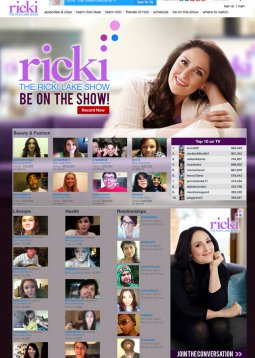 Ricki Lake's new show will try to get viewers talking in digital media -- partly on its own site.

"One of the things that excites me most about my new show is that it's truly a social experience," said Ms. Lake, in a statement sent by email. "This is the first time that viewers will be able to interact with a show across all platforms in real-time, by uploading videos, voting, commenting and sharing across their social networks. Never before have audiences been able to participate in a show to this degree from their living rooms."

Stephen Brown, senior VP for programming and development at News Corp.'s Twentieth Television, the backer of the program, said the effort has to be tried when viewers have so many other distractions between the time a daily talk show goes off the air and when it returns 24 hours later. "It's incumbent upon us as broadcasters to reach out and try something different and try to engage our audience in a different way," he said. "If we don't, we will continue to see a failure and that 's not an option."

Consider Ms. Lake's stab at harnessing social media an effort by TV to capture some of the power that is dominated by Facebook, Twitter and YouTube. The boob-tube bunch has struggled to monetize its presence in social venues that are operated by non-TV companies -- even as those social venues benefit from people talking about TV products.

"It's the production companies, ultimately, who own the rights to the content and produce the show and clients it to the networks," said Mike McGraw, a managing partner at Big Fuel, a Publicis Groupe -owned unit that specializes in social-media advertising and is working to secure ad deals for the new Ricki Lake extension. "But the networks are not in control of the social properties for the show."

Twentieth is aiming to rewrite that formula. To build the capacity for interacting with viewers, it enlisted a small company called YouToo that develops software for just this sort of ability. Viewers who take part can send video in response to topics, get notified if producers select something they contribute to be on TV, and use the network to send alerts to others if the show accepts something they offer. Producers also anticipate using YouToo to solicit other kinds of feedback and to create local groups of viewers aligned along the same interest, such as weight loss, Mr. Brown said.

Daytime programming may be in need of such intriguing add-ons. It's no secret that daytime TV on broadcast networks has been severely crimped in recent years, thanks in part to big shifts in demographics. Once an obvious entertainment choice for millions of women who stayed at home, daytime broadcast TV has seen its allure diminish as more families depend on two incomes and as cable and digital media provide alternatives. Soap operas have already begun to fall -- CBS and ABC have canceled some long-running programs in recent years -- and no true leader has emerged among daytime talk shows since Oprah Winfrey ended her program in May of 2011.

YouToo CEO Chris Wyatt said TV executives have been sharing a growing complaint about social media. "'We're pushing all of our viewers to Facebook, YouTube and Twitter," Mr. Wyatt said they tell him, "and while that 's good, there's no return on investment.'"

Mr. Wyatt said the platform will let the network give its show's sponsors more ways to reach out to viewers and fans. Users could encounter "pre-rolls"and "post-rolls," of course, but elements such as polls could also be sponsored, he added. What no one is saying overtly is that being able to offer such program extensions could keep advertiser dollars under the TV show's roof rather than seeing some of that cash migrate elsewhere.

YouToo is talking with other media companies about similar efforts for other shows and may have more deals to announce "over the next several weeks," according to Mr. Wyatt.