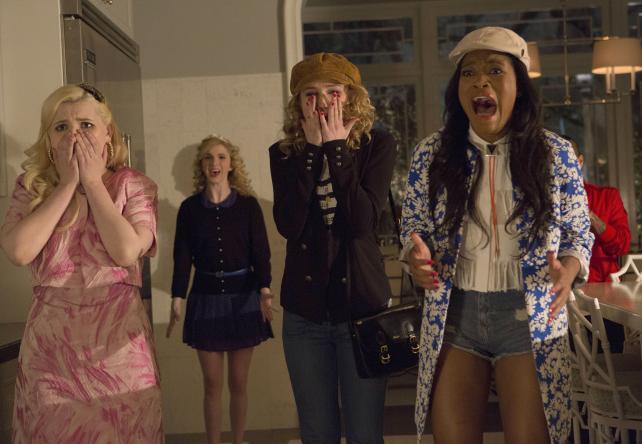 After a disappointing launch that seemed to suggest that young viewers may not have been all that fired up for Fox's "Scream Queens," new insight into delayed viewing of the pilot paints a much more rosy picture.

Setting aside the lift the "Scream Queens" premiere enjoyed thanks to viewers who caught up via their DVRs -- such gains are all but irrelevant to advertisers, as the primary function of time-shifting devices is to enable ad-skipping -- the additional views on VOD and streaming platforms appear to offer a much more legitimate assessment of the show's impact.

When three days of deliveries via VOD, Hulu and the FoxNow app are extracted from the generic live-plus-three-day data, "Scream Queens" improved 53% in the adults 18-49 demo, growing from a 1.7 rating on the premiere date to a 2.6. When broken down by platform, VOD accounted for a 0.42-point lift, while Hulu and FoxNow contributed a 0.44-point bump. That translates to an additional 1.09 million targeted viewers.

While every network pads its stats with DVR-enhanced data, the 0.86-point improvement for "Scream Queens" is significant because the three platforms under consideration do not allow for ad-skipping. Because trick functionality (fast-forwarding) is disabled, viewers can neither zip nor zap through the spots that are baked into the stream; in other words, unlike people who catch up via their DVRs, nearly all of those delayed "Scream Queens" samplers were exposed to the commercials.

If there's no way of telling precisely how the three-day VOD/Hulu/FoxNow uplift will impact the currency data -- the first batch of C3 numbers won't be available until the week of October 12 -- "Scream Queens" could see as much as a 0.5-point improvement from its 1.7 live-plus-same-day demo rating. Nielsen credits commercial views in VOD as long as the spot load is identical to the run of national ads that aired during the original live broadcast; such was the case with the "Scream Queens" VOD experience. The FoxNow deliveries also will get credited toward the final C3 rating.

While Fox was disappointed by the show's live deliveries, the network brass suspected that the premiere would improve significantly upon application of the delayed-viewing data. "'Scream Queens' is the model of the type of show that's going to appeal to the audience that is watching less and less live TV, and watching more on their own terms and on other devices," said Gary Newman, co-chairman/CEO Fox Television Group. "While [last] Wednesday wasn't my favorite day, we did anticipate that there would be substantial increases when we rolled up all the multiplatform viewing."

We've seen this kind of thing before at Fox, which has been very proactive in encouraging viewers to catch up via the most ad-friendly platforms. A VOD push helped the 2014 series premiere of "Gotham" lift its initial demo rating from a 3.3 to 4.2 in C3, this during a week that saw overall broadcast ratings gain just one-tenth of a point upon conversion to the currency. And while the red-hot "Empire" in its first season already averaged a gaudy 5.1 in live-same-day among adults 18-to-49, the coveted demo soared to a 5.9 in C3.

For Mr. Newman and his co-captain Dana Walden, the improved "Scream Queens" stats mark an inflection point of sorts for Fox. "I can say that we'll never be the same again," he said. "We love live-same-day viewers, but as long as people are watching within the relevant time frame and on a platform that discourages ad avoidance, we're happy."

Among the top advertisers that bought time in the premiere were Microsoft, Honda, Samsung Mobile, Subaru, AT&T and Universal Pictures ("Crimson Peak").

"Scream Queens" moves to its regular 9 p.m. time slot Tuesday night (Sept. 29), where it will lead out of the new comedies "Grandfathered" and "The Grinder."