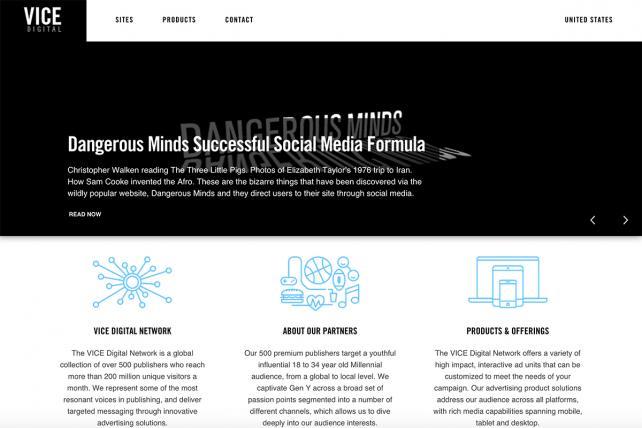 Vice is open about the sites in its digital network, but behind the scenes the competition for sites can be fierce.
Credit: Vice

So, digital advertising networks are back in the news, to borrow a common joke template used by late-night comedians.

In March, Distractify, one of hundreds of publishers who belong to the Vice Digital Network, was singled out in a Variety story for contributing to a drop in traffic for Vice Media in February. Distractify, as part of the network, has assigned its traffic to Vice Media. Vice, in turn, includes Distractify's inventory when selling ads. And, so, because Distractify had a down February, Vice Media did as well, and the nature of these advertising networks came back under scrutiny.

Publishers like Refinery29 and SheKnows Media have long had similar arrangements with smaller publishers. While industry observers have largely focused on how these traffic "rollups" impact the traffic tallies for blue-chip media companies like Vice, less attention has been paid to the benefits for the smaller publishers that sign up for these networks.

The Awl Network is part of the Vice Digital Network, and publisher Michael Macher said the partnership "has been tremendously positive."

"People are kind of making a big deal now of ComScore and the rollups and traffic rollups and things like that, but in my estimation this has always been the way things work, and the people that benefit are the independent publishers," he told Ad Age.

Jane Wladar, who serves as publisher and chief revenue officer for Modern Farmer magazine, said that the Vice Digital Network is "literally an extension of our sales team." Modern Farmer has a separate, five-person team, and Ms. Wladar said the two work together to decide which team should sell what.

Greatist, a health and fitness publisher, is part of Refinery29's ad network, though founder and CEO Derek Flanzraich noted that his company's traffic "is not that much smaller than Refinery's anymore." (Refinery29's owned-and-operated site brought in about 16.2 million U.S. multiplatform unique visitors in February, while Greatist.com had approximately 6.2 million.)

"We found Refinery29 very early, and thought that the alignment was so terrific," he said. "We trust their quality of advertiser in a way that I think very few other brands could possibly compare."

Mr. Flanzraich credited Refinery29 for signing up only a few high-quality, like-minded brands for the network, as opposed to other networks that roll up copious, unrelated brands with pure scale in mind.

"A lot of these companies are including people for traffic's sake," he said.

Ms. Wladar, when asked why Modern Farmer chose Vice's network, said her company gets "many, many offers" from other networks that are interested in them joining. In the end, she said, the decision was made based on principle.

"We admire them for a lot of reasons. We just like working with them. We like what they represent," she said. "We wouldn't just throw our site into any network just to throw it into a network. It has to mean something."

While Modern Farmer takes a more idealistic approach to advertising partnerships, other publishers are more focused on getting the best possible deal.

One publishing executive, who did not want to be named, spoke of a fierce competition --- "a bidding war" -- between digital advertising networks to sign up smaller publishers and get their traffic. Those larger numbers could then be presented to agencies and media buyers who are trying to decide whether publishers have the scale they're looking for.

Describing the appeal to networks of rolling up smaller publications and adding to their numbers, the executive said, "It's like heroin. It's a drug."

There are some risks, however. When a company leaves one network for another, there can be a resulting drop in the first network's traffic. So, the executive said, most of these networks are wary of adding in publishers that are too big, lest they be at risk of showing a noticable drop in traffic. Dose Media left the Vice Digital Network at the end of 2015, but Render Media joined it, and the network's traffic actually increased between December 2015 and January 2016, according to ComScore.

Some have suggested that these networks represent a kind of bait-and-switch, but Mr. Flanzraich said that media buyers "are pretty smart about this stuff" and understand how they work.

Sarah Baehr, exec VP and managing partner of digital investment at Horizon Media, agreed. "For the most part if you want to find out the information and the makeup of a network, it is available," she said. "And I think more and more, that need for transparency is a requirement."

When asked about the quality of some of the sites included in larger networks, Ms. Baehr spoke of an "established level of trust" between digital ad networks and media buyers that governs and ensures the quality of the publishers included. For the "more focused networks," she said, "there is a need to be more vigilant about scrutinizing the sites that they're allowing into the network."

Mr. Flanzraich said Greatist joined Refinery29's advertising network back before the company had its own sales team, when it wanted to focus its energies and resources on growing.

Now that Greatist has a dedicated sales team, Mr. Flanzraich said he has "no doubt" that the company will go independent and leave the Refinery29 nest in the future.

And while a lot has been made of these networks, at least recently, a Vice spokesman cautioned that they're only a small piece of the total piece -- less than 4% of the company's overall revenue. (For context, in May 2015, The New York Times that Vice was "on track" to bring in about $915 million in revenue for the year. A Vice representative on Friday declined to comment on that figure.)