Media Reviews for Media People: 'Losing It With Jillian' and 'Huge'
READ THIS NEXT
TV giants see glimmers of hope for the ad market

Like most Americans, I've spent the first weeks of summer adding to my collection of chins. I've brushed my teeth with BBQ sauce, topped my potato salad with a gentle sprinkling of french fries and accessorized my burger patties with more burger patties. I am not proud of this. 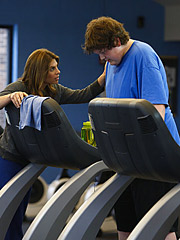 'Losing It With Jiilan'
Credit:
NBC
Before my body inflates to the point where I have to clean those hard-to-reach places with a wet towel on a stick, I plan on getting myself back into fighting shape (defined: restoring a clear visual path between my eyes and my toes). I have two options: Either I can shed the pounds sensibly (exercise/no bread or dessert), or I can shock myself into compliance by viewing the latest round of shriek-fitness programming.

That might be an unfair characterization, actually. When NBC's "The Biggest Loser" debuted several years ago, it sounded like something that should be airing on Fox ("Eight bachelors! 2,650 pounds! Which will they lose first, the weight or the girl? Tune in tonight for the most dramatic Olive Garden ceremony yet!"). Instead, it proved a rare oasis of kindness and support, one of the few reality shows in which contestants weren't paraded for the cameras like circus animals.

In its empathetic wake, any number of twists on the get-fit formula have flooded the airwaves. It's a genre unto itself now, one in which ropy-armed drill sergeant wannabes are the new Simon Cowell. And it's custom-made for summer viewing, when pudding apostles might need to be reminded of the consequences of their consumption.

Of this year's new entrants, "Biggest Loser" spinoff "Losing It With Jillian" seems on its surface to be a brand-extension-for-the-sake-of-another-brand-extension. Not only does it tap the lamest reality-TV contrivance in the book (having an outsider move in with a Joe/Josie Middle America family), but it stars imposingly square-jawed trainer Jillian Michaels. You know Jillian from "The Biggest Loser." She's the one whose cold-eyed glare alone melts five pounds of flab from any torso. She scares the hell out of me.

Yet on "Losing It With Jillian," she comes across as intelligent and empathetic, and somehow transforms by-the-books self-improvement into something vaguely resembling emotional and physical deliverance. Yes, the show might feature too much of her gee-whiz inspirobabble ("you can do ANYTHING!") and she's too quick to heap wild praise on her charges, whether with an affirming "yeah!" or by labeling them "rock stars" (note to everybody on every show ever: Mick Jagger is a rock star. The out-of-shape guy who managed to log 10 minutes on a treadmill is not. Thank you).

But "Losing It" is a rare TV experience in which the viewer feels himself being manipulated and doesn't mind, even during a product-placement sojourn in which Subway sandwiches are all but presented as a healthier alternative to Brussels sprouts. The workouts themselves are fairly ingenious -- Michaels starts each session by working with whatever happens to be around the house, which means that rocks are tossed and tractors are pulled -- and the mentality is more "pace yourself" than "suck it up."

What can I say? I bought it. At the end of Tuesday night's episode, when the Vivio family emerged from two pie-less months fit and happy, I found myself smiling. I felt genuinely thrilled for these people, that they made the adjustments that should, in theory, add many happy years onto their lives. I'm going to the doctor now to have my underfunctioning cynical gland checked out. 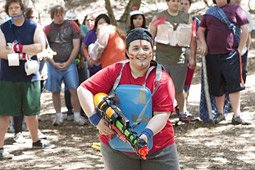 'Huge'
For a dramatic take on the weight-loss experience, I tuned into ABC Family's much-hyped "Huge." Set at a weight-loss camp, the show explores teen drama in an environment heretofore ignored by network and cable programmers.

It's an opportunity missed. As unique and rich as the setting might be, "Huge" is all concept and no execution. Its character connections are clich� (you know, it is allowable to use a band other than The Pixies as a touchstone of pop-cultural cool) and the dialogue pinballs between weak puns ("thinspiration") and histrionic pronouncements ("you'd rather risk your life than change it!"). Similarly, the plot twists are obvious -- of course the hard-ass camp director was once a camper, and bears the psychic scars that comes with it -- and casually chucks in too many movie-of-the-week twists.

The problem may be one of alignment -- namely, attempting to reconcile the show's smarter/deeper ambitions with the brand identity of the network upon which it airs. ABC Family has carved out a lovely little niche for itself as a WB-lite, airing shows that mine teen angst without doting on its ickier elements.

"Huge" wants it both ways, though. It wants to connect with teen and young-adult viewers with wryness (courtesy of star Nikki Blonsky and her excellently barbed delivery), but it also wants viewers to, like, feel. You can count on one hand the number of shows that adeptly balanced the sour with the sweet. Throw in frequent pandering to the network formula -- this is one show for which the cute-boy quota, delivering this cast a floppy-haired trainer who's deaf in one ear, should've been waived -- and "Huge" devolves into something its smart, funny and fearless protagonist would loathe.