Coca-Cola, Verizon and Volkswagen have nailed down premium packages on Fox and Telemundo
READ THIS NEXT
How to turn your brand into a big winner in the 2021 awards season 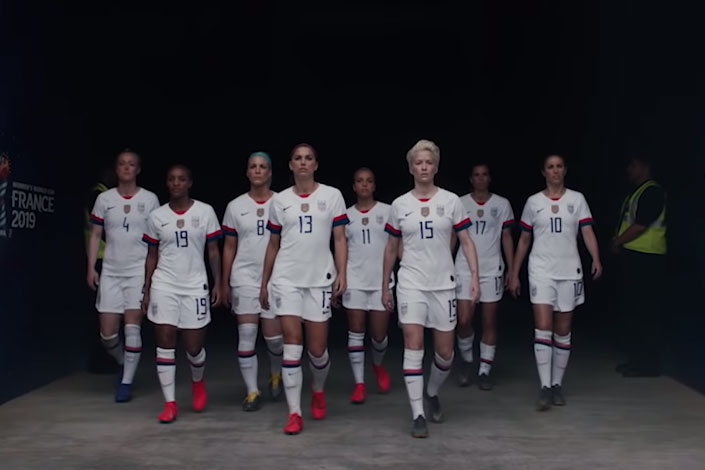 As the U.S. women’s national soccer team prepares to defend its World Cup title in France, advertisers are eager to mop up all the impressions sure to be in store if Carli Lloyd, Megan Rapinoe, Alex Morgan and the rest of the squad earn a spot in the July 7 final. And while the American side is a favorite to win the month-long tourney, they also face their most formidable competitive field in the likes of Germany, England and the host team.

That the USWNT steamrolled its way to a berth in the Cup (they outscored their opponents 26-0 in the qualifiers) was a welcome development for Fox Sports, which last year had to contend with a no-show U.S. men’s team. But the big payoff that comes with another American title showdown isn’t as automatic as a penalty kick; if the U.S. and Les Bleues both win their groups, they’ll meet in the quarterfinals. The last time the USWNT beat the French was in 2016; both teams are odds-on favorites to win the whole shebang.

But we’re getting ahead of ourselves. Regardless of how things shake out next month in Parc Olympique Lyonnais, a number of estimable stateside brands have gone all-in on this year’s World Cup. Three sponsors that will be particularly visible throughout Fox’s coverage of the event are Verizon, Volkswagen and Coca-Cola, the latter of which does double duty as an official partner of global soccer leader FIFA and a key backer of the USWNT.

Having signed on as premium sponsors of last year’s men’s tourney, Verizon and Volkswagen will serve in similar capacities throughout the June 7-July 7 event. Verizon replaces Nationwide as the presenting sponsor of Fox’s one-hour pregame show “World Cup Live,” while USWNT partner Volkswagen holds down the same role during the postgame offering “World Cup Today.” As was the case during the 2018 FIFA World Cup, both presenting brands are investing heavily in traditional ad units in addition to their respective premium sponsorships.

Coca-Cola, meanwhile, has stepped in as presenting sponsor of Fox’s World Cup Halftime show. This is a big glow up for the brand, which according to iSpot.tv data didn't advertise during Fox’s coverage of the 2015 Women’s World Cup. (Coke signed on as the official nonalcoholic beverage sponsor of U.S. Soccer some 45 days before the 2015 event kicked off.)

Also committing to a premium buy is the travel booker Hotwire, the presenting sponsor of cable network FS1’s nightly wrap-up program “Fox Soccer Tonight.” But for the three-dozen spots Hotwire aired during college football broadcasts last season (many of which ran in primetime) and some buys in ESPN’s “SportsCenter,” this marks a rare deep sports-media dive for the brand.

Having already begun blitzing soccer fans in the U.K. and Colombia with its new football-themed campaign, FIFA sponsor Visa is also expected to be well represented on Fox’s airwaves, as is USWNT partner Nike. While the sneaker giant has yet to air its anthemic “Dream Further” spot on U.S. TV, the three-minute execution has generated nearly 20 million views on Twitter in just six days.

Twenty-two of this year’s World Cup matches will air on Fox, while FS1 will carry 27 and FS2 three. Naturally, the three scheduled U.S. group stage matches are likely to serve up the most ad impressions; the USWNT takes on Thailand on June 11, Chile on the 16th and Sweden on the 20th. All three matches will air on the Fox broadcast network.

Four years ago, the U.S. squad averaged 4.28 million viewers and a 2.5 household rating in its first three matches, one of which was carried by FS1. The home audience began growing considerably once the team reached the semifinals (the U.S.-Germany match averaged 8.43 million viewers and a 4.7 rating on Fox), and the deliveries really skyrocketed as the USWNT rolled over Japan 5-2 in the 2015 final. According to Nielsen, that broadcast averaged a whopping 25.4 million viewers and a 12.9 rating, making it the all-time most-watched women’s soccer game.

Of course, if Fox is to enjoy a reprise of those numbers, Team U.S.A. players will first have to make it past a French squad that has given them fits over the last three years. Less likely to put up such huge deliveries is Spanish-language broadcaster Telemundo, which served up 1.27 million viewers during its coverage of the 2015 final.

Telemundo’s biggest stumbling block lies in the relative dearth of Latin American teams that qualified for this year’s event. With Mexico having failed to earn a berth in the French tourney, Telemundo viewers may find a viable rooting interest in the No. 10 ranked Brazil squad. Chile, which is the fourth lowest-rated team in the field of 24, isn’t expected to make it out of the group stage.

If Telemundo doesn’t expect to replicate the success it enjoyed during last year’s men’s tournament, its overall share of summer GRPs should accumulate nicely over the course of its 52 World Cup broadcasts. The network also has bundled its FIFA inventory with its coverage of the 2019 Copa América, and while the two soccer events will overlap on no fewer than 24 days, Telemundo’s Ray Warren last month said that he anticipated very little in the way of cannibalization. (While both tourneys conclude on July 7, the Women’s World Cup final will have wrapped a good three hours before the Copa América is set to kick off in Rio.)

Among the sponsors Telemundo has booked for its “Summer of Soccer” are Coca-Cola, Boost Mobile, corporate parent Comcast, Mazda and DishLatino. Volkswagen and Verizon are locked in for partnerships similar to those they’ve worked out with the English-language broadcaster, inasmuch as the automaker will serve as the presenting sponsor of Telemundo’s World Cup halftime show while the wireless brand will carry out the same mission during the network’s Copa América coverage.

Two brands that will leverage the World Cup’s sizable audience of younger women are L’Oréal Paris and Vagisil. L’Oréal is celebrating the accomplishments of broadcasters Viviana Villa and Carlota Vizmanos in a series of branded vignettes, while Vagisil looks to promote its new Scentsitive Secrets line with a video series highlighting several USWNT players.

Telemundo’s “Summer of Soccer” initiative will include 750 hours of live sports programming, a DVR-proof slate designed to maximize the impact of its advertisers’ investments. Speaking to reporters during Telemundo’s upfront teleconference, Warren said “the usual suspects” had been snapping up the network’s summer soccer inventory. Chief among these were automotive, beer finance and soft drink brands.