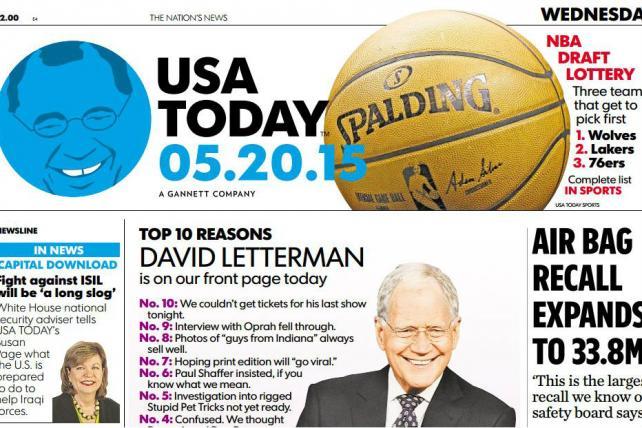 USA Today could stop publishing a daily print newspaper as soon as in the next "five or six years," the paper's editor-in-chief, David Callaway, said in response to a question during an Internet Week New York panel Wednesday.

To be sure, a print product of some kind will likely continue for "the rest our careers," he added. And despite his prediction, Mr. Callaway also said the daily print newspaper remains a lucrative product for USA Today.

Mr. Callaway, who became USA Today's top editor in 2012, was part of a "Future of Media" panel with executives from Vox, Business Insider and The Trade Desk, which automates digital advertising sales.

The statement about USA Today's future came as the paper's parent company, Gannett, is preparing to spin off the newspaper division this summer to focus on its more lucrative local TV stations. Although USA Today and 81 other daily newspapers comprise the bulk of Gannett's revenue, the segement is in decline, with publishing revenue falling 9% year-over-year in the first quarter.

USA Today's average Monday through Friday print circulation dropped 17% during the six-month period ending Sept. 30, 2014, compared with the same time frame the prior year, according to the Alliance for Audited Media, which tracks newspaper and magazine circulation.

The newspaper's overall circulation, however, has surged thanks to the way the Alliance for Audited Media now counts it, including digital editions as well as USA Today sections that appear in other Gannett-owned newspapers.

In March, USA Today offered buyouts to about 90 of its roughly 600 employees companywide.