The Dubs Are No Duds: NBA Finals Are Most-Watched in 19 Years | Ad Age
Skip to main content
Sign In Register

The Dubs Are No Duds: NBA Finals Are Most-Watched in 19 Years 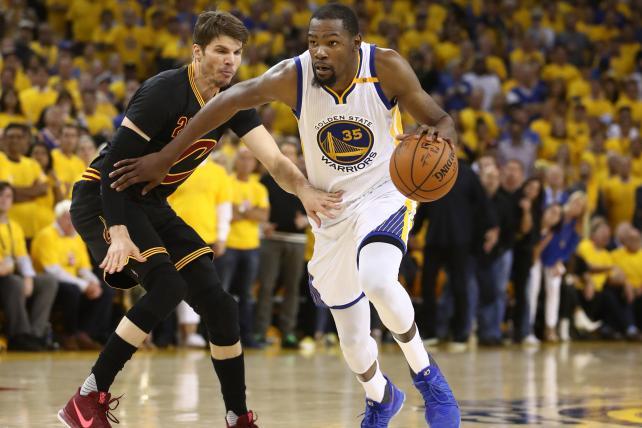 Kevin Durant of the Golden State Warriors is defended by Kyle Korver of the Cleveland Cavaliers in Game 5 of the 2017 NBA Finals.
Credit: Ezra Shaw/Getty Images

As much as the Golden State Warrior's particular brand of metronomic perfection arguably took much of the fun out of the NBA postseason, hoops fans didn't seem put off by the Dubs' relentless march to victory. In a development that all but flew in the face of conventional wisdom, the Warriors' five-game trouncing of Cleveland in the 2017 NBA Finals managed to deliver the largest nightly audience in nearly 20 years.

According to Nielsen live-plus-same-day data, the short series averaged 20.4 million viewers on ABC, making it the most-watched NBA Finals since 1998, When Michael Jordan and the Chicago Bulls scared up an average audience of 29 million viewers during their six-game set against the Utah Jazz. In claiming its second NBA title in three seasons, Golden State somehow managed to out-deliver last year's thrilling seven-game Finals, which averaged 20.3 million viewers.

That a five-game series put up bigger numbers than a full seven-game showdown is particularly remarkable given the size of the crowd that tuned in to ABC during last year's deciding broadcast. (Cleveland's thrilling 93-89 victory over the Warriors averaged a staggering 31 million viewers.)

While the overall deliveries for this year's Cavs-Warriors skirmish set a record for ABC, household and demo ratings were down slightly versus last year's series. Per Nielsen, the latest chapter in the history of the Cleveland-Golden State rivalry averaged a 7.4 in the core TV demo, which works out to just shy of 9.5 million adults 18-49. The 2016 NBA Finals delivered a 7.5 rating. This year's average household rating (11.4) was also down a tenth versus the year-ago series.

As much as ABC would have welcomed a sixth game, the network was fortunate that Cleveland managed to steal a Friday night home outing and thereby avoid a rare Finals sweep. The last time the championship series was decided in four games was back in 2007, when San Antonio made short work of LeBron James and the Cavs. With an average draw of just 9.29 million viewers and a 6.2 household rating, the truncated series still stands as the all-time least-watched, lowest-rated NBA Finals.

Having secured the services of Kevin Durant last summer, Golden State effectively called dibs on the 2017 championship trophy before the season even got underway. And unless Durant and Steph Curry somehow manage to get eaten by sharks or abducted by hostile extraterrestrials, the Warriors look poised to steamroll their way through many more championship seasons. Get used to it.

If the gulf separating the league champs from the runners-up seems practically unsporting, the Dubs' dispassionate dominance of the NBA is a recent development. The Warriors made history this season by sweeping all three of its playoff series, which took a fair amount of ad dollars off the table for league TV partners TNT and ESPN/ABC. (The Cavs also didn't do the cable networks any favors, as they advanced to the Finals after appearing in just 13 playoff games.) With Durant in the lineup, Golden State this postseason played in just 17 of 28 possible games, whereas last year's team took a more scenic route to the finals, grinding out 24 of 28 possible games.

Naturally, a reduction of games puts the squeeze on ad inventory. According to Kantar Media estimates, TNT and ESPN/ABC raked in some $1.03 billion in ad sales during the 86-game 2016 NBA playoffs. Meanwhile, this year gave rise to the fewest NBA postseason games (79) in 10 years, and this smaller yield gave rise to proportionately fewer ad dollars. Nomura Instinet analyst Anthony DiClemente estimates that overall postseason NBA ad sales revenue was likely down as much as $130 million versus last year's haul.

As is generally the case, the biggest-spending categories that bought ad time in the 2017 NBA playoffs were automotive, telecom, quick-service and casual-dining restaurants, alcoholic beverages and insurance. Among the most visible brands were official NBA sponsors Mountain Dew, Kia, State Farm, Anheuser-Busch and Nike.

If the prospect of an inventory-shriveling Dubs dynasty is perhaps unsettling to the NBA's TV partners, this year's ratings suggest that the ad sales execs will be able to offset some of those losses by raising their rates. Meanwhile, recent history suggests that parity has a way of drawing out playoff series even when one or two teams are ruthlessly mowing their way through their brackets. In fact, the number of postseason games that are staged every year is uncannily consistent; in the last 15 seasons, the range of playoff and Finals games played is relatively narrow (between 79 at one extreme and 89 at the other), while the average number of postseason broadcasts over the same period is a solid 84, or 80% of a possible 105 games.

Whatever grumbling the hegemonic Warriors may inspire from fair-weather hoops fans, it's unlikely that a lengthy successful streak will send viewers scrambling for something else to watch in June. The last NBA franchise that ran roughshod over the rest of the league was MJ's Bulls, which continued to command huge ratings even in the midst of their second three-peat. According to Nilesen the average turnout for the 1996-98 NBA Finals was 26.5 million viewers, a number that no subsequent team came within shooting range of until the Warriors and Cavs began their historic pas de deux in 2015.