The Washington Post Wants App Readers to Try, Then Buy 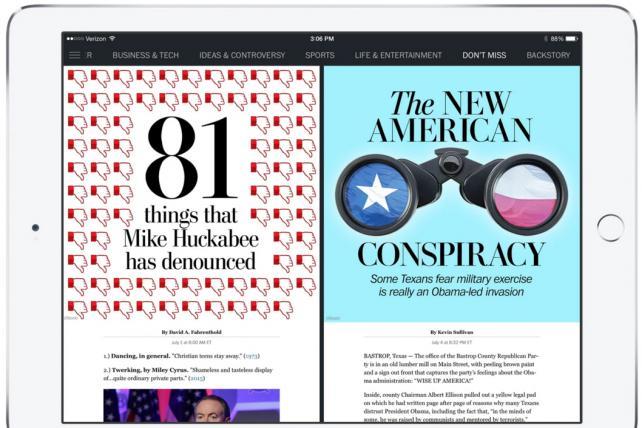 In recent months, The Washington Post has proven to be a traffic powerhouse, even overtaking The New York Times in unique visitors for October and November.

A bigger challenge, though, is making money. Like the Times, the Post is looking at digital subscriptions as a major revenue-generator, particularly as industry-wide declines in print circulation and ad revenue continue abated. But the company isn't in a rush to cash in.

"We don't worry too much about monetizing upfront," said Stephen Hills, speaking in an interview last week just before concluding a 13-year tenure as the Post's president and general manager.

Mr. Hills said the Post is focused on "letting people experiment" with the company's new mobile offerings, which it hopes will convince more readers to pay $9.99 per month for the Post's entire suite of national digital products.

"When people test us, they like us," Mr. Hills said, making an analogy to a restaurant that is trying to attract new customers.

That mentality explains why the Post has tried discounting mobile and digital access, and offering free giveaways. In particular, the Post has offered deals to Amazon customers, stemming from founder Jeff Bezos' ownership of the newspaper.

Amazon Fire devices come with a Post app pre-loaded. Access is free for six months; after that, an additional six months of use costs only $1. After a year, users can get complete, national digital access for $3.99 per month, a 60% percent discount. (A package that also includes local content costs an extra $5 per month.)

An individual with knowledge of the company's mobile products said a "ton" of Kindle Fire users have paid for the extra six months of access, and have benefited from the discount thereafter.

(On Amazon's website, several customers have complained about having the app pre-loaded, and not being able to delete it. "I did not order the Washington Post and I want it off my kindle," one user wrote in the comments section. "It was downloaded without my permission." Another called it an "unsolicited app," giving it a one-star rating.)

The Post's national app was released for iOS devices in July, and Mr. Hills said it represents the company's best opportunity to tap into a huge pool of potential new subscribers -- especially individuals outside the D.C. area. New users get one free month of access.

As a now-private company, it's anybody's guess how many digital subscribers the Post has signed up.

Mr. Hills said the company has seen "a good rate of subscription" growth thus far, and has set ambitious targets for the future.

"He's a guy who tends to have very high ambitions," Mr. Hills said of Mr. Bezos, who bought the newspaper in 2013.

A media executive with knowledge of the Post's general strategy echoed Mr. Hills and said the company is prioritizing future success.

"They are playing a long game and the more subs they can bring in at any price will give them longer term opportunities," this person said.

The New York Times, a public company, reached the one million digital subscriber mark this fall, but has had less success monetizing its purely mobile products. The company's NYT Now app was converted into a free product this summer, and the Times' Cooking app has remained free of charge.

Susan Bidel, a senior analyst for Forrester Research, described the Post's digital subscription approach this way: "What they're trying to do is rack up numbers."

Asked about the Post's discounted mobile pricing for Fire customers, she said "it's too low."

"I just can't imagine that that could be on the plus side of any accounting system. Let's put it that way," Ms. Bidel said.

Digital advertising is also an important component of the Post's business strategy, but Mr. Hills said subscription revenue is especially important to the company because it offers a degree of financial stability.

Ms. Bidel said that companies have to spend money to make money, especially when it comes to advertising new mobile and digital products to an audience that's not used to having to pay for content.

"Generating usership is all about how much money you want put against marketing," she said.