Cowboy Up: NFL Playoff Ratings Are Down 16% | Ad Age
Skip to main content

Cowboy Up: NFL Playoff Ratings Are Down 16% 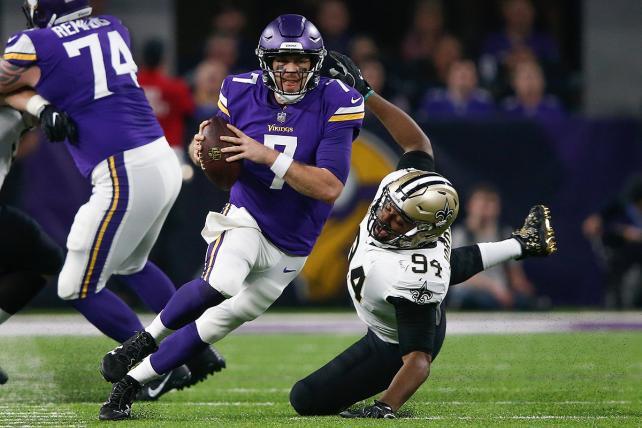 Sunday's games were particularly enthralling, including a Vikings-Saints pulse-pounder, but the absence of popular teams such as Dallas and Greenbay all but guaranteed a ratings hit.
Credit: Jamie Squire/Getty Images

The NFL's season-long ratings crunch has carried into the playoffs, as the absence of a number of marquee franchises have made for some tough year-to-year comparisons in the Nielsen numbers.

According to the final live-plus-same-day data, the weekend's four divisional round broadcasts averaged 30.2 million viewers and a 16.9 household rating, and while those are elite results by general TV standards, they were far off the mark from last season's analogous games.

Overall viewership for the four games fell 16 percent versus the year-ago average of 36 million viewers, and household ratings slipped 13 percent from a 19.5.

Sunday's games were particularly enthralling: In a show of offensive firepower on both sides, spoiler Jacksonville hung on to beat Pittsburgh 45-42, while Minnesota stole a win from New Orleans on a 61-yard touchdown pass with 10 seconds left on the clock. But the popularity of postseason no-shows Dallas, Green Bay, Seattle and the New York Giants all but guaranteed that the ratings would take a hit.

For example, Fox on Sunday posted the playoff's biggest deliveries to date, averaging 35.6 million viewers and a 19.3 household rating with its coverage of the Saints-Vikings pulse-pounder. And while those out-sized stats make it near-certain that the game will stand as one of the top five most-watched broadcasts of 2018, they marked a precipitous drop compared to Fox's record-smashing Packers-Cowboys showdown of Jan. 15, 2017. Featuring the two top-rated NFC teams in a game Green Bay put away in the final minute of regulation, the Cowboys' 34-31 defeat averaged a staggering 48.5 million viewers and a 26.1 household rating. It became the year's No. 2 most-watched, highest-rated broadcast, behind only Fox's presentation of Super Bowl LI.

Through the opening two weekends of playoff action, the networks are averaging 27.8 million viewers, down 16 percent compared to the 33.2 million viewers who tuned in for the wild card and divisional rounds a year ago. Household ratings for the first eight postseason games were down 14 percent to a 15.8.

The drop in the playoff audience comes on the heels of a regular season that saw deliveries in all regional and national NFL TV windows fall 9 percent to 14.9 million viewers, while household ratings were down 8 percent to an 8.6.

Among the most visible advertisers who bought time in the first two rounds of the playoffs were Verizon, Bud Light, Geico, Amazon Echo, Nationwide, Ford, DirecTV, Progressive, Southwest and Honda. Studio buys included teasers for Twentieth Century Fox's "The Post," Lionsgate's "The Commuter," Marvel's "Black Panther" and Warner Bros.' "12 Strong," "The 5:17 to Paris" and "Paddington 2."

The NFL playoffs continue Sunday at 3:05 p.m. ET on CBS, when the Jaguars and Patriots play for the right to represent the AFC in the Super Bowl. Jacksonville is the only team to advance to the championship round that wasn't featured in a national TV window during the regular season.

The road to Minneapolis continues later the same evening on Fox, which hosts the NFC Championship Game featuring the Vikings and Eagles. Should Minnesota advance, they will become the first NFL team to play in a Super Bowl on their own home turf.