Six-time Super Bowl champ makes a move, plus other news from around the tube
READ THIS NEXT
Netflix results suggest pandemic streaming boom is waning 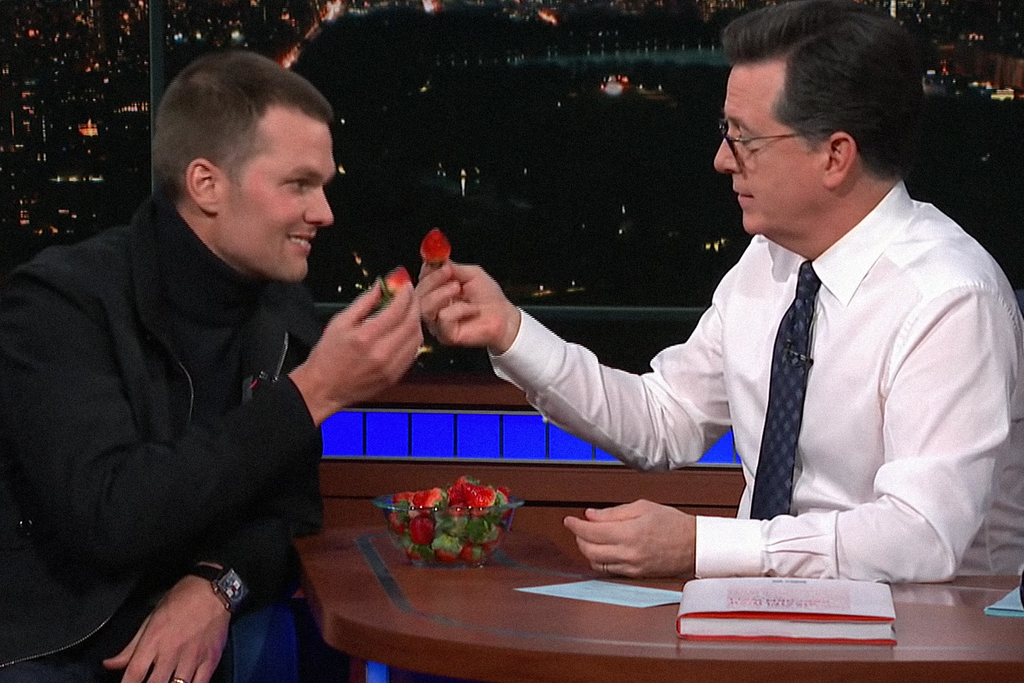 Touchdown Tommy braves the unknown as he nibbles on a forbidden strawberry with his chum, TV’s Stephen Colbert, in March 2018.

Welcome to the latest edition of Ad Age TV Brief, our roundup of news from the world of broadcast, cable, streaming and beyond. *Extremely Mr. Roarke Voice* Smiles everyone, smiles!

The Brady Bunch
WME has added another superstar to its stable of world-class athletes/pitch[wo]men, landing New England Patriots quarterback Tom Brady in a deal that will see the agency rep the six-time Super Bowl champion in his promotional endeavors. Rebecca Sun of The Hollywood Reporter has the scoop.

Brady, who devotes much of his resources to promoting his TB12 brand, is arguably the world’s biggest TV star; per Nielsen, his nine appearances in the NFL title tilt add up to a staggering 898.7 million viewers. Even in the regular season, Brady’s a world-class draw; in 2018, the Pats averaged 19.6 million viewers and an 11.5 household rating in their eight national TV windows, blowing away broadcast’s top three entertainment series: “The Big Bang Theory” (13.2 million), “NCIS” (12.1 million) and “Young Sheldon” (11.2 million).

While Brady has endorsed a range of brands including Under Armour, UGG and Tag Heuer, it’s unlikely that WME will have him spieling for Pizza Hut any time soon. In thrall to a monkish, anti-inflammatory diet, Touchdown Tommy consumes neither flour, nor tomato, nor cheese.

In the Air Tonight
The Wall Street Journal’s Joe Flint and Drew FitzGerald have the skinny on a legal motion filed by the Big Four broadcast networks (ABC, CBS, NBC and Fox), which aims to put the free streaming service Locast out of business. The lawsuit, which was filed in U.S. District Court in the Southern District of New York, contends that Locast is retransmitting the signals of the networks’ local TV stations without permission. Locast, a nonprofit service backed in part by satellite TV heavies DirecTV and Dish Network, claims it is in compliance with the 1976 Copyright Act. The last time broadcasters faced a similar threat to their retransmission consent fees, they joined forces to put Barry Diller-backed Aereo out of business, a case that went all the way to the U.S. Supreme Court.

Today Your Love, Tomorrow The World
The long-anticipated reunion of CBS and Viacom has yet to come to fruition, but people in the know are telling NBC News’ Claire Atkinson that Shari Redstone’s ambitions aren’t likely to stop at merely getting the band back together. The president of National Amusements, the controlling shareholder of the two media companies in the Redstone family empire, “has held conversations about quickly pursuing acquisitions that would help the company compete with other sizable media operations,” Atkinson reports. If Redstone is to compete with the likes of Disney, Comcast and WarnerMedia, she won’t be satisfied with merely melding together the broadcast and cable assets; instead, she’ll also have to go after the hides of, say, a Discovery or a Sony Pictures.

‘I’m wearing both contacts on the same eye!’
SodaStream is hopping on the instant-nostalgia bandwagon, luring “Beverly Hills, 90210” star Tori Spelling as the spokesdonna for its sparkling water maker. As Sean Keane of CNET reports, Spelling is an apt partner for the PepsiCo brand, as she not only embodies a very particular aspect of ‘90s pop culture—for those suffering from a certain level of irony poisoning, “Donna Martin Graduates!” was the Grunge-era “Fifty-Four Forty or Fight”—but is set to appear in Fox’s kinda-sorta reboot, “BH90210.”

While it’s too early to guess how canny the pairing of the West Beverly High School alum and SodaStream’s Patrick Nagel-inflected product launch will shake out, the siren song of all things retro may not be enough to move the marketing needle. Fox summer series are averaging a less-than-stellar 644,500 adults 18-49, which suggests that not many demographically desirable viewers have been around to see the in-house “BH90210” promos.

Fat City
Despite all the noise cable TV execs have made of late re: slashing commercial loads, the ad glut is showing no signs of slimming down. Commercial time rose 1 percent in the second quarter, according to MoffettNathanson analyst Michael Nathanson, with the average allotment inching up to 12.2 minutes-per-hour versus the year-ago 12.0. For viewers who bemoan the unceasing tide of commercial interruptions, the biggest offenders in the cable space were Viacom, with 14.3 minutes of advertising per hour, A&E Networks (14.0 minutes) and AMC Networks (13.0). As Nathanson’s note to investors demonstrates, aggregate ad loads have increased for the last five quarters.

Big ups to Bobby V.
Broadcasting and Cable’s Jon Lafayette reports on a big promotion for Discovery’s Bobby Voltaggio, who’s been promoted to executive VP, ad sales revenue and planning. One of the last senior sales execs still standing from the days before the Scripps Networks merger, Voltaggio is a planner and strategist par excellence—we were in the room with him while he and his former boss Joe Abruzzese hashed out Discovery’s 2012-13 upfront war plan—and is also a shrewd negotiator; as such, he’ll continue to lead upfront and scatter-market haggling and manage Discovery’s pricing and volume strategy.

Odds and ends
Some bump-and-run coverage of things we took note of over the course of the week:

C3POh No!
As younger viewers continue to scurry away from linear TV like so many high-strung dogs decanting tinkles and yelps as they scatter at the approach of a vacuum cleaner, ad impressions have crumpled. With an average C3 draw of just 1.07 million adults 18-49 in primetime, the Big Four nets in the second quarter saw their commercial deliveries slide 10 percent versus the year-ago period. Compared to the same time two years ago, C3 deliveries were down 22 percent, while the three-year slide among 1.57 million demographically viable viewers was 32 percent.

That’s debatable
CNN’s coverage of round two of the 2020 Democratic candidates debate series averaged 9.75 million viewers and a 2.3 in the news demo (adults 25-54). That marks a 42 percent decline in overall deliveries compared to the NBC/MSNBC/Telemundo debates on June 26 and June 27, and a 36 recent drop in the demo, although cable-to-broadcast comps are admittedly in apples-to-hand-grenades territory. Wednesday proved to be CNN’s biggest night, as its average draw of 10.8 million viewers marked its second-highest Dem debate delivery behind only the Oct. 13, 2015 Hillary Clinton-Bernie Sanders showdown, which scared up 15.8 million viewers.

It’s official, old buddy: I’m a has-been
“Once Upon a Time in America,” Quentin Tarantino’s ode to washed-up middle-age men, profligate whiskey-sour consumption and revisionist history, has in its first five days raked in $55.3 million in gross box office sales, which if nothing else suggests that the occasional R-rated film with greater aspirations than boosting action-figure sales and theme-park gate receipts can still eke out a few bucks at the box office. The director’s ninth film already has earned back Sony’s TV spend; per iSpot.tv estimates, the studio has plunked down $21.1 million for inventory in a range of shows such as ESPN’s “SportsCenter,” CBS’s “The Late Show with Stephen Colbert” and NBC’s “The Tonight Show Starring Jimmy Fallon.”

Sony’s oddest buy thus far—and this absolutely had to be the result of some sort of wonky ADU—was two 30-second “Once Upon a Time” units in a July 24 screening of “Alvin and the Chipmunks: The Squeakquel” on Nick at Nite.

RIP, No. 15
Thurman Munson died 40 years ago today. The Yankee captain, who was killed in a plane crash eight miles from his home in Canton, Ohio, appeared in the most-watched, highest-rated World Series in TV history. NBC’s six October 1978 broadcasts averaged 44.3 million viewers and a 32.8 household rating. So beloved was Munson in your correspondent’s home that they named a dog after him. Munson (the dog) was afraid of bees and hats.

And finally...
No, the other football
NBC Sports’ coverage of the English Premier League kicks off on August 11, or a little less than a month before the return of “Sunday Night Football.” NBCSN’s coverage kicks off with a match between Chelsea and Manchester United, and features the debut of American sensation Christian Pulisic.