Agency Stocks on Rebound as Investors Bet on Ad Recovery

CHICAGO (AdAge.com) -- They're back: Shares in WPP, Omnicom Group, Publicis Groupe and Interpublic Group of Cos. in December 2010 were at or near their highest points since the start of the 2007 recession.

Agencies are in recovery mode. U.S. ad agencies have added 9,200 jobs since bottoming at a 16-year low in January 2010, according to figures from the Bureau of Labor Statistics.

Agency companies recorded solid revenue gains in 2010, reflecting both a rebound in traditional advertising and growth in digital offerings and marketing services.

U.S. revenue growth has been particularly strong. WPP said in its third-quarter 2010 financial report: "The United States, which was the first region affected by the global economic crisis, has been the first to recover."

WPP Group Chief Executive Martin Sorrell said at a December 2010 investors' conference: "The amazing thing about this year is that America is performing, the United States is performing like an emerging market."

Agency bosses are cautious about hiring. At the investors' conference, Mr. Sorrell's PowerPoint slides included this imperative: "Key management task will be to balance revenue growth and headcount growth." 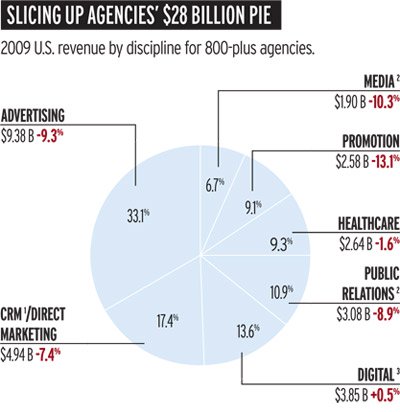