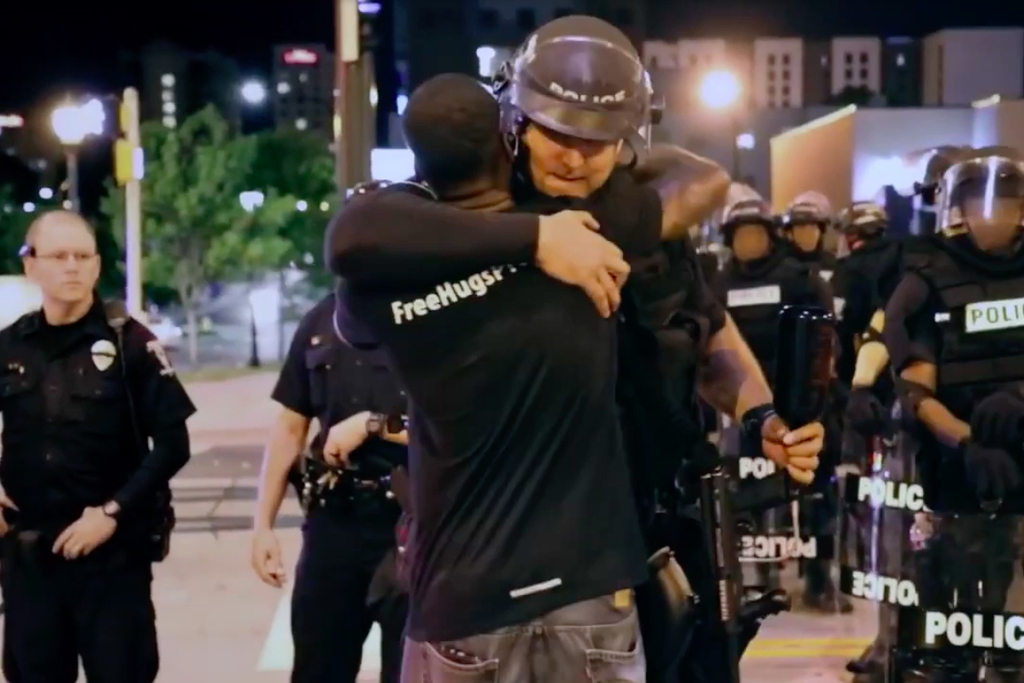 Bud’s Super Bowl ad supports ‘typical’ Americans
What with ads for Bloomberg and Trump running in the Super Bowl, and the NFL highlighting police shootings of black men, watching this year's commercials during the big game could get politically heated. So Budweiser, as E.J. Schultz reports, is playing it safe with an ad that, while touching on political themes, stays patriotically neutral.

In an ad helmed by “Hurt Locker” director Kathryn Bigelow for David Miami, negative stereotypes of Americans are contrasted with images of people doing good. For example, we'll see a firefighter battling flames as the voiceover bemoans “typical Americans” who are always “showing off their strength,” a soldier’s surprise homecoming (”showing up uninvited”) and a man giving his shirt to a shirtless man in a subway car (“removing their clothes in public”).

The spot includes footage taken from two protest marches, writes Schultz, but “in a way that seems aimed at keeping the brand neutral.” Meanwhile Bud's VP of Marketing Monica Rustgi says it's interested in “debunking those stereotypes and rising above.”

Conceptual art meets ketchup in Heinz Super Bowl effort
If Bud is playing it safe at the Big Game this year, Heinz is going somewhat experimental with its first work through Wieden & Kennedy New York. The brand is teasing its spot, helmed by director Roman Coppola (in his Super Bowl commercial debut) in a split-screen format that, as Ad Age’s Jessica Wohl writes, "suggests the whole effort is meant to get people to rewind and rewatch the ad.”

The film seemingly shows four stories at once, juxtaposing scenes including a red-wigged clown sitting in a diner booth with a trio straight out of a Star Trek spoof along with a giant dog, a dining room that seems to be borrowed from Clue and what looks like an alien planet. Each scene has one thing in common: a bottle of Heinz.

Coppola describes the effort in a statement as “a conceptual media art piece.” Meanwhile a Heinz spokesperson commented somewhat cryptically, “Fans should be ready to hit rewind." If they do, Wohl points out, they "will have spent two minutes looking at Heinz ads while Heinz will have shelled out only enough for a 30-second slot." Clever.

Chase has a new CMO
Industry watchers keeping a close eye on who would succeed Kristin Lemkau, tapped for an operating role at Chase running its wealth management business, have their answer. Leslie Gillin is the new chief marketing officer for the Chase, J.P Morgan and corporate brands. Writes Adrianne Pasquarelli: "As it was for Lemkau, this is a promotion for Gillin, who has been with Chase for three years, most recently as president of the co-brand credit card business. That work has involved dealing with Chase partners in hospitality, airlines and entertainment. Her work has also grown the revenue of the co-brand card portfolio." Prior to Chase, Gillin logged time at financial services rivals including Bank of America and Citi.

Speaking in Davos, Mendelsohn said the hack brings to light potential security weaknesses in smartphone operating systems, reports Bloomberg News. “One of the things that it highlights is actually some of the potential underlying vulnerabilities that exist on the actual operating systems on phones,” she said in a Bloomberg Television interview at the World Economic Forum Thursday.

Mendelsohn added that Facebook would take any allegations that its service was used in a hack "very seriously" and would look into it. Her comments follow reports that Bezos’s iPhone might have been hacked after he received a message via WhatsApp from Saudi Arabia’s Crown Prince Mohammed Bin Salman.

Just briefly:
More Super Bowl: Discover has joined the ranks of Big Game advertisers this year with two spots, each with a “Yes” and “No” dynamic, to demonstrate Discover’s acceptance rate and no annual fee, writes Adrianne Pasquarelli. The brand is in the midst of an agency review, but the spots were done by The Martin Agency.

The Inclusion Bowl: Hummus brand Sabra’s Super Bowl ad will feature feuding “Real Housewives of New Jersey” co-stars Teresa Giudice and Caroline Manzo, drag queens Kim Chi and Miz Cracker and rapper T-Pain, reports Jeanine Poggi. Kim Chi, a South Korean-American drag queen, artist and TV personality best known as a contestant on “RuPaul’s Drag Race,” illustrates how marketers are including more underrepresented groups in this year's game. “Ten years ago if you would have said there would be a queer artist of color in a Super Bowl ad you would have laughed at it,” Kim Chi told Poggi.

Jim Lehrer dies: PBS anchorman Jim Lehrer, known for the “MacNeil/Lehrer NewsHour" and as an astute moderator of political debates, has died at age 85. "For Jim, being a journalist was never a self-centered endeavor," writes PBS in its obituary. "He always told those who worked with him, 'It's not about us.'"

Campaign of the Day: In a clever blend of topicality and media placement, a U.K print ad by Expedia made a cheeky nod to Prince Harry and Meghan Markle's decision to move to Canada after stepping down as senior royals. Created by Ryan Price, a copywriter at Saatchi & Saatchi London, the ad simply features a photo of a beautiful Canadian landscape, an Expedia search box with "Canada" typed in, and the caption "Escape the Family." It ran in U.K. newspapers next to stories about the couple's departure. ‘We had a bit of luck as every article mentioned Canada," Price told Creativity; take a look here.