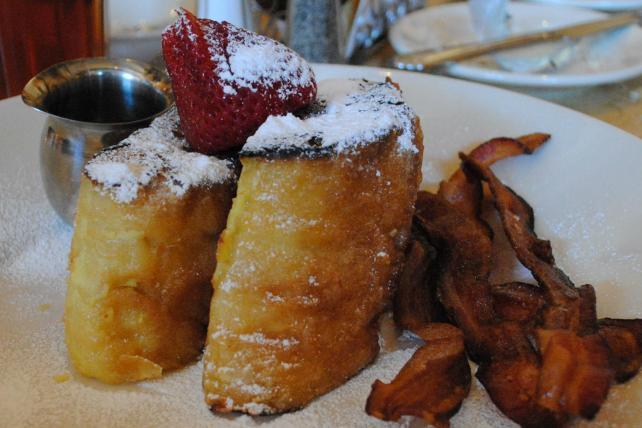 The Bruleed French Toast from The Cheesecake Factory has over 2,700 calories.
Credit:

If you want to indulge in Cheesecake Factory's Bruleed French Toast, you'll have to spend seven hours swimming laps to burn off its 2,780 calories.

Such a calorie count lands that dish -- and two others from Cheesecake Factory -- atop the worst meals in America, according to the Center for Science in the Public Interest Xtreme Eating awards. In all, Cheesecake Factory has three meals that made the top nine. The french toast meal, which comes with a side of ham or bacon, has almost five days' worth of saturated fat (93 grams), 2,230 milligrams of sodium (more than a day's worth), and 24 teaspoons of (mostly) added sugar, according to CSPI, which tallies the worst meals each year. CSPI noted that "to put that load of sugar into context, the American Heart Association recommends a daily limit of nine teaspoons of added sugar for men and six for women." 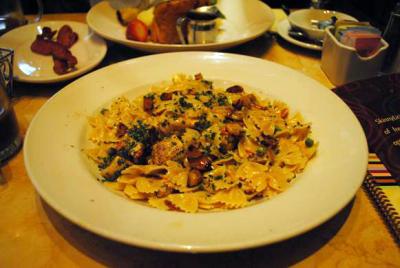 The Cheesecake Factory's Farfalle with Chicken and Roasted Garlic packs a three-day load of saturated fat.

The consumer advocacy group this year has put into perspective how much time would need to be spent burning off some of the biggest offenders on the list, including the Cheesecake Factory's Reese's Peanut Butter Chocolate Cake Cheesecake -- which has 1,500 calories and would "take four-and-a-half hours of aerobics to burn off." according to the press release. The third offender from the Cheesecake Factory is the Farfalle with Chicken and Roasted Garlic. According to CSPI, "the pasta's 2,410 calories and 63 grams of saturated fat (a three-day load) are what you'd get in five single-serve packages of Stouffer's frozen Classics Chicken Fettuccini Alfredo, each topped with a pat of butter."

Other offending chains include Red Robin, which the group blasted for its offering of bottomless steak fries and "Monster" burger, which contained up to 1,670-calories for the burger and 370 calories for the fries.

The list has in the past forced at least one company to respond and reformulate its offerings. Last year, Long John Silver's found itself atop the list of worst offenders for its "Big Catch" dish, which CSPI said had a staggering 33 grams of trans fat. Following that publicity, Long John Silver's in August said it would eliminate trans fat by the end of 2013. Long John Silver's products were not among the nine worst meals this year.

In its defense, The Cheesecake Factory said that it offers a variety of choices for various food preferences, and that often customers share dishes. "With more than 200 menu items, the Cheesecake Factory has always been about choices," said Alethea Rowe, senior director of Public Relations, in a statement. "Many of our guests come in and want to celebrate and not be concerned with calories. Others want to share their dish -- and we love it when guests share -- that's a great sign that our portions are generous. And a large percentage of our guests take home leftovers for lunch the next day." She added that the chain does indeed offer lighter dishes from its SkinnyLicious menu, which offers 50 items under 590 calories.

CSPI also took Cheesecake Factory to task for reformulating some dishes, but still offering what it considers extreme items. The group noted that Cheesecake Factory founder and chief executive officer David M. Overton told the Wall Street Journal that he was "sick of winning" the Xtreme Eating Awards prize. "Mr. Overton may be tiring of the prize, but he's certainly making sure that The Cheesecake Factory remains the most calorically extreme chain that we've seen," said CSPI dietitian Paige Einstein.

For now, many of these calorie counts aren't readily available at restaurants nationwide, though that could change. Healthcare reform legislation signed in 2010 would require chains with more than 20 outlets disclose calorie counts on menus. The menu labeling regulations are still being finalized by the Food and Drug Administration and the White House, and it's not clear when they will be confirmed.