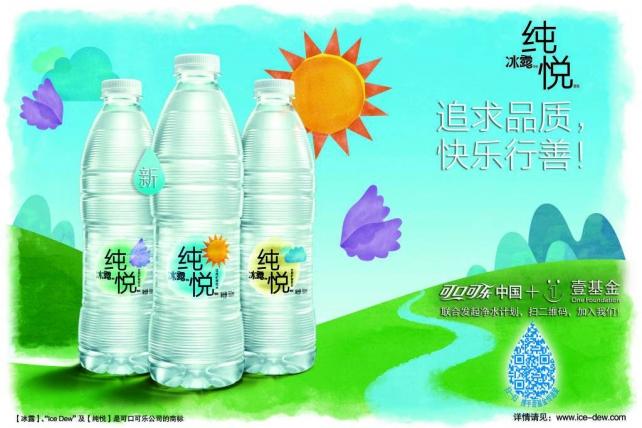 Coca-Cola is launching a socially responsible bottled-water brand in China that will fund projects to bring clean drinking water to schoolchildren in rural China. It's Coke's first initiative of its kind in any market.

The brand targets Chinese millennials because they're concerned about societal issues and share their views on social media. For the work in rural areas, Coke paired with prominent local NGO One Foundation.

Socially conscious brands are not as present in China as in some other markets. Coke saw an opening to do something innovative, especially since the water category is "pretty generic" in China, said Pratik Thakar, Coke's VP-Asia Pacific for creative and content excellence.

"This is the right category because water impacts everyone -- you can sell it as a commodity, like 'Water is water, at the end of day,' or you can say, 'Water is so precious, some people call it transparent gold,'" he said.

While bottled water may be seen as an eco-unfriendly luxury in the United States, people in China increasingly view it as a necessity for their health because water pollution is constantly in the news.

This month, investigators said China's largest oil company was likely behind a leak that contaminated the tap water of 2.4 million people in northwest China. And last year, 16,000 dead pigs were found floating in the Huangpu River, which supplies drinking water to Shanghai.

That's one reason why the bottled water category is growing so fast in China -- sales by volume increased 86% from 2008 to 2013, according to Euromonitor International. The Chinese bottled-water market now is close to that of the U.S. by volume, and it has room to reach more consumers in a market of 1.3 billion.

Coke already sells a water product called Ice Dew in China. It had a 6% share of the market in 2013 and was the No. 5 brand in China, behind several local brands, Euromonitor said.

While Coke has initiatives in many markets to make soda and water bottles more sustainable, this is the first created specifically with the goal of charitably helping communities. The entire brand is designed around a cause. The new brand's slogan is "Drink Good, Do Good, Feel Good."

Coke's concept is bringing clean drinking water to schoolchildren in rural villages where droughts are common, or where people have to walk long distances to reach a water supply. The company says more than 50 schools are already being supplied, and it plans constant expansion.

The brand is targeting Chinese millennials because they're more vocal about social and environmental issues than previous generations, Mr. Thakar said.

They're "proud of being part of solving social issues -- they may not be very active, maybe not going out and planting trees and hugging trees and those kinds of things, but they see pollution and other issues and immediately chat about them on Weibo," he said.

The brand will also involve a wearable tech component in several months, but Coke is keeping quiet on details for now.

Coke partnered with BBH China for the TV commercial and local agency Amber Communications for the digital component. Innovation and design firm Ideo created the bottles. The labels feature three different visuals – a butterfly, a cloud and a sun. The product is being launched in 12 provinces before rolling out nationwide.

Could similar projects work in other markets?

"Let's not get ahead of ourselves," said Kinyi Choo, Coke's general manager for the greater China hydration category. Because of the market's scale, "if it works in China then the opportunity is fantastic. First we have to make it work in China. But we're confident about that."