A Drink After Work Isn't Necessarily Everyone's Cup of Tea

It's not unusual for an ad copywriter to bang out a novel in his spare time. It's far less common to see him wrestle with personal demons in public.

Peter Rosch, a creative who has worked for agencies such as BBH and Lowe , is a recovering alcoholic whose protagonist in his first novel, "My Dead Friend Sarah," shares his addiction. The novel, self-published through Amazon Digital Services, is a suspenseful tale of a newly sober blogger who may or may not have killed the target of his obsession.

Mr. Rosch, who recently joined Mullen in Boston as a group creative director, isn't shy about discussing how his struggles with alcoholism have affected his career and his life. With four years of sobriety under his belt, he offers an interesting counterpoint to the "Mad Men"-fueled nostalgia for the three-martini lunch.

Ad Age : Is it difficult to talk about your addiction and recovery so publicly?

Peter Rosch: For the book, maybe. Not for me. If I'm not completely honest about my alcoholism then I don't think my sobriety would work. It's who I am and I'm going to let people know about it. I wasn't sure how much that would come through in the book, but ultimately it does explore the things that I was going through mentally. It was a little scary to put it out into the world, but the response was good. A lot of the mental aspects of alcoholism are things people are going through anyway.

Ad Age : Do you think the ad business encourages too much drinking?

Mr. Rosch: Absolutely. Though I suspect a lot of high-pressure jobs have this work hard/play hard mentality. It's cool if it works. There's very little we do as an industry that doesn't revolve around alcohol. Not just in terms of selling it or portraying it. It's the reward for when you do a great job and it's the reward when something doesn't go an agency's way. Couple New York City lifestyle with advertising and, I'm sure you know this, but there isn't a night when you can't go out drinking. There's always an invitation extended. Neither advertising nor New York City made me an alcoholic. I subscribe to the idea I was born an alcoholic. Being in the business helped me reach my bottom because I was surrounded by it so much. 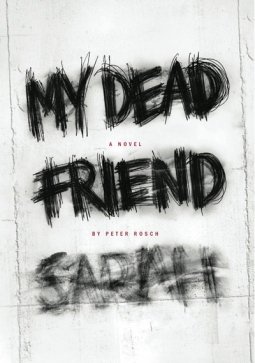 Ad Age : You've mentioned how you were encouraged to have a drink to grease the creative wheels.

Mr. Rosch: For years and years, when someone was stuck, someone else -- or I -- would say, "Well, you guys should just go to a bar." That's what I did all the time. My partner and I would go to a bar and continue concepting. Sometimes it works. But I think it just makes you less judgmental about your own work. It's like beer goggles for content.

Ad Age : Is there much of yourself in the main character?

Mr. Rosch: Seventy-five percent of what he goes through is related to what I went through. How it's portrayed is more fantastical.

Ad Age : Before writing what you've termed "recovery fiction," had you thought about writing a memoir?

Mr. Rosch: I started one, but my feeling is that the market is flooded with memoirs by recovering addicts. As for my own alcoholism: Was I an asshole to a lot of people? Maybe. For the most part, people seemed to think I was a fun drunk.

Ad Age : There's also a pretty high bar now for acting like an asshole because of all those trainwreck memoirs, like Augusten Burroughs' "Dry."

Mr. Rosch: Absolutely. That might be a book I write down the line. I escaped from a hospital and talked my way out of a psych ward once. There are stories from when I was drinking, but I'm not sure they're crazy enough to build a book around. They might be. I'm doing another fiction book now, but maybe I'll do that for my third or fourth book.  It might have been more marketable. Given that I have a name in advertising, it might have sold more books. I don't know.

Ad Age : Does the very boozy "Mad Men" contribute to drinking problems in the industry?

Mr. Rosch: I think the average person who likes that show gets the idea that alcohol can be a big problem. When I started in the "90s, I heard a lot about the daytime drinking in the "80s. Maybe there's a fantasy notion about it.

Ad Age : Should the industry do anything about drinking in its ranks?

Mr. Rosch: I think statistically, one out of every 10 people is an alcoholic. For agencies or companies to go out of their way to nip the problem wouldn't be fair to the nine people who aren't alcoholics. I don't miss drinking, but I don't begrudge anyone for cracking a beer at noon on a nice day if they're sitting outside concepting. All the agencies I worked at were super gracious in offering me help. I was surprised, but I did not take the help I was offered. It's still hard, though. I just started this job and the first thing everyone wants to do is take you out for a drink.

Ad Age : Could you see yourself working for a beer or liquor brand?

Mr. Rosch: Sure. I'd have no problem working on those brands. My wife drinks, my family drinks and the great majority of my closest friends aren't alcoholics.  And even though I don't use it anymore, I think I could still sell it pretty damn good.