Cheat Sheet: Facts and Figures Behind the Faces in Those Car Insurance Ads | Ad Age
Skip to main content

Cheat Sheet: Facts and Figures Behind the Faces in Those Car Insurance Ads

What's Behind the Latest Spots and What Might Be Coming Next?
READ THIS NEXT
10 ways to virtually celebrate Martin Luther King, Jr. this holiday weekend

Flo, Mayhem ... "The World's Greatest Spokesperson"? Can't remember which car insurer those characters pitch for, or which insurer has the catchy (or grating, depending on your point of view) jingle or tagline? Want to know which is the biggest ad spender? This breakdown of the marketing that props up the nation's top nine insurers will clear things up. 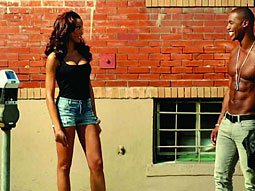 Here's all you need to know about where State Farm is headed: The 89-year-old insurer founded by a retired farmer recently had rock band Weezer cut a version of its iconic "Like a Good Neighbor" jingle, originally written in 1971 by Barry Manilow. You can find it on their "State Farm Nation" Facebook page, launched late last year.

These are among the ideas springing from the Illinois heartland, where State Farm marketers plot their next ad moves in a massive, cubicle-filled headquarters in the city of Bloomington, two hours south of Chicago. The "magic jingle" campaign, launched last year by New York-based Translation, seeks to get younger consumers to realize the importance of the company's 18,000 agents. (The company sells policies online, in person and by phone but still assigns every customer an agent.) Ads feature agents who magically appear when summoned by young drivers and apartment dwellers who need insurance help, including one spot with LeBron James that debuted Saturday.

Meanwhile, the company plans to revamp a separate TV campaign launched about a year ago by DraftFCB that instructs users to visit a special website to check for discounts of up to 40%. The new effort, to be led by roster agency DDB, will put less of a focus on discounts and more on the company's multiple insurance lines, including homeowners and life -- partly an appeal to millennials, who will need more products as they age. "This campaign will evolve to a bigger message to cover all the needs a customer may have," said Pam El, VP-marketing. The insurer spent $300 million on its auto business in the 11 months of 2010, up from the $174 million it spent in all of 2009, according to estimates from Kantar Media.

Allstate, based in suburban Chicago, is moving full-speed ahead on its "Mayhem" campaign. "It's working. If you look at our quotes and our new business, it's way up," President-CEO Thomas Wilson said on a recent earnings call. Mayhem even has a cousin -- a character named "Mala Suerte" (bad luck) aimed at Hispanic consumers. And the insurer is still running ads with longtime pitchman Dennis Haysbert, who offers a trusted voice.

Still, Allstate continues to lose market share. It dropped to 9.96% in third quarter 2010, according to the Insurance Information Institute. Analysts pin some of the blame on rate increases in some big states to improve profitability, especially in homeowners, which could have a spillover effect into auto for those who bundle insurance. Allstate spent $202 million in measured media in the first 11 months of 2010 on auto, up from $178 million for full year 2009, according to Kantar. 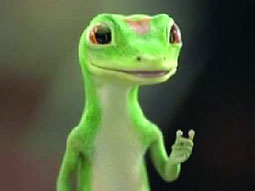 Geico, the category's biggest ad spender, is watching its competitors closely but "we think our approach ... will eventually win out," said CMO Ted Ward. That approach, in a nutshell, is positioning insurance as a commodity-like product where price trumps all. The company, based just outside Washington, runs multiple campaigns by Martin Agency -- with the gecko as the centerpiece to keep people's attention as it spreads a very simple message that "15 minutes can save you 15% or more."

And it's working: From 1999 to 2009, Geico more than doubled its market share to 8.21%, according to the Insurance Information Institute, and its share is growing more this year to 8.29% through third quarter. In the first 11 months of 2010, Geico spent $535 million on measured media on its auto-insurance business, outpacing 2009's total of $477 million and double what it spent in 2006, according to Kantar Media. 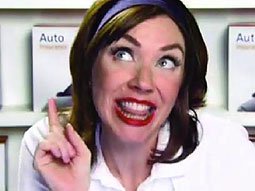 Progressive , based in a Cleveland suburb, has made similar market gains, jumping from 4.7% in 1999 to 7.6% in third quarter 2010. Much of the credit goes to Flo. She is the star of the "Superstore" campaign, by agency-of-record Arnold Worldwide, Boston, which is meant to turn insurance into something "you can touch and feel," said Jeff Charney, chief marketing officer for Progressive .

While Flo is designed to close the deal with consumers who are already in the market, Progressive 's new character, called the Messenger, is meant to get more people thinking about insurance. In ads, the mustachioed, leather-jacket-wearing man lurks in places -- such as a mattress store -- where he sneaks up on customers, pitching them on discounts. "Flo helps when you shop, he reminds you that you should shop," Mr. Charney said. For 2010, measured media spending on auto through November was $364 million, up from $291 million in full-year 2009. 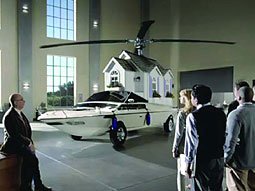 Los Angles-based Farmers is seeking attention by going back to school. The "We Are Farmers" campaign, launched in September by Santa Monica, Calif., indie shop RPA, is set in a fictional university, modeled after the real-life University of Farmers employee-training program. A character named "Professor Burke" guides agents though over-the-top scenarios meant to sell the insurers multiple insurance lines, such as one ad showing a jet ski caught in a tree. The effort replaces the touchy-feely "True Stories" campaign by Farmers' former agency, Richards Group, which showcased real customers.

The ads tested well, but "in the living room it just wasn't cutting through," said Chief Marketing Officer Kevin Kelso. "We needed something that was a little bit more entertaining." 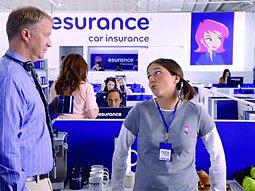 San Francisco-based Esurance launched in 1999 during the dot-com boom as an online play and is now working to broaden its message. The animated pink-haired "Erin Esurance" has been sidelined in favor of "The Saver," an actor who plays a customer-service agent who reminds consumers they can talk to "people when you want them." The campaign is by Duncan/Channon, San Francisco. "The internet-shopping population had moved very mass market ... we wanted to more appropriately direct our messaging," said CMO John Swigart.

Esurance, which commands less than 1% of the market, through November of 2010 spent an astounding $80.9 million on measured media on auto, according to Kantar Media. 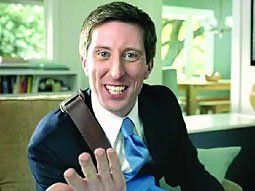 Columbus, Ohio-based Nationwide Insurance has also introduced a character, a pitchman called the "The World's Greatest Spokesperson in the World," who in one ad stars alongside zookeeper Jack Hanna and three parrots. The spokesperson is "an icon that represents Nationwide and being an advocate for the consumer ... showing how we can help them in their everyday life," said Jennifer Hanley, senior VP-marketing for the insurer, which has 3,300 agents and 5,200 storefronts. Nationwide's agency is indie shop McKinney, Durham, N.C. The insurer spent $49 million in measured media on auto in the first 11 months of 2011, compared with $52.9 million for full year 2009, according to Kantar. 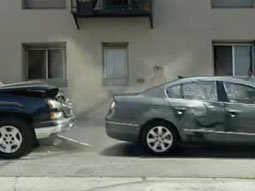 With so many light-hearted campaigns running, some insurers think the way to break through is to get serious. Liberty Mutual, of Boston, touts car-replacement coverage in an ad by Hill Holliday, Boston, where a car is rear-ended, shattered and then magically put back together as somber piano music plays. Consumers "want more than a chuckle when they see an ad," said Greg Gordon, senior VP-consumer marketing for the insurer, whose measured media spending on auto has jumped from $35 million in 2009 to nearly $50 million through November 2010, according to Kantar. 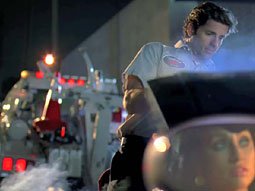 American Family Insurance, of Madison, Wis., is touting emergency roadside service in an ad where a young woman runs into car trouble only to be bailed out by a friendly tow-truck driver. The insurer and agency of record Ogilvy & Mather, Chicago, are prepping a new TV campaign set for debut in the spring that will be more "breakthrough," said Telisa Yancy, the insurer's director-advertising.

But don't look for any cartoonish characters. The insurer would rather avoid such over-the-top appeals, which Ms. Yancy called the "white ocean with a lot of activity and a lot of blood in the water." According to estimates from Kantar, the insurer spent $7 million on measured media on auto in the first 11 months of 2010, about what it spent in 2009.