Morgan Spurlock takes on Big Poultry with a new film and pop-up restaurant, and NFL ratings are up: Friday Wake-Up Call

Plus, Google retools algorithm to favor original reporting
READ THIS NEXT
Parler reappears with help from Russian-owned security service 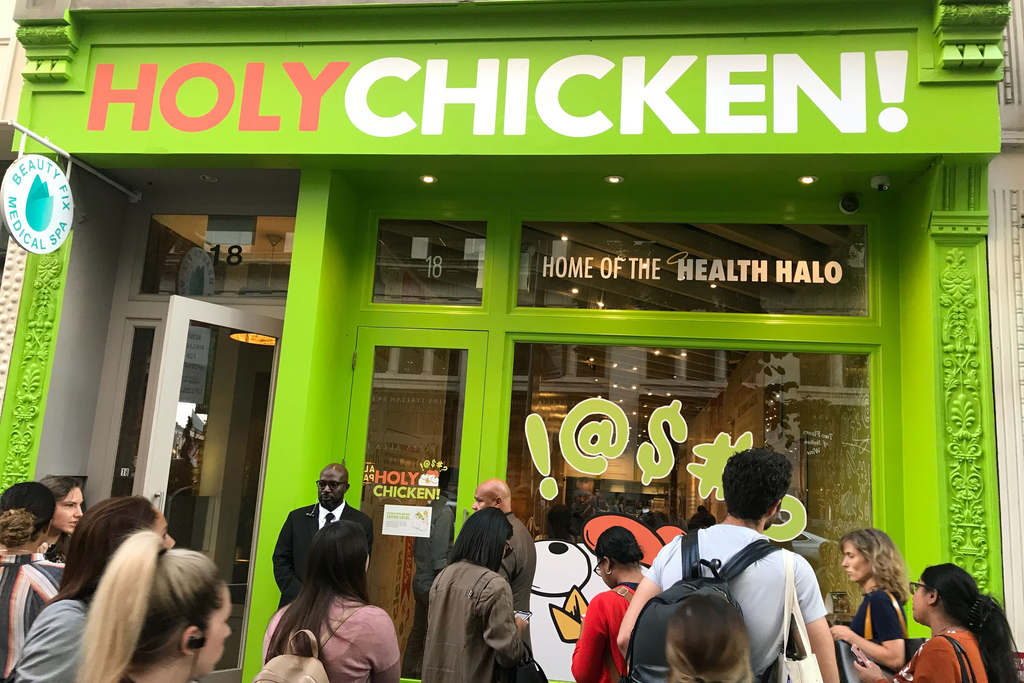 The "Holy Chicken!" outlet, open until Sept. 22 in the Flatiron district, sells a $9.75 crispy chicken sandwich, but the point is to stand out from the rest of the industry by being honest about how food is grown and sold. “I want it to be a center for food advocacy,” he told Liffreing in an interview conducted in one of the booths at the pop-up at 18 West 23 St. “We’ll make you see things a little differently.”

That certainly sounds like the case: Liffreing reports that "the entire pop-up takes jabs at the restaurant industry and its marketing," with cartoon chickens lining the walls and and tongue-in-cheek signs calling out health facts and ways restaurants try to manipulate people. There’s even a sign comparing the real chicken sandwich the restaurant sells you to the one the marketing department uses for a photo shoot.

NFL ratings are up
The NFL has enjoyed a strong start to its 100th season, reports Ad Age's Anthony Crupi in this week's Sports Media Brief, in spite of recent controversies.

Ratings for the seven blended NFL TV windows are up 5 percent year-over-year, according to Nielsen, while games had an average draw of 17.1 million viewers and a 9.9 household rating. While the top draw was the Fox “America’s Game of the Week” showcase, the Sunday night and Thursday Kickoff Game primetime broadcasts averaged 22.2 million viewers and a 12.8 rating, good for an 8 percent year-over-year lift.

As Crupi notes: “This is a particularly remarkable achievement, given the ongoing erosion in broadcast prime and the fact that sooooooo many fans have boycotted the NFL forever because some players expressed ambivalence re: being shot by police. Go figure.”

Google highlights original reporting
Google is making it easier to see which publication originally broke a story, by making changes to its search algorithm to give an advantage to “original reporting,” reports the New York Times.

Richard Gingras, Google’s vice president of news, announced in a blog post that changes to the company’s search guidelines would help it “better recognize original reporting” and make it more visible on the internet.

While this is undoubtedly good news for hard-working media outlets, it will also benefit Google, says the Times, as it tries to win the trust of readers in the face of questions over big tech's influence on digital news. The move comes as Facebook is also reportedly working with publishers to launch its “News” tab.

Bring-your-own bun: Popeye’s is still milking its chicken-sandwich shortage for all it is worth, this time with a jokey video inviting customers to make their own. As Ad Age’s Jessica Wohl writes, the video, by GSD&M, suggests diners buy three chicken tenders and put them on a bun from home. However, there’s still no official word on when the actual sandwich will return to the menu.

'Unacceptable': The chief executives of nearly 150 companies including Uber, Twitter and Levi Strauss have written a letter to Senate leaders urgently calling on them to address gun violence, reports the New York Times. “Doing nothing about America’s gun violence crisis is simply unacceptable and it is time to stand with the American public on gun safety,” it says.

Cleaning up: "Truman’s, a direct-to-consumer startup that makes concentrated hard-surface cleaning products, has raised a $5 million minority investment led by German consumer-products giant Henkel," writes Ad Age’s Jack Neff. The cleaning product is designed to be more environmentally friendly than competing products, as it can be refilled by plugging a cartridge into a reusable bottle and adding water.

D-to-c takeaways: Earlier this week, Ad Age's Next series brought together leaders from the direct-to-consumer world to discuss the growing sector. Lindsay Rittenhouse compiled a helpful roundup of lessons from the speakers, who included execs from companies including Allbirds, Boll & Branch, Viacom and Mars Petcare.

Campaign of the Day: BMW found a creative way to get its latest models in front of wealthy buyers in Canada: stage them in the driveways of expensive retail listings. The brand’s agency FCB Canada teamed up with real estate firm Heaps Estrin to park them outside million-dollar properties, writes Ad Age's I-Hsien Sherwood. Potential homebuyers can see them both on digital home listings and at open-house events. We can’t help thinking that plenty of other brands could muscle in on this new product placement opportunity, both inside and outside the properties.