Howard Schultz for president? Plus, Coke vs. Pepsi at the Super Bowl: Monday Wake-Up Call

Starbucks' former CEO says he might run for the presidency as an independent
READ THIS NEXT
Apple's marketing head Phil Schiller steps aside, to be replaced by Greg Joswiak 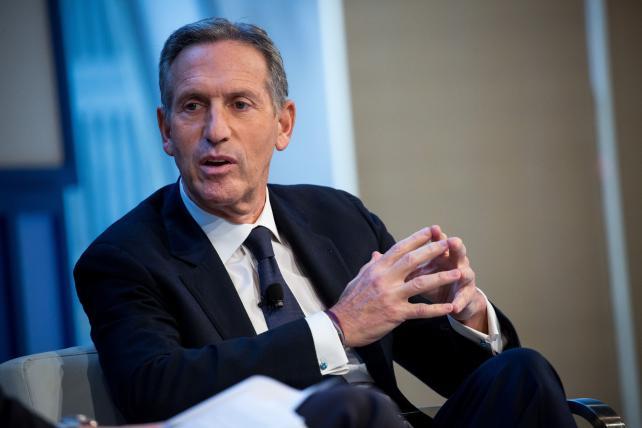 What people are talking about today
Howard Schultz, the former CEO of Starbucks and a self-described "lifelong Democrat," announced that he's considering a run for the presidency in 2020, as a centrist independent. "Our two parties are more divided than ever," he tweeted. "Let's discuss how we can come together to create opportunities for more people."

CBS's "60 Minutes" asked Schultz whether Starbucks would play a role in his potential campaign, with "a 'Schultz 2020' button on every green apron across the country." Schultz's response: "No. There would be a complete separation between me and the company."

Backlash: Democrats criticized Schultz's move, predicting that his potential candidacy would divert votes away from the left and help keep President Trump in power. Some people lashed out at Starbucks. Neera Tanden, the president of the Center for American Progress and a former adviser to Hillary Clinton and Barack Obama, tweeted: "Vanity projects that help destroy democracy are disgusting. If he enters the race, I will start a Starbucks boycott because I'm not giving a penny that will end up in the election coffers of a guy who will help Trump win."

A dose of comic relief: One Twitter user predicts that Schultz will "open up too many campaign offices, some right across the street from one another."

Coke vs. Pepsi
On Super Bowl Sunday, the New England Patriots play the Los Angeles Rams, and Pepsi goes up against rival Coke. Coca-Cola's headquarters is in Atlanta, site of Sunday's game, and Coke is running an animated ad on CBS before the national anthem. But PepsiCo is the official NFL sponsor, its namesake beverage has its name on the halftime show, and it hired Steve Carell, Cardi B and Lil Jon to star in a Pepsi ad during the game. It's also trolling Coke with billboards around town ("Pepsi in Atlanta. How refreshing.")

So what will people actually drink inside the stadium? That's where things get really convoluted. Ad Age's E.J. Schultz writes:

"Coke has the beverage pouring rights inside Mercedes-Benz Stadium, where the game will be played. But because of Pepsi's NFL status, Coke poured during the game will be carried in Super Bowl-labeled cups without Coke branding, the Atlanta Journal Constitution recently reported. Also, while Coca-Cola's Dasani bottled water is available, labels will be stripped off, the newspaper reports."

Nostalgia: Check out the Ad Age Super Bowl ad archive to watch Pepsi's classic 1995 spot about its rivalry with Coke. A Coke delivery driver and a Pepsi driver walk into a diner. Spoiler: Things don't end well.
Also: Our full list of all the Super Bowl ads we know about so far is here.

The original 'influencer'
And now let us ponder the most perplexingly off-brand tweet of 2019 so far. The Twitter account of Pope Francis, @Pontifex, referred to Mary, mother of Jesus, as "the most influential woman in history. Without social networks, she became the first 'influencer': the 'influencer' of God."

Yes, that really happened. And the pope said something similar during a World Youth Day speech in Panama City this weekend. HuffPost has a roundup of the incredulous responses from social media users. (Such as: "And so it was said in the book of Snapchaticus 4:20.")

The show must go on (sort of): Fox's "live" production of the musical "Rent" on Sunday wound up using mostly pre-recorded footage. Actor Brennin Hunt broke his foot one day before the show, and Fox ran mostly footage from the dress rehearsal, Variety reports.

Alarm bells: In Florida, "a fisherman found a World War II hand grenade on Saturday and drove to a Taco Bell before calling authorities," The Orlando Sentinel reports. The restaurant was evacuated, and the grenade was disposed of safely.

Ad of the day: Marie Kondo's Netflix series is inspiring a whole lot of people to declutter their homes. Meanwhile, it inspired Ikea to try to sell us more stuff. Ad Age's Ann-Christine Diaz writes that a post on the company's Singapore Facebook page advertises storage boxes to stash what still gives us "joy." There's also a garbage can for for the junk we want to toss "after, presumably, performing the Kondo-prescribed practice of saying 'thank you,'" Diaz writes. Check it out here.