Few people would suspect that what's inside an unmarked building some 30 miles north of New York could change the way consumers view a soda brand, even the entire cola category. But that's what Pepsi's ambitious, high-energy marketers are promising.

This unassuming office park houses the Beverage Lab, and inside are the results of months of intense research. Pepsi execs have been working to chart a new course for a brand that has endured an embarrassing slip to the No. 3 soda, just behind Diet Coke. 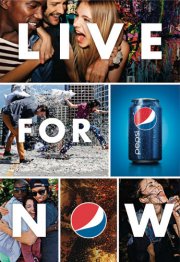 Pepsi 'Live for Now' campaign
Over several weeks early this year, Brad Jakeman, president-global enjoyment and chief creative officer, has walked key Pepsi constituents around the lab, talking about ideas and showing off mock-ups of new vending and fountain machines, samples of licensed products and new marketing concepts. It's a world where Pepsi specifically -- and the cola category generally -- is cool again.

He insists it's not a pipe dream, despite the facts: Blue-can Pepsi had slides of 0.3% in market share and 4.8% in volume last year, and the carbonated-soft-drink category has been declining for seven straight years, according to Beverage Digest.

"The category is in decline in this country, but it's growing in a significant number of our markets," Mr. Jakeman said. "It lost the cool quotient. If there's any brand that can inspire the category again, it's Pepsi."

In March, Ad Age was invited to the space, where the company had erected a temporary "Pepsi Experience." For nearly two hours, Mr. Jakeman screened internal presentations, detailed months of consumer research and candidly discussed where the brand has excelled and where it's fallen short. He laid out a road map for returning Pepsi to pop-culture relevance, growing sales, creating a cohesive design system and invigorating employees. And he explained precisely what makes Pepsi different from Coke, distinctions that for many were visceral but not easily articulated.

Mr. Jakeman was in high spirits, having received positive feedback on his plans from all corners of the company.

"I have always aspired to have this brand in my custodianship for a period of my career," Mr. Jakeman said, sharing his longtime routine of drinking a Pepsi or Diet Pepsi in the morning, followed by a Diet Mtn Dew in the afternoon.

"While we might not be the leading cola, we have always behaved like we were. This is a brand that, when it's at its best, has the confidence and swagger of a leader," he said. "Our least-impactful marketing has been when we've tried to reinvent this brand. This brand does not need to be reinvented. It needs to be reignited."

It's clear that the dapper Australian has immersed himself. Mr. Jakeman concedes he has probably annoyed his team by insisting they repeatedly watch historical reels of Pepsi advertising. He flashes a snapshot of himself, grinning in a Pepsi T-shirt next to a sign in the brand's birthplace of New Bern, N.C. Commemorating Pepsi's inventor, Caleb Bradham, the sign notes that Pepsi-Cola was originally marketed as "Brad's Drink."

"It was quite prophetic," Mr. Jakeman said, drawing the connection between Pepsi's original name and his first name. "I thought it was all meant to be."

Mr. Jakeman joined PepsiCo less than a year ago, when conversations about the brand's first global campaign were already in full swing. "I thought ... we had codified a very cogent point of view on what the brand was going to stand for," he said. "But we hadn't."

So began the "most exhaustive and rigorous consumer-insights-led process" Mr. Jakeman said he had ever been a part of, in a career that spans more than two decades at Activision Blizzard, Macy's, Citibank and Ogilvy & Mather. It was also the first instance since the mid-1990s that Pepsi execs had spent a significant amount of time with consumers around the globe, said Simon Lowden, CMO-PepsiCo Americas Beverages and former head of Pepsi International marketing.

Newcomer Mr. Jakeman and British company veteran Mr. Lowden -- insiders describe them as "dynamic" and a "yin-yang team" -- began discussing Pepsi's positioning, which they believed should drive advertising and design strategy, and in turn fuel innovation and consumer engagement. For Starbucks, the positioning statement is "Moments of Connection"; for Nike, "If you have a body, you're an athlete."

Those brands have a clear sense of what they are, who their consumers are and their role in consumers' lives, according to Mr. Jakeman. "Pepsi has never really had that," he said. "As a brand we have moved from one advertising campaign to another to another. We need to get a lot more disciplined. Because we haven't had an enduring piece of brand language, we just attached different things to the logo all the time."

Taglines have varied widely even in just the past few years. From "Every Pepsi Refreshes the World" to "Summer Time is Pepsi Time" to "Where There's Pepsi, There's Music."

"Between "Refresh' and now there were some good stop-gap measures," said John Sicher, editor and publisher of Beverage Digest. "But brand Pepsi legitimately needs a big, integrated campaign that can run for several years, and PepsiCo has not given it that," he added. "For some years now the bottlers have been looking to PepsiCo to get behind this brand in a big and muscular way, and its clear PepsiCo is doing that now."

Jeff Minges, chairman-CEO of the independent Minges Bottling Group, hosted Messrs. Jakeman and Lowden when they visited New Bern last July. He said he believes PepsiCo is now displaying the "moxie" of a truly global company. "They've listened to where the bottlers want to put emphasis and realized the Pepsi trademark can still be vibrant and relevant," he said.

For nine months, a core team of Pepsi execs, including Messrs. Jakeman and Lowden, scoured the globe for inspiration, looked to the past for insights and sought to understand what precisely made Pepsi different from Coke. There were exhaustive focus groups, in-home ethnographies, quantitative and qualitative studies, and cultural immersions in markets as diverse as Argentina, Australia, United Arab Emirates and Russia. Mr. Jakeman quipped his frequent-flier status is the best it's been in years.

"The Pepsi user is psychographically very similar across the world, so if there is a brand that needed a consistent global positioning, it's Pepsi," said Deepika Warrier, PepsiCo's VP-marketing India Beverages. She noted that the global marketing teams, herself included, have had input throughout the process.

Though the execs took cues from the past -- "understanding our famous past is important in rewriting a more famous future," Mr. Jakeman said -- they were also keen to better understand their longtime rival. Mr. Jakeman summarized months of research with the simple statement: Coke is timeless. Pepsi is timely.

"Brands that are timeless want to have museums," Mr. Jakeman said, referring to the World of Coca-Cola attraction. "Pepsi is not a brand that belongs in a museum."

Those insights led Pepsi to embrace a brand positioning to "capture the excitement of now," and the campaign that has been developed carries the tagline, "Live for Now." It's already proved a potent rallying cry.

"There are a lot of ghosts on Pepsi," said Rob Schwartz, chief creative officer at TBWA/Chiat/Day, which collaborated with BBDO on the effort. People "want to go back to this moment in the 1980s," he said. "But brands need to evolve, take what was part of the DNA and make it modern and relevant. Between timeless and timely -- that unlocked so many creative doors."

That concept of being timely, of "capturing the excitement of now," will also inform the brand's design efforts, which have been dissected a lot in recent years. After Pepsi's 2008 logo redesign, meant to evoke a smile, a graphic tracking Pepsi and Coke logos over the years made the rounds on the internet. The joke? Pepsi has had 11 since 1898, while Coke's logo was unchanged since 1886.

Coke's logo has actually undergone changes, but the giant has largely stuck to its brand equities: the color red and a scripted font. By contrast, little has been sacred at Pepsi. It's not unusual to see soda cans with the latest logo being unloaded from a truck bearing an outdated one. And major countries, including China, India and Russia, use different logos than the U.S.

"It's not as tidy as we're trained to believe" it should be, Mr. Jakeman said. "But the bigger question is "Does it bother consumers?' I haven't seen any evidence that it does."

Mr. Jakeman cited MTV, Starbucks and Google as brands that regularly fiddle with their logo size, design and color. The difference between them and Pepsi is that those brands have operated within a system of "strategic variance," he said, the type he hopes to create at Pepsi in the coming months.

Pepsi won't be changing its logo, though markets such as China will be updating to unify the brand. Instead, it is building on brand equities. For example: the idea of red and blue divided by white -- imagine a guitar or the Statue of Liberty swathed in red, white and blue mimicking Pepsi's logo.

"When you change the logo all the time ... one thing is automatically made redundant by the other thing," Mr. Jakeman said. "With this system each new thing is just different, not new or old."

News of the "Live for Now" campaign began to spread last week, and the first spot, featuring a cameo from performer Nicki Minaj, is set to be released May 7. Pepsi Pulse, a company-curated "dashboard of pop culture" ranking tweets, photos and news items from the entertainment world, has replaced Pepsi.com. There's already a feeling among those close to the brand that something big is happening.

The positioning and campaign signal a shift, as Pepsi returns to leading consumers rather than tapping into trends, according to Ms. Warrier. "We will need to invest in capability, in foresights and dynamic trend-spotting, design and creating social communities," she said.

"The new positioning injects new energy into not only the brand but the people who work on it," giving them a license to experiment with "exciting new initiatives," said Richard Lee, CMO-PepsiCo China. "Who doesn't want to work on a brand that promises to capture the excitement of now?"

Mr. Minges, a third-generation Pepsi bottler, knows better than most what it takes to make Pepsi great. He came of age in the business when Alan Pottasch, legendary marketer and father of the "Pepsi Generation," was at the helm. And he's clearly optimistic about the next generation of leadership.

"These two men have created something special," he said of Messrs. Jakeman and Lowden. "They're taking Pepsi to another level. When you look back at those campaigns from the '70s, '80s, even the early '90s, they were all tied to music and entertainment. [Live for Now] is bringing back the roots of what Pepsi is all about."