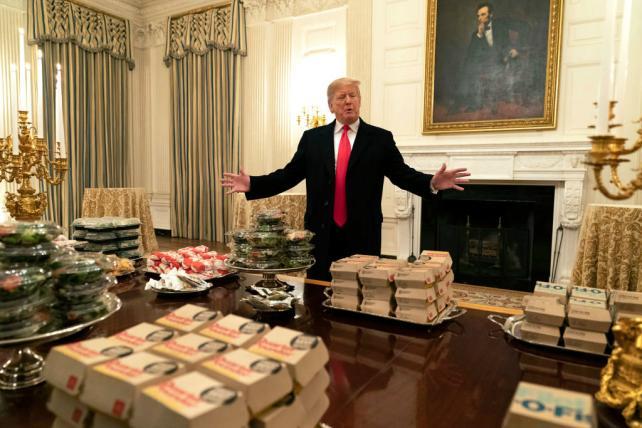 What people are talking about today
President Trump, a fast-food aficionado, served up Wendy's, McDonald's and Burger King at the White House as he congratulated the Clemson Tigers for their football championship. With chefs furloughed during the government shutdown, the White House ordered takeout, and Trump said he paid for it himself. While staff lit candelabra, Trump presided over stacks of 300 burgers arranged on platters.

"What's your favorite thing here, Mr. President?" someone asked, according to video tweeted by a Yahoo News reporter. "I like it all," he responded, calling it "great American food." The reporter followed up: "Do you prefer McDonald's or Wendy's?" Trump responded: "I like them all. If it's American I like it." Photos from the event blew up on social media, but as of this writing, neither McDonald's, Wendy's nor Burger King had anything to say about it on their social channels.

'Absurd virtue-signalling PC guff'?
Procter & Gamble's new #MeToo-themed ad for Gillette razors provoked strong reactions, with some people saying it made them tear up, and many, many others panning it as preachy or insulting to men. The ad from Grey "tackles bullying, sexism and #MeToo, laying responsibility on men to be better," Ad Age's Jack Neff writes.

Online, the reaction to the ad was swift. "You're a razor merchant, not an activist. Stay in your lane," someone wrote on YouTube, where the video had about 10 times as many thumbs down as thumbs up. On Twitter, another person called it "man-hating liberal propaganda bullshit," and Piers Morgan decried it as "absurd virtue-signalling PC guff." The ad has supporters too; one tweeted that it's "a brave amazing ad that goes there. If you doubt the need, just read the endless hateful, angry comments by men who feel the commercial's message has no merit."

Streaming wars
Walt Disney and AT&T's WarnerMedia are working on direct-to-consumer video services, and now NBC Universal says it's launching one early next year. NBCU says it will be offered for free to paying cable and satellite subscribers, reports Ad Age's Jeanine Poggi. It will be ad-supported: "Advertising continues to be a major part of the entertainment ecosystem and we believe that a streaming service, with limited and personalized ads, will provide a great consumer experience," NBCU CEO Steve Burke said in a statement. Those who prefer an ad-free service can pay for that experience. There's no word on what the new service will be called, but hopefully execs will come up with something more memorable than the bland moniker for Disney's forthcoming service, "Disney+."

Just briefly:
Super Bowl: Hyundai revealed Jason Bateman will star in its Super Bowl spot, Ad Age's E.J. Schultz writes. But where are all the other celebs? So far, we don't know of many who are starring in commercials to air on Feb. 3, reports Jeanine Poggi in her Super Bowl newsletter. (Sign up for the newsletter here.)

Back to the drawing board: "JC Penney is on the hunt for another top marketer, its third in four years," Adrianne Pasquarelli writes in Ad Age. Marci Grebstein, the current CMO, is leaving early next month.

Back in the game: Conan O'Brien's revamped TBS show starts Jan. 22. "What if I tried to, in the most selfish way possible, alter this so that I have a maximum amount of fun?" he told The New York Times.

Unsolved mysteries: "A picture of an egg has become the most liked Instagram post of all time," BuzzFeed News reports. But who is behind the mysterious egg account, which beat Kylie Jenner's record?

Whoops: An Instagram influencer, who has overreached before, tried to organize a "tour" (think: seminar) with a ticket price of $165 to teach people how to be their most authentic selves. And "reader it, uh, did not end well," The Cut writes.

Creativity pick of the day: Chicago's Red Line trains are being temporarily rebranded as the "Blood Line" to encourage blood donations in a city where there's a perpetual shortage, Ad Age's Jessica Wohl writes. There will be donation stations along the train line for the next month, too. It's a pro-bono campaign from We Are Unlimited, and summer interns helped come up with it. Check it out here.