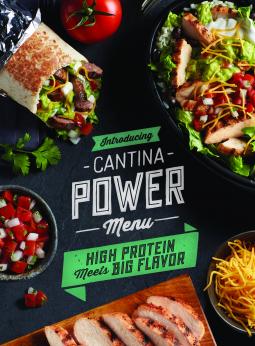 Cantina Power is a combination of the gourmet-positioned Cantina menu with its Power Protein menu, the latter of which was tested last year in Dayton, Ohio. CEO Brian Niccol said that during the test last year, consumers said they didn't see much differentiation between the protein menu and Cantina menu, in part because Cantina already offered three ounces of protein between the black beans and meat. So, he said, Taco Bell decided to combine the two and modify the products by eliminating rice and beans and adding in cheese and sour cream. Cantina Power will replace the original Cantina Menu, which was first unveiled in 2012.

The menu will be available July 17 and will be marketed with digital, social and mobile channels -- where Mr. Niccol said the chain's customers are -- and will eschew TV. The push effort will be handled by Interpublic's Deutsch and Publicis Groupe's DigitasLBi.

The items will be offered at a higher price than much of Taco Bell's standard menu, on par with what the chain charged for its original Cantina menu. The Cantina Power Burrito will cost $3.79 for chicken and $3.99 for steak; the Cantina Power Bowl will be $4.99 for chicken and $5.19 for steak; vegetarian options are also available at $3.79 for the burrito and $4.99 for the bowl. 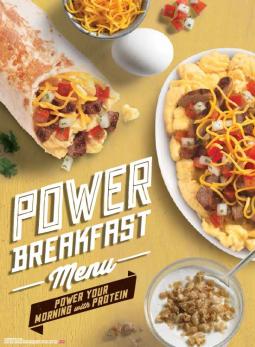 The chain is also testing in Omaha staring August 4 some new breakfast items: a protein-laden steak burrito and bowl and a Power Greek Yogurt, the latter in partnership with small brand Three Happy Cows. Mr. Niccol said the yogurt gives people a portable, healthy, protein-filled option. He added that if it goes well, a national rollout would likely happen in 2015. Taco Bell in March unveiled its national breakfast menu, accompanied by a massive marketing push.

Taco Bell is rolling its Cantina Power menu out as more marketers are touting protein, making it one of the hottest trends in food. Greek yogurt in general has benefitted from its high protein count but other marketers have been jumping in. Kraft rolled out a new brand called P3, which stands for portable protein packs, that offers meat, peanuts and cheese in snack-size packages and Hormel has its high-protein Rev Wraps. The milk industry has also been extolling the vitures of milk thanks to its protein content. Fast-casual chain Panera also sells a Power Breakfast sandwich.

Mr. Niccol said that the move to offer more food perceived as healthy is not a result of bowing to outside pressure, but a response to customer demand. He added that Taco Bell will likely roll out more vegetarian-friendly options.

Taco Bell, he said, has seen consumers balancing some of its more indulgent foods it offers with ones they consider healthier, such as items with more protein and fewer carbs. Offering food perceived as healthier "is not a problem because we're not eliminating the things we're famous for," he said. "We're expanding to fit millennials' palates and lifestyles."

Taco Bell is looking to offer healthier items on a level beyond a protein-heavy platform. Last spring it pledged that it would improve the nutritional profile of some of its food to meet stricter standards, including reducing calories, fat and sodium. At the time, then-CEO Greg Creed said that the chain also planned to be more transparent about its food.

Taco Bell is aiming to have 20% of combo meals meet no more than one-third of the U.S.' daily recommended guidelines, operating on the assumption that most people eat three meals per day. For instance, based on a 2,000 calorie diet recommended by the U.S. Department of Agriculture, Taco Bell would pledge to have 20% of its meal deals contain no more than one-third of that total calorie count, or an estimated 666 calories. Not just calories will be affected -- dietary guidelines for fat, sodium and other ingredients will be taken into consideration.

Taco Bell began reducing sodium in its products in 2009 and 2010, cutting sodium on average 20% across the menu. Taco Bell also has "fresco" options, which are items served without cheese and sour cream, reducing calorie count and fat content. Mr. Creed said that those account for about 2% of Taco Bell's sales.

Some fast-food chains in recent years have been working to distance themselves from the perception that they offer little more than junk food. Burger King in September introduced its lower-calories "Satisfries" and McDonald's in 2011 announced it would revamp its menu by 2020, reducing added sugar, saturated fat and calories through varied portion sizes and reformulations. As part of that initiative, McDonald's said it will reduce sodium an average of 15% across its national menu by 2015.

McDonald's last year rolled out the McWrap this month in the hopes that consumers, particularly millennials, will view the product as fresh. In 2012, McDonald's promoted a "Favorites under 400 Calories" menu during the summer Olympics.