The retailer hopes its new grocery line, Good & Gather, will grow into a multibillion-dollar brand
READ THIS NEXT
Jeff Bezos’s wealth soars to $171.6 billion to top pre-divorce record 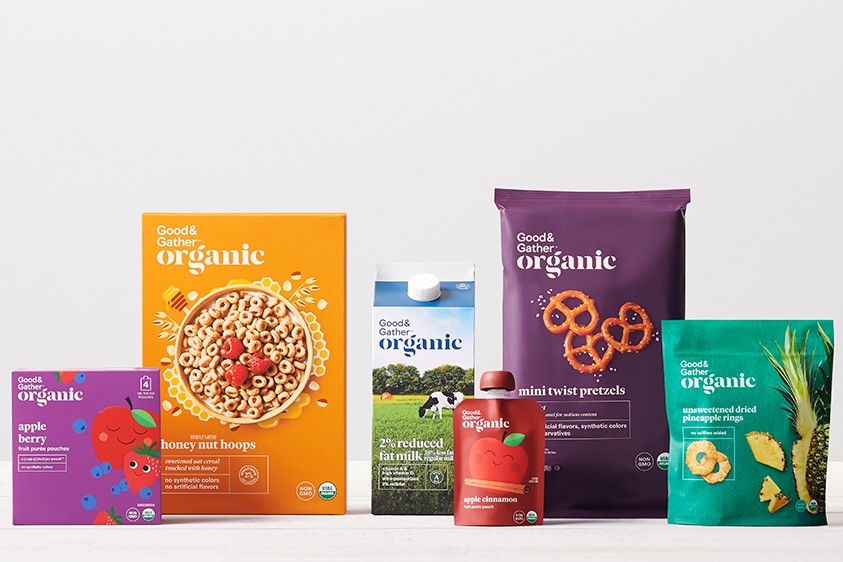 Target’s on-trend food brand
Target has a plan to rev up its uninspiring grocery business: Next month it’s launching a private label food-and-beverage brand called “Good & Gather.” By the end of next year, the company says, there will be more than 2,000 Good & Gather items for sale. The endeavor is very zeitgeisty: The brand won’t use artificial flavors or sweeteners, synthetic colors or high-fructose corn syrup, and it will include “trend-forward products such as avocado toast salad kits and beet hummus alongside everyday staples such as milk, eggs and cheese,” Target says.

As CNBC reports, Target “expects Good & Gather will be a multibillion-dollar brand—and the largest of its private labels.” Two existing Target food brands, Archer Farms and Simply Balanced, will be phased out. This might be a good time to stock up on Archer Farms Peanut Butter Monster Trail Mix, if that’s your kind of thing.

Walmart’s U.S. CMO departs
After about a year on the job, Walmart U.S. Chief Marketing Officer Barbara Messing will step down on Aug. 30. The company is looking for a new CMO, but in the meantime, some of Messing's duties will be handled by former Target and DreamWorks chief marketer Michael Francis. As Ad Age’s Jack Neff writes, “Walmart's marketing department has seen considerable flux since longtime CMO Stephen Quinn left in late 2015. … The new U.S. CMO will be Walmart’s fourth in four years (or possibly fifth, including interim chief marketer Francis).”

That's a lot of CMO churn, even in an industry accustomed to it. Here’s some context from a report out this week: The average CMO tenure last year among 100 of the most-advertised U.S. brands was 43 months, according to executive recruitment firm Spencer Stuart. Another finding of note from the study: Last year, “none of the 18 CMOs hired at the 100 most-advertised brands and companies were minorities,” as E.J. Schultz writes in Ad Age.

Facebook, Twitter and Chinese misinformation
China’s state-run media has been buying ads on Twitter to try to swing global public opinion against pro-democracy protesters in Hong Kong; one ad referred to the protesters as a “public enemy,” and another cast them as violent “thugs," as BuzzFeed News reports. Twitter got flak for allowing that, and now it says it will no longer allow any advertising from state-controlled news sources, from any country.

In another sign of China’s government trying to spread its message on Western social media, Twitter also said it had deleted 936 accounts that originated in China and tried to manipulate public opinion about the Hong Kong demonstrators, Bloomberg News reports. Facebook, acting on a tip from Twitter, also said it had discovered a network of disinformation about the protests. “This is the first significant move against coordinated disinformation from China by Twitter and Facebook,” as Bloomberg News notes. China seems to have learned a few tricks from Russia.

Something new: Twitter has a new method of bidding on ads, “which lets advertisers set a goal of getting viewers to watch for at least 6 seconds,” Ad Age’s Garett Sloane writes. “If a viewer scrolls away from the promoted video before the 6 seconds are up, the advertiser doesn’t pay.”

Big money: When Viacom CEO Bob Bakish takes over the combined ViacomCBS, he will be eligible for $31.5 million in annual compensation, The Hollywood Reporter writes.

Weird news story of the day: “An Influencer Is Defending Her Decision To Post A Photo Shoot Of Her Motorcycle Accident On Instagram,” BuzzFeed News writes. A bottle of Smartwater featured prominently in a photo of the crash site, but influencer Tiffany Mitchell says the shoot was not sponsored.

Podcast of the day: John Dokes, the chief content officer at AccuWeather and president of the AccuWeather TV network, is also a jazz singer. And you can hear him sing a jingle on this week’s “Ad Block” podcast, hosted by Alfred Maskeroni and I-Hsien Sherwood. Subscribe to the podcast on iTunes and Spotify.

Creativity pick of the day: To mark its 60th anniversary, the Clio Awards commissioned an interactive digital mural in the style of a Renaissance painting, and it’s a fun mashup of brand mascots and advertising greats. As Ad Age’s I-Hsien Sherwood reports, David Ogilvy and David Droga are part of the tableau, and so is Fearless Girl, Subservient Chicken and the Kool-Aid Man. The painting is by Brooklyn-based illustrator Sam Spratt and BBDO Los Angeles.