Walmart takes heat for selling pro-gun shirts on its website 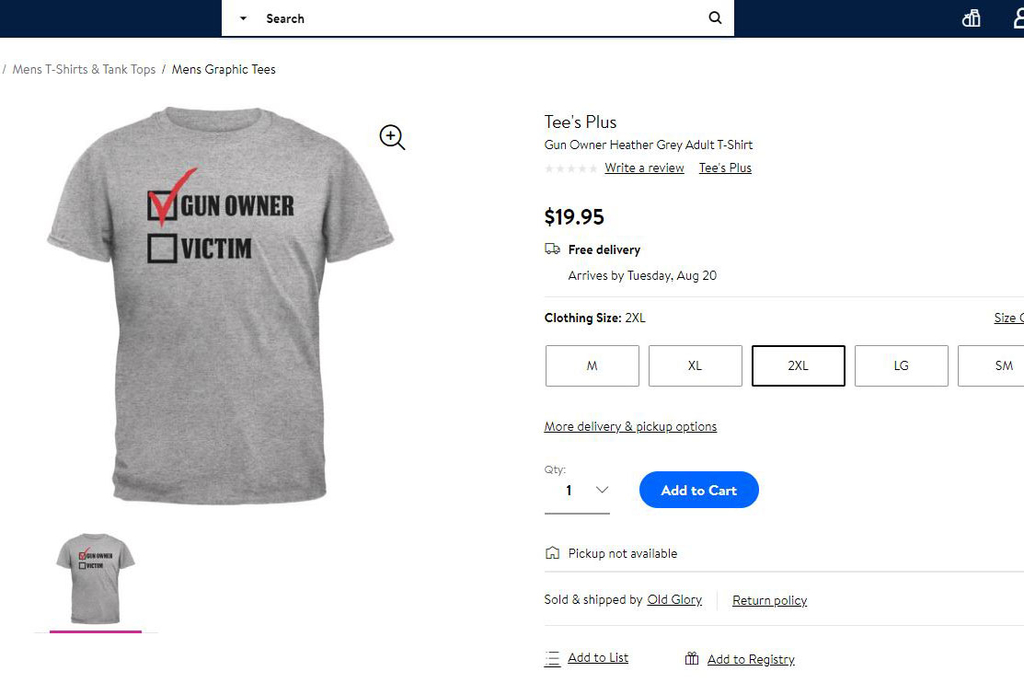 Walmart, already facing pressure for being a major vendor of guns and ammunition in the U.S. after a pair of shootings inside its stores, is feeling renewed heat on social media over a selection of pro-gun T-shirts for sale on its website from third-party vendors.

One shirt, for sale by a vendor called Tee’s Plus, suggests buyers can either be gun owners or victims. Another, offered by third-party seller Old Glory, is emblazoned with a crosshairs reading “gun control is being able to hit your target.”

Commenters on social media were divided on the gun owner shirt. Some called it “disgusting” and “horrifying,” while others argued that “most people in the country completely agree with the sentiment of this shirt.”

As news outlets began to report on the shirts, some of the original listings were removed.

Two people died in a shooting at a Walmart in Mississippi on July 30. More than 40 were shot in an unrelated attack on Aug. 3 at a Walmart store in El Paso, Texas. An additional shooting may have been thwarted Thursday when a gunman wearing body armor was stopped by an armed private citizen outside a Walmart in Springfield, Missouri.

A spokesman for Walmart did not immediately reply to a request for comment. The t-shirts weren’t being sold by Walmart itself, but by outside sellers who can sign up to advertise products on Walmart’s website.

As one of the country’s biggest firearms retailers, Walmart is a frequent target of anti-violence activists. In 2015, the company stopped selling military-style weapons, citing sluggish demand. Last year the company said it would increase the age to purchase firearms and ammunition to 21 years old.

It’s not the first time Walmart has gotten into hot water for controversial t-shirts for sale on its website. The retailer felt heat in 2017 after a third-party seller offered t-shirts that suggested killing journalists. The t-shirts read: “Rope. Tree. Journalist. Some assembly required.” Last year, its website offered t-shirts from third-party sellers with “IMPEACH 45” emblazoned across the front in big capital letters—a call to bring down the 45th U.S. president, Donald Trump.