Opinion: The best kind of identity replacement? Have your own data | Ad Age
Skip to main content
Sign In Register

Opinion: The best kind of identity replacement? Have your own data

If you’re a close follower of the ad industry, it’s likely you’ve been buzzing about several recent world-rocking events: Amazon may be looking to lock up some exclusive NFL rights and Google has declared that it intends to significantly pull back on tracking people for ad targeting purposes.

The Amazon news was perhaps juicier, given the stunning dollar amounts involved and the fact that the NFL remains so dominant on television.

But it was the Google announcement that caused more shock waves, particularly across the ad tech universe, which had been hoping for a signal that the search giant would somehow support one of the various efforts to create a cookie replacement that works for the entire digital publishing world.

While you can spend lots of time analyzing the ramifications of this move—debating its fairness, speculating on motives, grumbling about contradictions—much of the chatter misses the point.

If you put the success or failure of your business in someone else’s hands, you leave yourself at heavy risk; especially if your business is dependent on extracting or leveraging—or in some cases, exploiting—consumers’ data. Whatever you think about how or why Google, regulators, and other powerful entities are making such sweeping decisions, in the end it’s about respecting consumers. That’s something that is often overlooked in the digital ad business and shouldn’t be discounted.

Indeed, it’s clear the tide has shifted dramatically, and things are going in only one direction from here on out.

History of being burned

Meanwhile, there is a long list of companies in our industry alone relying too much on other companies’ prolonged goodwill. How many publishers went all-in on Facebook Live, or Facebook's pivot to video, or a slew of other programs, only to get burned badly when Facebook shifted its priorities to something that better suited Facebook?

Now Facebook is experiencing the same sort of rug-getting-pulled-out feeling as Apple prepares to severely limit the use of advertising IDs on its devices. That decision by Apple last summer caused the same sort of consternation in the digital ad ecosystem, as suddenly device graph firms and attribution companies and mobile app promoters faced an uncertain future. It’s likely that the same kind of doubt is happening atop the major broadcasting networks given Amazon’s aggressive bidding—if we don’t have the NFL on our airwaves, what are we?

Of course, network TV is facing its own unique set of secular challenges. Digital advertising is going through something existential, which is why there’s been so much hope placed on the multiple attempts at fashioning a new form of consumer ID that travels everywhere—and why there was so much disappointment in Google’s seeming lack of interest in that concept.

These efforts miss the point. We’re talking about tactics aimed at preserving the status quo, when the status quo is going out with the tide.

You might not have noticed, but regulators have spoken loudly and promise to only crank up the volume. That reality, and finally respecting customer data, is likely the hidden driver behind Google and other companies’ moves. Consumer privacy, and data security are paramount, and any company or initiative that isn’t built with that protection at the center just won’t work long term. Things aren’t going back in the other direction.

This isn’t to say that data-driven marketing is over. Far from it. Rather, gathering, utilizing and protecting first-party data is mission-critical for every brand and media company if it wasn’t already. The best kind of ID replacement is to have your own data and take every measure to protect it—to stay on the right side of lawmakers and your customers.

It’s that last point that we can’t lose sight of. Your customers have to feel like the relationship they have with companies is clear, upfront, and what they signed up for when they agreed to share any data.

The good news is that companies like ours are pioneering new forms of technology that allow brands to tap into a wide variety of useful data sources without any personal, sensitive consumer data actually going anywhere. The era of data collaboration is upon us. According to the Winterberry Group, 64.3% of US companies are currently collaborating with other organizations on data, and a further 16.7% have plans to do so.

In the near future, brands will be able to get the information they need to better serve customers, without putting either party in a precarious situation.

So instead of looking for short-term workarounds, companies need to future-proof themselves so that a shift by any player (device makers, browser owners, platforms, etc.) or a change in regulation doesn’t knock them on their heels.

Because if one thing seems certain, more big waves are coming. 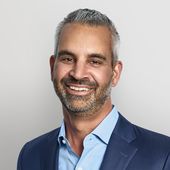 Brian Lesser is chairman and CEO of InfoSum.