Catherine Sadler's Biggest Challenge at Gap Inc. Unit Is to Create a Single Global Voice That Appeals to Retailer's Loyalists and Attracts New Customers
READ THIS NEXT
The 'Mad Men' Prop Auction: 5 Items You Need At Your Agency

Banana Republic's performance has been uneven in recent years as the brand, like siblings Gap and Old Navy, sought to distinguish itself in the crowded specialty-apparel category. But 2012 was a turning point, with same-store sales up 5%, marking the brand's best results in at least five years. Now Banana Republic, along with the rest of Gap Inc., is moving to a global brand-management structure and is trying to better leverage its marketing investment across nearly 700 stores worldwide. 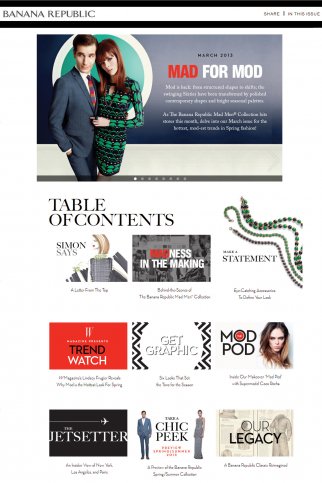 The Banana Republic brand as a 'magazine'

The first move was to appoint Catherine Sadler, its top marketer in North America, as the global chief marketing officer, effective last month. In her new role, she's charged with establishing a singular brand voice and more-consistent brand experience around the world.

Ms. Sadler says her biggest challenge will be to create a global brand positioning that resonates with both longtime customers and those experiencing the brand for the first or second time. "Awareness may be at a different level of development," Ms. Sadler said. "We'll be unified, not uniform."

On a recent Friday afternoon at Gap Inc.'s Lower Manhattan offices, Ad Age visited Ms. Sadler, who had recently returned from a "whirlwind" tour of Japan and England. Ms. Sadler met with the marketing teams and got a feel for how they're running the business outside of North America. There are now more than 80 stores across Asia and Europe.

"The thing I'm struck by is the common customer profile that I see in all of our stores around the world," Ms. Sadler said, describing customers as "not fashion-forward but fashion-aware ... tech-savvy but not tech-forward." The median age is 32, though customers also include recent graduates.

Jaime Katz, an analyst with Morningstar, said the brand has shifted its focus in recent years, appealing to more working men and women with apparel that's a step up from casual. That's helped the brand to charge higher prices than it did just five years ago.

"Banana Republic has become a little bit more polished and work-focused," Ms. Katz said. "[Work wear] is a lot less cyclical than leisure wear. And you can penetrate an audience that has dollars allocated to apparel." 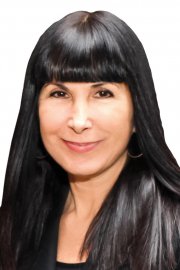 The "Mad Men" partnership, one Ms. Sadler inherited when she joined the brand in 2009, is a good example of how marketing is evolving under her leadership. Less than four years ago, the brand promoted the show in its windows, distributed style guides to shoppers and held a contest with prizes that included a walk-on part. Fast-forward to this spring, when the brand is working with the show's costume designer, Janie Bryant, on its third "Man Men" collection and has launched an online content hub themed "Mad for Mod."

"Sometimes [collaborations] are borrowed interest -- from a marketing perspective, fast and flash," Ms. Sadler said. "We've said, "Let's lean in on this in a significant way and really celebrate it across all of the tools we have at our disposal.'"

Banana Republic, which spent $51 million on measured media last year, is trying to become a content-driven organization, one that can tell stories, an area Ms. Sadler concedes hasn't been a focus.

"There was a time not so long ago where we were all vehicle-led," Ms. Sadler said. "It had to be looked at as: When do we shoot ads to deliver? When do we invite press to hit long lead vs. short lead? When do we produce direct mail to hit the in-home date?"

The marketing team has been reorganized, with the addition of an editorial function, including an editorial director. Outside resources, including editors from several major women's magazines, were brought in to help the brand think like a publisher. And an editorial calendar was crafted, with execs looking broadly across the months of product plans and determining what stories should be told and when to develop those stories.

"We have to think through stories early on to align content across markets and regions. It's a paradigm shift," said Ms. Sadler.

To help the team grasp the concept, Banana Republic thought about its desired content hub as a magazine. Ms. Sadler showed off an early version of the "Mad for Mod"-themed "magazine." Now live, it features a column dubbed "Simon Says" by creative director Simon Kneen, an "Our Legacy" feature highlighting a classic style from the brand's archives, along with its current incarnation, and styling tips that draw inspiration from the newly launched "Mad Men" collection.

While Ms. Sadler is quick to note that the Banana Republic "magazine" may never see the light of day as a printed product, the discipline of creating it -- pulling together content on deadline that will resonate with consumers -- is a good exercise for a brand that has historically told stories through visual merchandising. The magazine also provides a centralized hub for Banana Republic marketers responsible for various aspects of the marketing plan, from direct mail to Facebook, to grab unified pieces of content.

"This movement really does become a great marketing toolkit of aligned stories that can be leveraged and used around the world," Ms. Sadler said.