Connecting Some Dots Amid the All-Important Jaguar Pitch
READ THIS NEXT
The 'Mad Men' Prop Auction: 5 Items You Need At Your Agency

It's not unusual for ad types to describe their professional activity as, pardon the phrase, whoring themselves out. Usually, however, the metaphor remains just that and the sexual services of the agency's personnel are not literally traded out for a better shot a big new account. Thank "Mad Men" for connecting those dots. 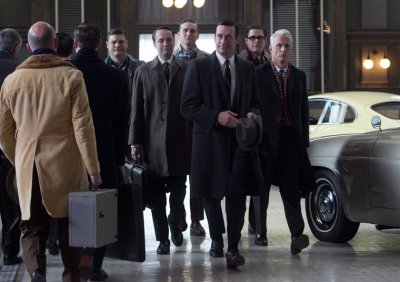 Arriving to make the Jaguar pitch.

The latest episode, a briskly paced, thematically airtight gem, begins with Sterling Cooper Draper Pryce's creative flotilla drifting in the doldrums just days before the all-important Jaguar pitch. Winning this car account, we know, would change the agency -- put it up there with the big boys. But they're having a hard time of it. In a conference room full of worn-out, tie-loosened, shirt-sleeved creatives, we hear that referring to the British sports car as a "mistress" is , no matter how appropriate, verboten.

"The client doesn't want to hear the word mistress," Don tells the pitch team. "The salesmen can use it, the ad campaign can't."

Indeed, the salesmen can be about as nasty as they wanna be, including the chief one, the wonderfully named Herb Rennet, who has one of three votes in the agency review. He asks Campbell and Cosgrove for a roll with Joan in return for consideration in the pitch. Without too much soul-searching -- okay, none -- Pete sort of brings up the request to Joan, telling her the agency will make it worth her while in this incredible exchange:

Joan: You're talking about prostitution.
Pete: I'm talking about business at a very high level. Do you consider Cleopatra a prostitute?
Joan: Where do you get this stuff?
Pete: She was a queen. What would it take to make you a queen?
Joan: I don't think you could afford it.

You see what she did there? She gives the cagey account guy -- once described by Pryce as a "grimy little pimp" -- an opening by not saying 'no,' and that sets the wheels in motion. A dollar figure is generated that makes the whole thing more concrete. I suppose there is a learning here. If someone asks you to sleep with a creepy New Jersey car dealer, and you're not interested in kicking the tires, just say no. Don't be witty.

The partners convene and it's determined that $50,000 ($342,000 in 2012 bucks) is a good number, though that doesn't sit well with Lane, who's already extended the agency's credit line as a slush fund from which he could pay off his tax bill. So the embattled beancounter tells her she'd be much better off asking for 5% of the company. And that 's how Joan Harris became both a prostitute and a partner in the same episode.

Of course, because this is "Mad Men," it's not so straightforward. There is an attempt by Don to head off this particular value exchange with a last-ditch visit to Joan's apartment. He wants to at least make her understand she doesn't have to do this thing she's gonna do. You get the sense this is as much about wanting his creative to win fair and square as it is about preserving Joan's integrity. Still, it's a menschy move, at least in this fallen world. In a strange but effective choice, we get two versions of this scene, a "Roshomon" in miniature. The first is from Don's perspective, when it's meant to be unclear whether Joan is going to do the deed. The second is from hers -- and she has already done it.

It's also quite deft how the cringeworthy night with the Jaguar dealer -- "I don't know how much longer I can restrain myself. Let me see 'em" -- is intercut with Don's pitch, perhaps his best since the Kodak pitch back in the first season. Cheers to unconventional editing techniques applied without a lot of fireworks.

Oh, and did we mention Peggy's leaving the agency?

This had to happen I think, as Joan and Peggy have always sort of been in indirect competition for queen bee at SCDP. Peggy's been frustrated for some time at her lack of real clout, not unlike Pete, and the growing sway of the glitchy but talented Michael Ginsberg, whose latest coup is coming up with the winning Jaguar line. But the last straw is the less than subtle moment when Don throws a wad of cash in her face after she states her desire to go to Paris for an ad shoot. The nerve!

Before long, she's meeting with the much-missed Freddie Rumsen, who sets her up with the slimey yet somehow realistic Ted Chaough, with his surfeit of vowels and oily manner. Chaough, who is to Don Draper as Newman was to Seinfeld, makes her an offer for a present-day equivalent of $130,000. 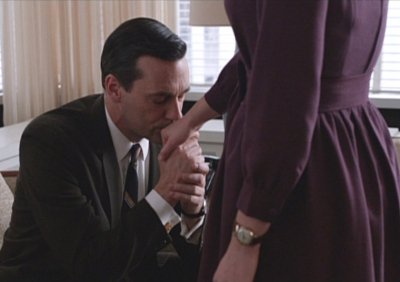 As the office is celebrating the Jaguar win, Peggy resigns to Don, who is glum because it took some old-fashioned hustlin', and not just his creative acumen (or rather, Ginsberg's), to win the business. It's a wonderful, complex exchange, the seeming end of a relationship that has powered the show. Don is somehow both harsh and gracious, one moment belittling the woman he helped make and the next smooching her hand; Peggy is strong but not flinty, teary but never even giving him the chance to make a counter-offer.

Grabbing her thermos and a mug, she goes down the elevator as the opening riff of "You Really Got Me," The Kinks' thrashing ode to female-on-male pwnership, plays over the credits, in another great, appropriate musical choice in a season full of them. The episode, after all, was all about ownership, from cars to people, summed up by Ginsberg's tagline: "At last, something beautiful you can truly own."

Pryce's financial indiscretion needs to reach some conclusion, something that 's made a bit easier with Joan, who has some serious operational chops, rising to partner. Also in need of sorting is Pete's increasingly unhappy home life. We caught a bit more of that this week with him kvetching to Trudy about his long commute home.

Then there's the whole Megan thing. I know her wanting to be an actress is representative of a very important theme -- women's lib -- but the execution is getting a bit tedious. I'm getting sick of the bouncing back and forth between whining, fighting and humping, especially when you know that at most, all this sturm und drang is going to yield her a role as understudy to Grizabella in a traveling version of "Cats" in 1984.