Women's Health Is Ad Age's Magazine of the Year

Circ Growth Plus Smart Brand Extensions Bring in Revenue
READ THIS NEXT
How restaurant chains are duking it out to be the best in their categories
For years Ad Age's A-List honors were grounded in metrics such as ad pages and circulation, but these days consumers and marketers are demanding more of their media brands, so those are no longer the only way to gauge success. That's why this year we looked for magazines that were truly operating as brands, whether that meant making smart licensing moves, becoming retailers in their own right, creating revenue-generating digital content, building smart cross-media content and ad platforms, or finding a way to engage and monetize their communities. The winners in these pages are getting ready for a new era -- and, we believe, are worthy of emulation. 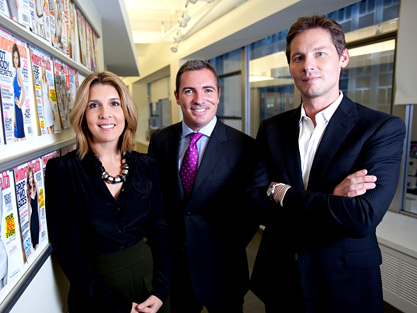 NEW YORK (AdAge.com) -- Most magazines say they're brands too, but Women's Health is (power) walking the talk. And its other platforms aren't just extensions -- they're revenue drivers.

Its free website, for example, leads visitors to two of them, Fit Coach and the Abs Diet for Women, which charge membership fees. The brand's third annual "Are You Game?" event attracted more than 60,000 women and nine sponsors this summer. Women's Health is publishing two books in the second half of this year and plans to publish somewhere between six and 10 more books each year going forward. All are just some of the reasons why Women's Health is Ad Age's Magazine of the Year.

"We have an aggressive content strategy that starts with the magazine and moves across multiple platforms," said Michele Promaulayko, the former executive editor at Cosmopolitan who was named editor in chief at Women's Health in December.

Women's Health has also delivered its publisher, Rodale, new advertising in women's fashion and beauty: Ads in the October issue promote brands including Clinique, Garnier, Tresemme and Aveda. Ad pages in the issues from January through October fell 14.4% from the same period in 2008 -- not a typical performance for our Magazine of the Year. But monthlies on the whole fell almost 22%, according to the Media Industry Newsletter. It's never been more clear that ad pages can't be magazines' whole game. Not incidentally, Women's Health has a lot more going on, too -- including an impressive welcome from women.

So now Rodale is looking a little higher still. "There could be a day when Women's Health is selling a million or more at newsstand, and certainly reaching over 2 million in total circulation," said David Zinczenko, editorial director of Women's Health since fall 2008 and longtime editor in chief at Men's Health.

Women's Health has another asset: Men's Health, the brand from which it was spun. "There's no doubt Women's Health had a jump-start when it launched because of brand recognition," said Jack Essig, senior VP-publisher of both titles. "That opened the door at a time when people said, 'Oh my gosh, not another women's magazine.'"

They're separate titles, but still operate on parallel, frequently complementary tracks. You could see that dynamic at work in August, when Women's Health introduced its first iPhone application, "Women's Health Workouts," a $1.99 app that took advantage of new iPhone capabilities to let users buy expansion packs within the app itself -- no separate visit to the App Store required.

Men's Health introduced its version of the app two months earlier. The titles' staffs also created Children's Health, a special out last month. And they collaborated on interviews with President Obama and Michelle Obama. "Synergy is the VCR of media right now -- discredited, outdated and left behind," Mr. Zinczenko said. "But in this, case it works."

And Women's Health isn't constrained by the link. On Sept. 29, Women's Health introduced a second app, "Your Slim-Down Shopping List," a free program unique to the brand. The list will expand automatically as the title adds content, without requiring new downloads from users. The app didn't have a sponsor at launch, but Women's Health said the opportunity for one exists. We'll bet it finds one.