But Some Brands' Buzz Got Worse After the Game, Study Finds
READ THIS NEXT
Amp spotlight: Super Bowl 2020’s best—and most memorable—ads

NEW YORK (AdAge.com) -- Repetition and the reliance on a winning formula were the keys to success in this year's Super Bowl. And no, we're not talking about the Green Bay Packers passing game or its tenacious blitzing defensive schemes. We're talking Doritos and Snickers, this year's clear winners in the annual YouGov Polimetrix BrandIndex study of the Super Bowl, which measures the brand buzz gained in the days following the game's very expensive commercials.

Across gender, age and geography -- see the charts below -- Doritos and Snickers ranked at or near the top of spots increasing positive buzz, according to YouGov's daily interviews of 5,000 adults from New Year's Day through the days after the game. 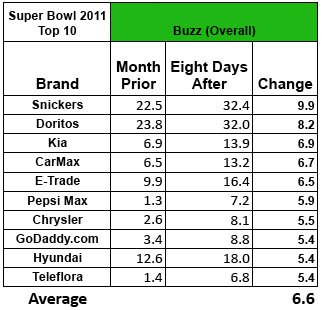 The study proves that marketers' investments -- Fox was looking for $2.8 million to $3 million for 30 seconds during the 2011 Super Bowl -- can prove incredibly fruitful despite the cost, said Ted Marzilli, global managing director of YouGov's BrandIndex.

"The Super Bowl is a unique event," Mr. Marzilli said. "It's not just the size of the event. It's live, so people aren't going to TiVo and fast-forward through the commercials. The commercials are arguably as big if not a bigger part of the event as the game itself. It's a unique platform and for those who execute well, it's hard to beat in terms of making a one-time big splash."

This year's most-talked about Super Bowl advertiser Groupon, who came under fire for what many deemed to be highly insensitive commercials, was not on the list due to its late entry into the game, which kept YouGov from compiling any pregame data on the brand.

Plenty of people want to know whether Groupon, whose commercial offended plenty of viewers but amplified awareness of the company too, helped or hurt its cause with its Super Bowl commercial. But because it bought time during the game at nearly the last second, unfortunately, YouGov didn't compile pregame data on Groupon.

But the game's most talked-about spot both before and after the game, Volkswagen's Darth Vader-themed commercial, did not generate a significant amount of positive buzz for the brand. Its highest showing was among viewers at least 50 years old, among whom it boosted a positive buzz score of 5.6. Snickers, by comparison, scored a good-buzz boost of 9.9 across all ages.

"Something like the VW ad can be artistically interesting and very attractive and somehow just not stick with consumers, particularly in the environment of a major event that has another 25 or 30 advertisers," Mr. Marzilli said. "I'm not saying the commercial wasn't good enough to reverberate with our subjects, but among the folks we queried that ad didn't make the top 10 in most cases."

With regards to Android, Mr. Marzilli said, "The lesson here might be 'don't mess with Apple.'" 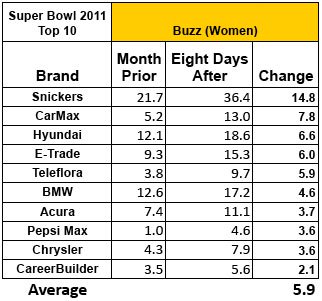 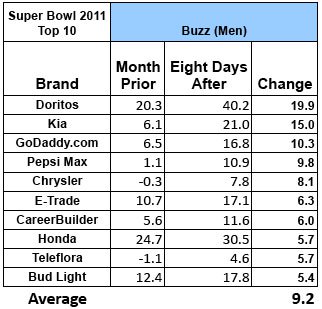 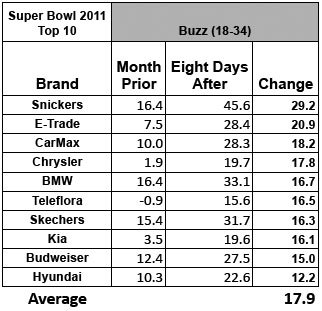 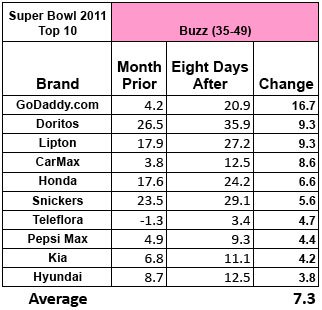 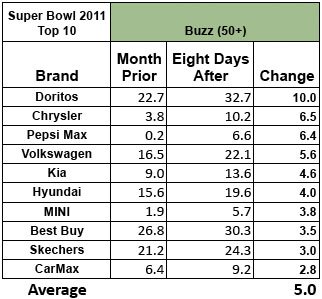