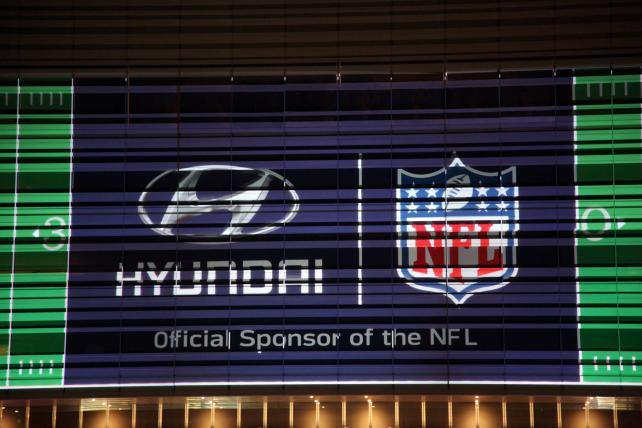 Hyundai is coming back to the Super Bowl with a 60-second ad that will run in the first quarter of the game on Feb. 3. Agency-of-record Innocean Worldwide will handle the spot.

The automaker did not release any creative details. However, the ad's first-quarter placement suggests a different strategy than what Hyundai pursued the past two years when it attempted to film its ads in real-time during the game.

For its 2018 ad Hyundai promoted its nonprofit group, Hyundai Hope on Wheels, which distributes a small portion of proceeds from every Hyundai vehicle purchased to institutions fighting childhood cancer. The original plan was to film pre-selected Hyundai owners walking into the stadium on game day. But due to security and concerns and logistical issues, Hyundai had to change plans at the last minute and use footage of fans captured during the week leading up to the game.

In 2017, Hyundai pulled off the real-time approach, filming overseas U.S. military troops watching the game in custom-built, 360-degree immersive pods. They were virtually reunited with family members watching the game at the stadium. The spot aired immediately after the game ended.

The last time Hyundai took a more traditional approach with pre-filmed ads was in 2016 when it ran two in-game ads and one spot that aired between the coin toss and kickoff. The pre-game ad, called "First Date," starred Kevin Hart and went on the win USA Today's Super Bowl Ad Meter contest.

For the 2019 game, Hyundai plans to run a 30-second pre-game ad in addition to the first quarter spot. The automaker, which is an NFL sponsor, is also planning experiential marketing activations on the ground in Atlanta, where the game will be played. "The Super Bowl is America's largest stage that allows us to entertain a massive audience while sharing our latest brand and product messages," Dean Evans, chief marketing officer for Hyundai Motor America, stated in a press release.

Hyundai joins Kia and Mercedes-Benz as automakers that have confirmed 2019 Super Bowl ads.