MetLife Gearing Up for Role as Host of 2014 Super Bowl

Super Bowl XLVIII -- to be held in East Rutherford, N.J, home of the New York Giants and Jets -- is more than a year away. But naming-rights sponsor MetLife is already gearing up to market its role in the first cold-weather Super Bowl at an open-air venue on Feb. 2, 2014.

Stadium naming-rights deals have plummeted over the last decade thanks to the U.S. economic recession and bad deals by worse sponsors. Remember Enron Field, which ended up Minute Maid Park after the notorious Houston energy company collapsed into scandal and bankruptcy? But MetLife took the gamble in 2011 and signed a 25-year deal to slap its brand across the new home of the New York Giants and Jets.

That's a big commitment. But the $1.6 billion stadium is in the nation's biggest media market -- and the only venue to house two NFL teams.

Roughly 50,000 visitors have signed up for a MetLife "Countdown Card," which enables them to win free tickets and prizes and get autographs from ex-Giants and Jets players.

"It worked out very nicely for us," said Mr. Pincus, while standing in the branded, 120,000-square-foot "MetLife Central" area. "It was our first year as naming-rights partner, first year as a Super Bowl advertiser and, ultimately, one of our home teams won the Super Bowl."

But Darren Rovell, ESPN's sports-business reporter, is still not a believer. For one thing, it's harder for an insurance company like MetLife to sell its products/services to attendees than for typical naming rights sponsors such as a beverage or airline.

Since the U.S. recession, companies have been stricter about holding a CEO or CMO's feet to the fire over naming-rights deals that don't generate an adequate return on investment.

Said Mr. Rovell: "It's not like 10 years ago. After 2008, we entered this time where it can't just be cool. If a deal for a lot of money doesn't seem like it's making it, I think that guy's job is on the line." 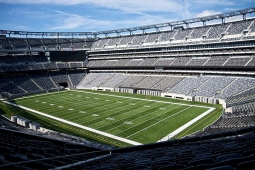 MetLife counters it's not just slapping its brand on the stadium. This year, it "doubled down" on its investment, said Mr. Pincus, by building a football field where Countdown cardholders can throw passes, kick field goals and run football drills.

There's also a new video section where they can film their own touchdown dances in front of green screens and play interactive games.

MetLife is sending a team to New Orleans for Super Bowl XLVII to kick off its yearlong activation effort.

"We're looking at opportunities in '13 in New Orleans that will help seed and build toward '14 here in the New York area," Mr. Pincus said.

"It's a new tradition: you come in, you give Snoopy a high-five," said Mr. Mayne. "You know superstition and sports go together."