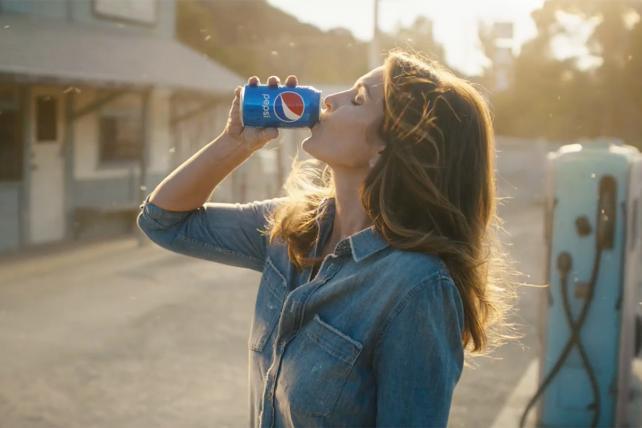 I'm Jeanine Poggi, Ad Age's senior editor, kicking off our countdown to Super Bowl LIII. I may not know everything about which teams are in contention to battle it out on Feb. 3 from Mercedes-Benz Stadium in Atlanta, Ga., but what I do know are the commercials. In the weeks leading up to the game, Ad Age will be bringing you breaking news, analysis and first looks at the high-stakes, big-game commercials -- all in our Super Bowl Alert newsletter. This is the first edition. Sign up here to get it delivered to your inbox.

Flashback: Last year, PepsiCo plugged Mtn Dew and Doritos with a two-part, 60-second ad starring Morgan Freeman and Peter Dinklage. Pepsi also tapped into its archives with a 30-second spot that featured pop culture icons that have appeared in Pepsi ads over the years, including Britney Spears and Cindy Crawford.

(For those inclined to reminisce on Super Bowl ads of yore, you can peruse our voluminous, searchable Super Bowl Ad Archive.)

Squarespace, which has been a Super Bowl staple for the past five games, will sit out this year, according to a person familiar with the situation. A company spokeswoman declined to comment on Squarespace's Super Bowl plans.

Web-service companies have had a meaningful presence in recent Super Bowls, but it appears that could be changing. There's still no indication whether Wix.com will run an ad, as they have for the past four years, and GoDaddy, which had been a regular Super Bowl advertiser over the last decade, did not run an ad in 2018.

Other advertisers that also currently plan to sit out this year that were in the game in 2018 include Airbnb and Groupon. "The Super Bowl was an amazing experience, which we viewed as a great way to introduce America to our spokeswoman Tiffany Haddish, as well as remind people of the importance of supporting local businesses," a Groupon spokesman said in an email. "That mission accomplished, we don't plan to return this year."

Audi said on Friday that it is returning to the Super Bowl after sitting out last year, Schultz reports. The luxury auto brand will use a 60-second spot in the second quarter to spotlight its electric vehicle ambitions. This is Audi's 10th Super Bowl ad. The brand received some backlash for its 2017 Big Game spot, however: While "Daughter" promoted equal pay for women, critics lambasted Audi for not practicing what it preaches, noting the majority of the company's executive team is male. Still, "Daughter" touched plenty of people, finishing third in USA Today's Ad Meter ranking.

Automakers have the biggest presence so far in the game, with Mercedes-Benz, Hyundai, Kia and Toyota all buying ad time.

General Motors, which ran a Super Bowl ad in 2017 (for Buick), remains noncommittal, at least publicly. GM-owned Chevy just debuted a big-budgeted campaign for Silverado. Asked if the campaign will include a Super Bowl spot, Paul Edwards, VP of Chevrolet marketing, told Ad Age that "I wouldn't say yes or no for sure," adding, "I would tell you that we have a few more surprises we will roll out through the course of this month, so stay tuned."

TurboTax also said on Friday it's returning to Super Bowl LIII for its sixth consecutive spot. It's part of a new marketing investment that parent Intuit is making in the National Football League. (Intuit, which aired its first Super Bowl ad for the corporate brand in 2018, won't do the same this year.)

Other returning sponsors include Avocados From Mexico, WeatherTech, Mars' M&M's and Kellogg's Pringles.

Don't forget to bookmark our Super Bowl ad chart, which is the most current look at all the marketers confirmed to air national spots in Super Bowl LIII.

Dating app Bumble is launching a new campaign during Super Bowl LIII starring tennis superstar Serena Williams. But the company didn't indicate if it will actually air a national ad during the game. If it does decide to run a spot, it could be a big win for how women are portrayed in the Super Bowl. The campaign, titled "The Ball Is in Her Court," is focused on women making the first move in dating, friendship and business. It was developed, produced and led by a team comprised entirely of women, according to the company.

While Super Bowl commercials have surely moved away from portraying women as sex objects, or as the quintessential nagging wife, women continue to play a much smaller role in Big Game ads than males. Super Bowl ads where women played a modest role grew to 34 percent of the total in 2018 from 21 percent the year prior, according to research firm ABX. But the percentage of ads where women played a "significant" role fell to 34 percent from 43 percent. Men were prominent in 72 percent of the ads.