This means something, just not what most users think. The connotation, before it was embraced by business folk, was about making frequent and sometimes contradictory choices, i.e. being fickle. As such, it may secretly be an apt use of language. But deciders should use "decisive" to convey the intended meaning. 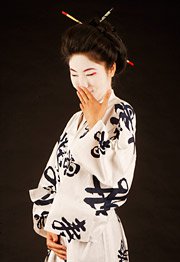 The image of corporate executives gently loosening and dropping their kimonos in advance of Geisha-like acts with one another is very disturbing. But it, too, may be secretly apt. The failure of so many deals suggests the due diligence described by this phrase focuses too much on the heat of the moment and too little on the morning after.

Here because it's so widely used and sounds so dirty, particularly in the context of many personal-care categories. But it may really be useful language because, unlike so many entries on this list, it describes something real, using fewer words or syllables than the alternatives. Even so, please keep your touch points inside the kimono unless asked otherwise.

Marketing that, like a serial killer perched in a tower, aims in all directions. Also known as holistic, which apparently does the same thing, maybe using herbal medicines. We still like former Colgate-Palmolive Co. Chairman-CEO Reuben Mark's joke that the combination of the company's shotgun marketing with its 360 approach could create self-inflicted wounds.

A catchall for the dismal post-Great Recessionary world. Let's face it, this feels normal to almost no one and good to even fewer people. In marketing, where rules and conditions of social media, mobile and other digital marketing evolve constantly, it's particularly meaningless. Or, maybe that's the ... new ... normal -- aieee!!!

ALL THE WAY TO BRIGHT

We're not sure how this weirdest of phrases came to be. But it sounds like reports of near-death experiences. Perhaps any marketers who fully master the Zen-like intricacies of social media, where they no longer own brands or shill for them but profit immensely by bathing in the warmth of collective goodwill, are close to meeting that great light.

Is there any media left that's not? Or at least that doesn't delude itself into believing it is?

A good concept gone bad by mis- and overuse. It's come to be a squishy, feel-good catchall for doing the right thing. Used properly, it describes practices through which the global economy can grow without creating a fatal drain on resources. It's not synonymous with "green." Is organic agriculture sustainable, for example, if more of the world would starve through its universal application?

Besides not really being a word, it describes something that's often not a strategy. Its roots stretch to the dot-com era, where you lured traffic with free services, then figured out how to get paid. Many, notably those in print journalism, are still working on that last part. Then again, so is much of social media.

AT THE END OF THE DAY

This pernicious weed of language takes six words to say what "ultimately," or perhaps better still, nothing at all, could convey better. At the end of the day, we'll all be all the way to bright.