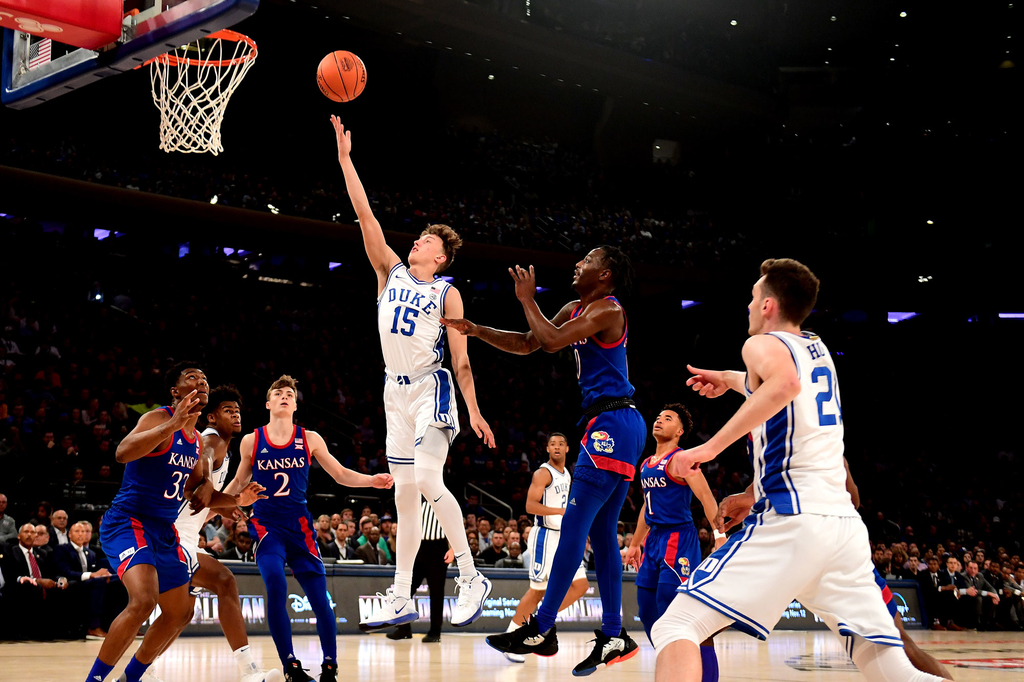 In the past 20 years, CBS’s three most-watched college basketball broadcasts have featured Duke.

Marketers that haven’t yet lined up a date to the Big Dance will be staying at home this March, as CBS and Turner Sports have sold out the linear TV inventory for the NCAA Div. I Men’s Basketball Tournament in record time. According to the execs who oversee tourney ad sales, every last in-game commercial unit in the three-week college hoops showcase has been auctioned off to a client roster primarily made up of automotive, insurance, telco, fast food and financial services brands.

According to John Bogusz, CBS’s executive VP of sports sales and marketing, those who may have dragged their feet on a March Madness buy will not be saved by a half-court heave at the buzzer. Not a scrap has been held back for scatter, Bogusz says, thereby closing the books on the tourney a full month before the opening tipoff.

“All the inventory has been spoken for,” Bogusz says, dispelling any notion that a few 30-second spots might still be kicking around somewhere in the recesses of an Excel file. Last year, roughly 5 percent of the in-game units were still in play when Prairie View A&M and Fairleigh Dickinson met in Dayton for the first of the tournament’s 67 games.

As in years past, those outstanding units were set aside to sell to any of the tourney’s official sponsors that may have been looking to add a little something extra to their initial investment. Those so-called “Corporate Champions” (AT&T, Capital One, Coca-Cola) and “Corporate Partners” (a collection of 15 brands that includes Buick, Geico and Pizza Hut) account for more than half of all March Madness ad spend. The socked-away units were also useful for providing make-goods for any audience deficiencies that might arise over the course of March Madness.

Media buyers suggest that the era of high-end sporting events selling out faster than a K-POP concert tour is now upon us, and brands that hope to luxuriate in the bounty of sports GRPs will need to step up their planning and budgeting, lest they find themselves shut out of the action.

“March Madness is the biggest sports-media event of the spring, if not the entire year,” says one national TV buyer. “The audience is younger, they’re more affluent, and you have their undivided attention for the better part of three weeks. I’m not surprised it sold as fast as it did.”

The fast-break sales push comes on the heels of Fox’s breakneck sellout of Super Bowl LIV and Turner’s record turnaround with the 2019 NBA All-Star Game. The clip at which the market is moving is a function of sports’ massive commercial impressions and the fact that there’s little else on TV that can still move the marketing needle. Case in point: While the average scripted broadcast series is now delivering a 0.7 rating, or fewer than 950,000 adults 18-49, last year’s Final (Texas Tech-Virginia) scared up a 5.3, good for 6.85 million members of the dollar demo.

Even when the lower-rated early rounds are factored in, March Madness out-delivers everything in its path. While last year’s tourney averaged 10.5 million viewers per window across CBS and Turner’s TBS, TNT and truTV, the 73 primetime comedies and dramas on the Big Four nets are now eking out less than half that audience (4.49 million viewers).

Naturally, the NCAA marketing partner program makes for a high concentration of loyal customers. Bogusz is quick to acknowledge that the steadfast backing of the Corporate Champions and Corporate Partners plays a significant role in moving in-game inventory. At the same time, he notes that the high-visibility positions assumed by a General Motors or an AT&T often spur big buys from their competitors in the brand space.

“GM is a Corporate Partner, as is Nissan,” Bogusz says, before adding that the latter serves as the presenting sponsor of the pregame show (“Nissan Tip-Off”) while GM’s Buick is the presenting sponsor of the post-game show. Not willing to let those two marques monopolize the ratings lane, rival automakers tend to crash the boards; last year saw Ford, Mazda, Acura, Subaru and Jeep make significant investments in the tourney alongside brands from GM’s Cadillac and GMC divisions.

In addition to the top-spending auto category, the tournament’s most ardent backers include insurance, telco, financial services and fast food brands. Among wireless carriers, AT&T runs the point as the presenting sponsor of the halftime show and, per iSpot.tv data, last year’s biggest in-game ad spender. Along with its deep-pocketed commercial spend, Capital One’s sponsorship of the studio/bridge show and the championship game’s pregame show puts it head and shoulders above its financial services rivals.

The tech players, or the FAANG set, will also play a significant role in the spring tournament. Bogusz says the category has spent more on this year’s Dance than ever before.

Not all of the tournament’s big spenders are cozy with the NCAA. Among the most visible advertisers in the 2019 showcase that are unaffiliated with the college athletic association were Samsung Mobile, Progressive, Apple (iPhone), State Farm and Taco Bell.

You get what you pay for

CBS and Turner do not comment on how each stage of the tournament is priced, but TV buyers say that the late-afternoon Final Four broadcast fetched as much as $825,000 per 30-second spot, while the primetime window commanded around $950,000 per unit. Set to air on TBS on April 6, the title-tilt inventory cost between $1.9 million and $2 million per unit on the high end of the scale. (Arriving at an average unit cost for the March Madness in-game spots is a fool’s errand, given that rates are pegged to each marketer’s overall investment. A brand that buys 90 spots across the tourney will pay a lower rate than a less-committed advertiser that ponies up for 25 units.)

All told, the 2019 tournament generated $655.1 million in ad revenue, according to Standard Media Index estimates.

CBS and Turner sell ads across the breadth of the three-week event, a soup-to-nuts strategy that keeps the marquee broadcasts off-limits to dabblers. “When we sell, we sell the entire tournament,” Bogusz says. “You can’t just come in and cherry-pick the National Championship.”

While ratings for the final three games will almost certainly be lower than last year’s—in keeping with their shared rights deal, stewardship of the Final Four and Championship Game alternate between CBS and TBS; this is a cable year—that’s not to say that a TBS telecast doesn’t have a real shot at pulling numbers. Back in 2014, when the Turner net hosted its first Final, the Connecticut-Kentucky game averaged a more-than-respectable 21.2 million viewers and a 7.2 in the demo.

To focus entirely on TV, however, is to suffer a Mr. Magoo-grade form of media myopia. As Jon Diament, executive VP and chief revenue officer of Turner Sports, notes, the digital monolith NCAA March Madness Live not only draws a massive audience alongside the traditional TV deliveries (last year’s tourney set high-water marks with 100 million streams and 24 million hours consumed), but is also instrumental in reaching a significant cohort of younger, more affluent fans. This especially holds true during the first days of the Madness, when hordes of office workers who can’t otherwise duck out to watch their teams turn to the Turner/CBS livestreams.

Digital sales for this year’s tournament have outstripped expectations, Diament says, who notes that the livestreams are sold apart from the TV inventory. There is some overlap between the two platforms, however. “We sell digital separate, but we do have a significant number of advertisers who buy both,” Diament says. “The demos are pretty similar … although streaming skews a bit younger.”

The devil’s in the details

As far as the National Championship game is concerned, the TV turnout for the game largely depends on the matchup. In the last 20 years, CBS’s three most-watched college basketball broadcasts have featured the Duke Blue Devils—a team which, like the New York Yankees and Dallas Cowboys, enjoys a massive national following of die-hard fans and equally passionate hate-watchers. (CBS Sports boss Sean McManus is a Duke alum, so any Finals appearance by Mike Krzyzewski’s charges is cause for celebration at Black Rock.)

Duke’s last title dance was in 2015, and its 68-63 victory over Wisconsin still stands as the 21st century’s most-watched college hoops game, with 28.3 million viewers tuning in to CBS. In securing their coach’s fifth title, Krzyzewski’s team helped draw the largest crowd for an NCAA Final since 1997.

Because there is no consensus favorite to cut down the nets in Atlanta—since the season began no fewer than seven teams have occupied the No. 1 spot in the AP 25 poll—this year’s Dance could be one for the ages. The last time as many squads cycled in and out of the top polling position, fans were treated to the instant classic that was the North Carolina State-Houston title tilt in 1983. (As it happens, the Wolfpack’s upset of the Cougars stands as CBS’s third most-watched college basketball broadcast.)

Look for Baylor, Gonzaga, Kansas and San Diego State to lay claim to the tourney’s four No. 1 seeds, while the likes of Duke, Maryland and Dayton only seem to be getting stronger as March beckons.

Speaking of Dayton, Sean McManus isn’t the only CBS exec who’s vocal about his alma mater. When asked who he’s pulling for in March, Bogusz advises Ad Age to “keep a keen eye on those Flyers—they may not be on everyone’s radar.” With no dog in the fight (his Syracuse Orange are likely headed to their second NIT in four years), Diament says he likes Gonzaga’s chances.

The 2020 NCAA Men’s Div. I Basketball Tournament tips off Tuesday, March 17 on truTV.