As my colleague Michael Sebastian reported yesterday, Rolling Stone has been getting plenty of heat for putting a "selfie" of alleged Boston Marathon bomber Dzhokhar "Jahar" Tsarnaev on its upcoming cover, promoting an investigative feature that examines (per the coverline) "How a Popular, Promising Student Was Failed by His Family, Fell Into Radical Islam and Became a Monster." 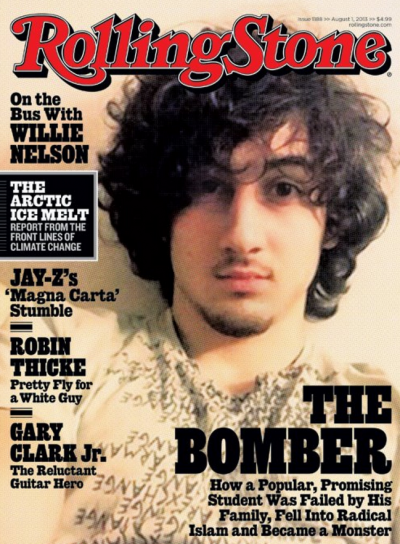 Critics say that giving the cover to Tsarnaev, and using that particular photo, glorifies violence and makes him look like some kind of pop star. "Rolling Stone" was a Top 10 trending topic on Twitter for most of yesterday, and the #BoycottRollingStone hashtag appeared in countless tweets.

But not everybody's piling on. For instance, in a USA Today piece titled "Don't stone 'Rolling Stone' over Boston bomber cover," Rem Rieder writes, "I'm not sure Rolling Stone is guilty of any journalistic war crimes," adding that,

Some commenters have wondered what a magazine that tends to feature on its covers musicians like, er, the Rolling Stones is trying to tell us by putting an alleged terrorist out there. But Rolling Stone has a long history of featuring serious news coverage as well as rock 'n' roll.... And, speaking of mass murderers, Charles Manson was once on the cover of Rolling Stone.

We may want the media to reconfirm for us that psychopaths are crazed, nutty, creepy recluses whom we can easily identify and thus avoid. But, as this cover reminds us, that simply isn't the case. Some psychopaths point guns at cameras; others snap selfies in T-shirts. As Tsarnaev's many friends could attest, we aren't as good as we'd like to believe at spotting the evil beneath the surface.

And in a post titled "The Inconvenient Image of Dzhokhar Tsarnaev," The New Yorker's Ian Crouch writes,

Many commenters on Facebook have complained that the image gives Tsarnaev the "rock star" treatment -- that his scruffy facial hair; long, curly hair; T-shirt; and soft-eyed glance straight at the camera all make him look like just another Rolling Stone cover boy, whether Jim Morrison or any of the many longhairs who appeared in the magazine's nineteen-seventies heyday. But these elements are not engineered. What is so troubling about this image, and many of the others that have become available since April, is that Tsarnaev really does look like a rock star. In this way, the photograph on Rolling Stone is of a part with the often unexpected, and unsettling, portrait of Tsarnaev that has emerged over the past few months.

It's clear, by the way, that many of the people trashing Rolling Stone in social media are unaware that the magazine used an unretouched Tsarnaev self-portrait for its cover; the erroneous assumption that Rolling Stone must have somehow shot and styled Tsarnaev to look like a rock star is fueling some of the outrage.

On a personal note, I have friends who live in Boston, and my mom and one of my sisters live in Rhode Island near the Massachusetts border, close to where Tsarnaev lived (I've driven past the UMass Dartmouth campus where he attended school countless times when visiting my family). Though no one I know experienced personal loss from the Boston Marathon bombing, they were nonetheless deeply traumatized by the tragedy. So I can understand why those affected directly or indirectly would not want to see Tsarnaev's face on the cover of any magazine.

Then again, I was living in New York on 9/11, and in the days and months and years that followed, the media certainly didn't shy away from publishing Osama bin Laden's face pretty much everywhere. I don't recall widespread objection to the media showing us, again and again, the face of the 9/11 mastermind.

The difference, of course, is that bin Laden was creepy/menacing-looking, whereas Tsarnaev... is not.