The Onion A.V. Club Rocks Out, Karaoke-Style, With a Little Help From Starbucks | Ad Age
Skip to main content

The Onion A.V. Club Rocks Out, Karaoke-Style, With a Little Help From Starbucks

Here's a lovely idea from the gang at The Onion: A.V. Club Undercover, a new music-video web series in which 25 different bands are being invited to cover 25 different songs -- some beloved classics, others cheeseball karaoke standards. The A.V. Club, of course, is satirical newspaper The Onion's generally excellent non-satirical arts-and-entertainment publication, which lives on the web at avclub.com. It was born as a section of the physical newspaper, though The Onion has lately been cutting back on its A.V. Club's print version -- mostly recently in its New York edition -- in favor of the website. (See my colleague Nat Ives' interview with the CEO of The Onion for more on its print-vs.-web strategy.) 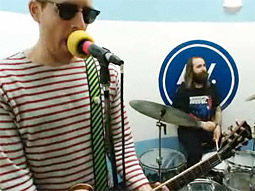 Ted Leo and the Pharmacists kick off A.V. Club Undercover, sponsored by Starbucks.
A.V. Club Undercover, sponsored by Starbucks, debuts today with Ted Leo and The Pharmacists (touring in support of their new album "Brutalist Bricks") covering Tears For Fears' "Everybody Wants to Rule the World," from "Songs From the Big Chair." The fact that "Big Chair" turns 25 this year reminds me that we're all just racing to the grave... but I digress.

Oh, but speaking of death, it's worth noting that The Onion converted its Chicago morgue -- the print-media world's term for the storage area where back issues are kept -- into a mini studio for this web series. The symbolism is more than a bit poignant: Clear out the inky legacy of print to make room for more original online content, y'all!

Anyway, every Tuesday a new band covers another song selected by A.V. Club editors. Want to know who's going to cover Journey's "Faithfully," The Cure's "In Between Days," Nirvana's "Silver," Starship's "We Built This City," etc.? Stay tuned ...

Now, here's the giveaway part: To celebrate the launch of A.V. Club Undercover, I'm randomly giving away a prize pack: a copy of "Brutalist Bricks" and a copy of "Songs from the Big Chair" (in your choice of physical CD or digital download). And, heck, I'll even throw in something from Starbucks: a $20 gift card, so you can buy some of that new VIA Ready Brew or whatnot.

THE FINE PRINT: To enter my random drawing in this informal Media Guy's Pop Pick giveaway, send me an e-mail with "Undercover" in the subject line on or before April 16 (the cut-off is 12 midnight EST). You must have a valid U.S. mailing address and be 18 or older.

~ ~ ~
Simon Dumenco is the "Media Guy" media columnist for Advertising Age. You can follow him on Twitter @simondumenco.