New Honor Will Recognize the Best Artist-Brand Collaboration of the Past Year
READ THIS NEXT
Jeff Bezos’s wealth soars to $171.6 billion to top pre-divorce record

The Tribeca Film Festival today announced it's introducing the Tribeca X Award, a juried award for branded entertainment. The submission window opens Feb. 8 and continues through March 4 for the new honor, which will "highlight the excellence, authenticity, originality and creativity in storytelling that is sponsored or underwritten by a brand and recognize the best artist-brand collaboration of the past year," according to a festival statement. The 15th annual TFF will take place April 13-24. 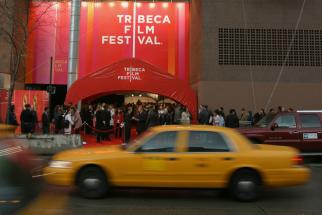 The Tribeca X Award launch comes in the wake of January's news that Droga5 veteran Andrew Essex had been named CEO of Tribeca Enterprises, the festival's parent company, while Jane Rosenthal, who co-founded the festival in 2002 with Robert De Niro and Craig Hatkoff, moved up to executive chair.

"At Tribeca," Ms. Rosenthal told Ad Age, "we have been fascinated by the shift we've seen across traditional models of entertainment, art and advertising over the past decade, as brands step in to serve as financiers and studios. The Tribeca X Award celebrates this new paradigm and the high-quality, provocative storytelling that comes from brand and artist collaboration."

Mr. Essex added that "People no longer seem to care where a story comes from, as long as it's great. Brands increasingly acknowledge this and often produce extraordinary content that rises to the standards of world-class storytelling."

The Tribeca Film Festival will once again be presented by AT&T, but the Tribeca X Award will have its own sponsor: GE.

"The best stories compel, engage and delight their audiences," said GE CMO Linda Boff in a statement shared by the Tribeca Film Festival. "For brands to really break through, these stories need to be just as engaging as the best entertainment, films and documentaries. We're incredibly proud that TFF has recognized this and GE is proud to celebrate the best work conceived by/for a brand with the new 2016 Tribeca X Award."

Branded entertainment was previously not eligible to be honored at the Tribeca Film Festival. That's generally been the case elsewhere on A-list festival circuit, although there have been exceptions. In January, for instance, a NetScout-supported film directed by Werner Herzog premiered at Sundance.

Additional details about the Tribeca X Award will be released on TribecaFilm.com later today.