On the eve of Tuesday’s runoff election, the conservative PAC uses the president’s own words against him
READ THIS NEXT
Watch The Lincoln Project’s data-driven viral video, plus a young poet’s instant fame by the numbers: Datacenter Weekly 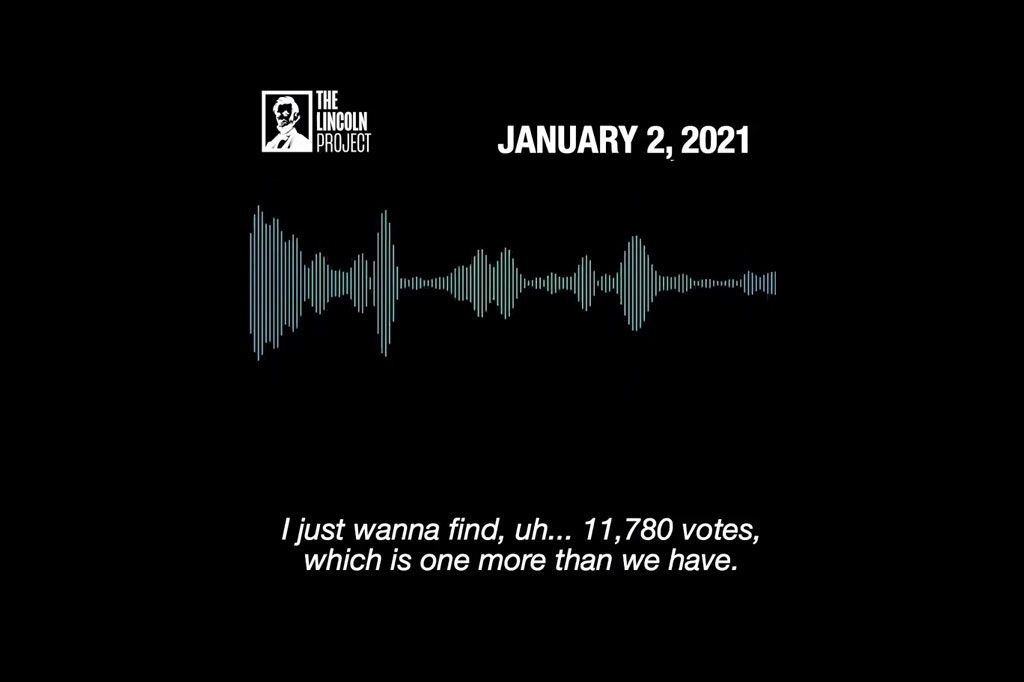 As Georgia state residents get ready to vote in Tuesday’s special election (for context, see the latest edition of Ad Age’s Campaign Ad Scorecard: “Ad infinitum: spending nears $500 million in Georgia’s Senate runoffs”), conservative PAC The Lincoln Project is out with an ad (below) that minces no words. “DONALD TRUMP IS A TRAITOR” appears in all-caps white type against a black background at the start of a 69-second video the group released late Sunday night on Twitter.

Throughout the ad, additional statements—“TRUMP LOST,” “HE KNOWS IT,” “HE DOESN’T WANT YOUR VOTE TO COUNT” and “ON JANUARY 6TH DONALD TRUMP WILL LOSE AGAIN”—are silently flashed on screen, but the core of the piece simply consists of audio excerpted from a Jan. 2 Trump phone call in which he tried to convince Brad Raffensperger, Georgia’s Republican secretary of state, to somehow reverse the state’s presidential election results to hand Trump the win instead of Joe Biden. At one point Trump can be heard telling Raffensperger that “there’s nothing wrong with saying that, you know, uh, that you’ve recalculated. ... So, look. All I wanna do is this. I just wanna find, uh ... 11,780 votes, which is one more than we have.”

The audio comes from Raffensperger’s recording of the call, which The Washington Post released on its website on Saturday; see “‘I just want to find 11,780 votes’: In extraordinary hour-long call, Trump pressures Georgia secretary of state to recalculate the vote in his favor.”

As Ad Age previously reported, The Lincoln Project launched in December 2019 with an op-ed in The New York Times headlined “We Are Republicans, and We Want Trump Defeated” (subhead: “The president and his enablers have replaced conservatism with an empty faith led by a bogus prophet”). In December, Rick Wilson, a veteran Republican political strategist and co-founder of the group, spoke at length with Ad Age; see “The Lincoln Project’s Rick Wilson on the ads that actually worked.”

#TrumpLost ... he knows it. These are the words of a #Traitor. pic.twitter.com/iISGhIcqqg