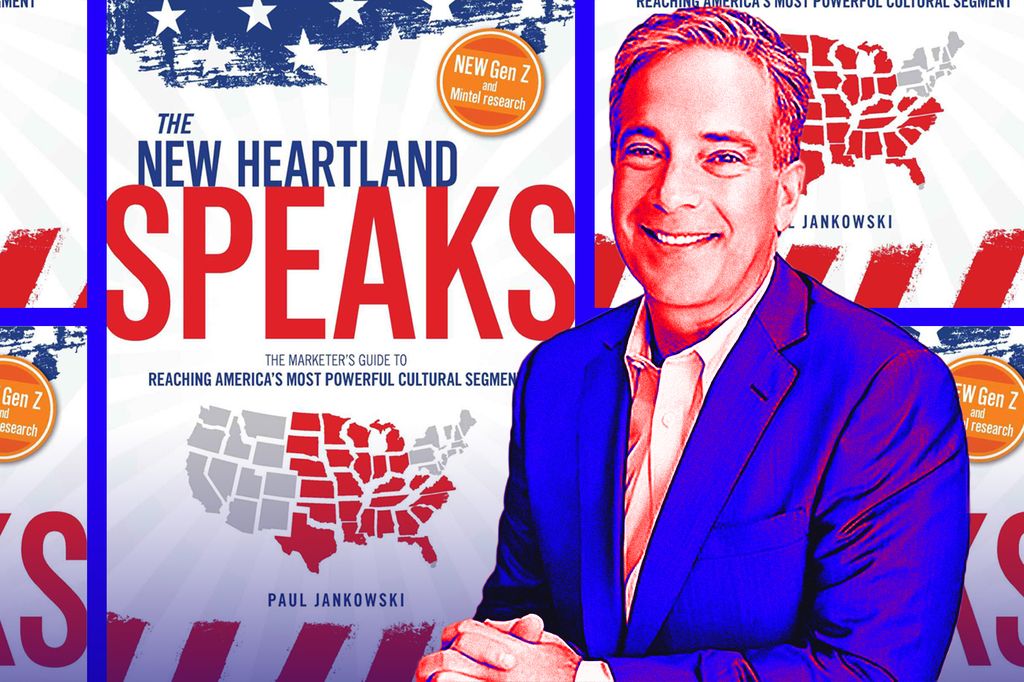 Paul Jankowski has made a career of paying very close attention to what some coastal elites think of as “flyover country.”

The founder and CEO of Nashville-based marketing agency/consultancy New Heartland Group has worked with brands including Pepsi, Mtn Dew and FedEx, and has just published his third book, “The New Heartland Speaks: The Marketer’s Guide to Reaching America’s Most Powerful Cultural Segment.” Jankowski will be taking the virtual stage at Ad Age’s Aug. 3-5 Small Agency Conference & Awards to share his insights.

In “The New Heartland Speaks,” he presents his analysis of data derived from the New Heartland 2020 Generational Study commissioned by his firm. The research parses how Gen Z, Millennial and Gen X consumers in the New Heartland—Jankowski’s term for a collection of 26 states that represent a, you might say, certain state of mind—compare to their coastal peers in terms of brand perceptions, cultural preferences and more.

At Small Agency, we’ll be talking to Jankowki about how political outcomes will affect marketing—before and after Election Day—and what agencies and brands need to do to remain relevant (or at least not tone-deaf) amidst the current cultural moment.

In conjunction with Ad Age’s Campaign Trail coverage—our continuing analysis of politics through a marketing lens—media/politics columnist Simon Dumenco spoke with Jankowski in advance of his Small Agency appearance.

This conversation has been lightly edited and condensed.

First, let’s talk about what the New Heartland Group does—what your mission is.

We are a brand-building agency focused on the 60 percent of customers living in the New Heartland. While our research asks political questions, we are a nonpartisan agency that studies the culture, values, lifestyle and attitudes of the New Heartland. We do not support a particular candidate. We try to understand how and what folks in the New Heartland feel about a myriad of topics, including who they will vote for.

Trying to understand the core, the heart, of America seems urgent still, given that the media and pundit class notoriously ignored and misread the heartland voters that handed Trump his victory four years ago.

The 2016 election really put the polling methodology in this country to the test. And yes, many missed the mark, with most major pollsters confidently predicting a Clinton landslide victory.

As we began the New Heartland 2020 Generational Study, we kept this larger public view of current polling front-of-mind, and set out to use a methodology that was clear and concise with little room for misinterpretation. The results really do speak for themselves, and I do believe we discovered a treasure trove of data in this demographic that could end up being crucial information in the fight to win the White House.

Give us a top line on one of your major findings.

It’s not his die-hard supporters Trump will have to worry about—he has those, and they’re not going anywhere. However, if the president thinks that means the New Heartland is a box-check for his reelection, he’d better think again. According to our findings, it’s the younger, first-time, Gen Z voters who will likely end up deciding who takes the big Electoral College prizes in this region, and they surprisingly break away from their historically conservative roots. This leads us to believe that these Gen Z voters in the New Heartland will give the Republican party its biggest challenge, and could very well be the deciding factor this November.

Your definition of the New Heartland includes not only some of the traditional swing states, but states that became swing states in the Trump era.

In the 2016 election, historically blue states unexpectedly turned red overnight. Michigan, which had reliably voted Democrat since 1992, was two-tenths of a percentage point away from choosing Hillary Clinton. Wisconsin had been voting Democrat for even longer, with their longest spell lasting from 1988 until it flipped the hypothetical switch in 2016. Of the 29 states that went red in the 2016 election, all but six are situated within the New Heartland. It’s why this group is so important to understand going into the 2020 election.

If current mainstream polling is to be trusted, we’re seeing a softening of support around the edges of Trump’s base—though, as you said, presumably not his hardcore supporters. If this softening is real, what do you think is the biggest factor causing that right now?

And their discontent is trickling into their election decision. Our study revealed just 24 percent of New Heartland Gen Zers and 38 percent of Millennials plan to vote for Trump, and that was before COVID-19 and the reignited Black Lives Matter movements in many major New Heartland cities.

So the question is, will they really vote?

From 2014 to 2018, the amount of Millennial participation in midterm elections nearly doubled. Of the eligible Gen Z voters, 30 percent showed up at the polls for a midterm election, which historically has yielded pathetically low turnout. This year, Pew Research projects that one of every ten eligible voters will represent Gen Z, and could account for 24 million votes—if turnout is flawless.

To put their potential power into perspective, Trump won by just 80,000 votes concentrated in two New Heartland states—Michigan and Wisconsin—and Pennsylvania, a non-New Heartland state. Trump will need to gain a share of the young vote in his New Heartland base if he hopes to be a two-term president. To get their attention, he’ll need to understand a few things about them first.

Young voters in the New Heartland having mixed political views. According to our study, fewer and fewer younger New Heartlanders are identifying as conservative. Less than a fourth of Millennial and Gen-Z respondents to the study considered themselves conservatives. Initially we were surprised to see 32 percent of Gen Zers and 43 percent of Millennials identify as Independent. But the findings track similarly with Pew Research results, which show Midwestern moderates increasing from 33 to 37 percent from 2010 to 2017.

Thanks, Paul—and let’s leave it there for now. We’ll have a lot more to discuss  at the Ad Age Small Agency Conference. Meanwhile, how about another plug for your book?

Sure! “The New Heartland Speaks: The Marketer’s Guide to Reaching America’s Most Powerful Cultural Segment” is available now.