Fire your CMO? This year's ANA meeting was full of heat | Ad Age
Skip to main content
Sign In Register

It was hardly the kind of presentation title you'd expect at a marketing conference geared for CMOs. But the talk, led by investment banker Terry Kawaja of Luma Partners, proved to be one of the more popular sessions at the Association of National Advertisers annual "Masters of Marketing" conference, which drew an estimated 3,000 people to the Rosen Shingle Creek resort in Orlando resort.

The title: "Fire your CMO."

Kawaja's provocative talk was about how direct-to-consumer startups like Airbnb and shaving marketer Harry's are eating away at big established behemoths like Procter & Gamble Co. by using highly tailored marketing based on first-party data and artificial intelligence.

The new players are led by leaders more aptly described as "chief growth officers" than chief marketing officers, Kawaja noted. He questioned the ability of older brands, and their leaders, to operate in this new world and launch their own direct-to-consumer brand. "Think about a middle-aged white man trying to dance," Kawaja quipped, using a derisive analogy.

But the fact that the talk drew a big crowd shows that the hundreds of marketing execs that came to the event are embracing their new reality. CMOs might not have a choice: Pay attention to the new trends sweeping the industry or risk getting fired.

Below, a look at five takeaways from this year's four-day confab, which wrapped up on Saturday.

There was a constant drumbeat about the need for marketing execs to "take our industry back," as they battle threats including the opaque digital media supply chain. Procter & Gamble Co. Chief Brand Officer Marc Pritchard suggested that "it feels like marketing needs a marketing campaign," in a comment that hinted at the industry possibly losing its cool factor. American Express CMO Elizabeth Rutledge said the title of marketer should be recast as "collaborator," in a reference to the fact that today's CMOs must work across multiple disciplines, including technology.

Google and Facebook may have paid for lunch (and given sponsored presentations on Thursday and Friday), but marketers were still grumbling about how difficult it is to get data out of them, a phenomenon knowns as "walled gardens." A hot topic among ANA board members, who met privately, is the difficulty of getting consumer data across digital platforms to do things like prevent people from being inundated with the same ads, according to P&G's Pritchard, who is chairman of the board.

Lou Paskalis, Bank of America's senior VP of customer engagement and media, called walled gardens an "existential threat to marketing," during an on-stage Q&A. He said it is time for marketers to assert their rights to data they need to make their media buys smarter. And he suggested marketers should get more aggressive calling out the digital giants, "naming names about who's doing it right and who's lagging."

Another executive, who asked to remain anonymous because he does business with Facebook and Google, said the grumbling about data sharing has intensified to the point that it's time for marketers to vote with their dollars rather than just complain. It's possible to assemble campaigns across digital players that cooperate more on data sharing than the duopoly of Google and Facebook do, while achieving the same reach, he said. But marketers "are too lazy to do it."

If you thought GDPR was bad for digital brand marketing, wait till California's new data privacy law takes effect in January 2020. It is "essentially GDPR on steroids," Doug Wood, ANA's general counsel and Reed Smith partner, said in a presentation. The law, called the California Consumer Privacy Act, includes an "anti-discrimination" provision that prohibits brands from setting different prices depending if consumers opt-in or opt-out to share their personal data. That raises all kinds of questions, Wood noted. For instance, what happens if brands reward consumers who opt-in to share personal data with better loyalty cards? "Is that discrimination in pricing?" Wood asked. "That's a question that is going to have to be answered."

Wood is in favor of a national data law so brands don't have to deal with different legislations across state borders "It's going to be total chaos if we don't have national legislation," he said.

In a development that won't make agencies happy, marketers spent a good chunk of the week celebrating their in-house shops. 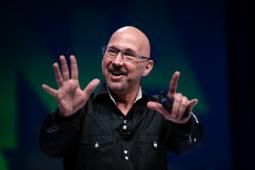 "Major high five," Progressive Insurance Chief Marketing Officer Jeff Charney said from the main stage, cheering a new report from the ANA showing that 78 percent of marketers have some form of in-house agency, up from just 58 percent five years ago.

Verizon, which opened its own internal agency called "140" about 18 months ago, even had its own presentation on the topic. Warren Chase, who runs Verizon's in-house shop, said he works hard to ensure his team doesn't fall into the "corporate" trap of looking like an episode of "The Office." Part of that is helped by the presence of Andrew McKechnie, chief creative officer at 140 and a former creative director at Apple.

P&G's Pritchard talked about ways his marketers are doing more without the help of agencies to get closer to consumers. In an interview Thursday, the same day WPP stock plunged as much as 20 percent on disappointing earnings news, he acknowledged that agencies should be worried, though he believes they'll adapt.

"At the beginning of the year, there was a lot of gnashing of teeth" when P&G talked about moving more work in house and away from fixed agency-of-record assignments and more to "flow" project pitches, Pritchard says.. "But we've worked together."

Hershey CMO Jill Baskin in a Saturday morning session touted the candy marketer's in-house content studio that launched five months ago. By shooting some ads in-house, Hershey pumps out content more quickly, she said. "I am here to tell you anyone can do this," she said.

This isn't the last we'll be hearing about the in-house trend: the ANA is hosting its first conference on in-house agencies in March.

The FBI probe into agency media-buying practices was not on the formal agenda, but it came up in some subtle and not-so-subtle ways. Wood, the ANA general counsel, fielded a question about it at the end of his speech on GDPR. He then detailed the sorts of criminal charges agency executives could face, including fraud and conspiracy. 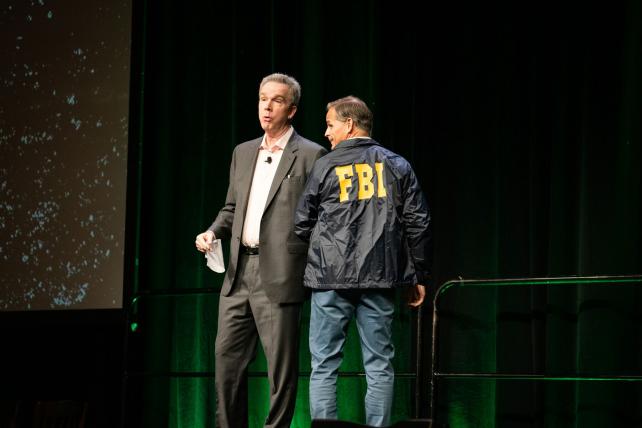 Luma's Kawaja seemingly trolled agency attendees by putting on an FBI jacket at the tail end of his presentation. Joining him on stage, Bill Duggan, group executive VP at the ANA, quipped that Kawaja would "scare the hell out of a lot of people," if he walked the event wearing the jacket. And indeed, Kawaja kept it on while strolling vendor booths. He even wore it at an off-site party hosted by MediaLink, the powerful advisory firm whose practices include matching clients to agencies.