Use of Unauthorized TV, Movie Sites Expected to Grow

How do consumers feel about "stealing" video content off the web? Well, we wouldn't dream of asking the question that way, but we did ask a large, nationally representative population how they felt about watching free movies and TV programs, sans commercials, from unauthorized sites that are unaffiliated with the studio or network that produced or distributed the content.

We also asked consumers if they thought they would use these sites more in the future, and 15% of all age groups said yes. Perhaps of even more concern, among consumers who have not watched video online regularly, about 15% expect to use unauthorized sites in the next year.

Technology has made it possible to steal programming online, and many consumers seem totally comfortable doing so. Sounds like Napster to me. 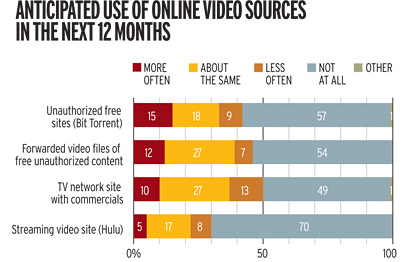